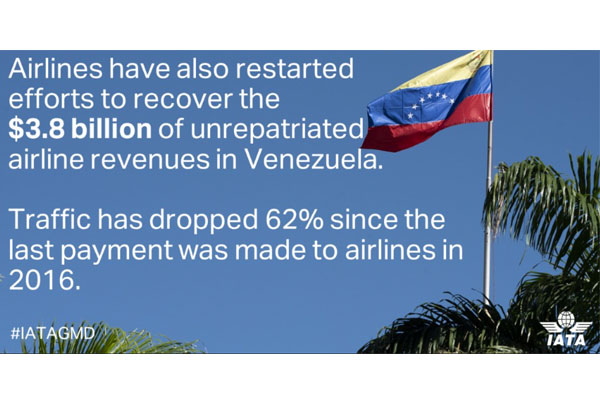 Airline funds are being blocked from repatriation in more than 27 countries and territories.

GENEVA – The International Air Transport Association (IATA) warned that the amount of airline funds for repatriation being blocked by governments has risen by more than 25% ($394 million) in the last six months. Total funds blocked now tally at close to $2.0 billion. IATA calls on governments to remove all barriers to airlines repatriating their revenues from ticket sales and other activities, in line with international agreements and treaty obligations.

IATA is also renewing its calls on Venezuela to settle the $3.8 billion of airline funds that have been blocked from repatriation since 2016 when the last authorization for limited repatriation of funds was allowed by the Venezuelan government.

“Preventing airlines from repatriating funds may appear to be an easy way to shore up depleted treasuries, but ultimately the local economy will pay a high price. No business can sustain providing service if they cannot get paid and this is no different for airlines. Air links are a vital economic catalyst. Enabling the efficient repatriation of revenues is a critical for any economy to remain globally connected to markets and supply chains,” said Willie Walsh, IATA’s Director General.

Airline funds are being blocked from repatriation in more than 27 countries and territories.

The top five markets with blocked funds (excluding Venezuela) are:

Nigeria
Total airline funds blocked from repatriation in Nigeria are $551 million. Repatriation issues arose in March 2020 when demand for foreign currency in the country outpaced supply and the country’s banks were not able to service currency repatriations.

Despite these challenges Nigerian authorities have been engaged with the airlines and are, together with the industry, working to find measures to release the funds available.

“Nigeria is an example of how government-industry engagement can resolve blocked funds issues. Working with the Nigerian House of Representatives, Central Bank and the Minister of Aviation resulted in the release of $120 million for repatriation with the promise of a further release at the end of 2022. This encouraging progress demonstrates that, even in difficult circumstances, solutions can be found to clear blocked funds and ensure vital connectivity,” said Kamil Al-Awadhi as Regional Vice President for Africa and the Middle East.

Venezuela
Airlines have also restarted efforts to recover the $3.8 billion of unrepatriated airline revenues in Venezuela. There have been no approvals of repatriation of these airline funds since early 2016 and connectivity to Venezuela has dwindled to a handful of airlines selling tickets primarily outside the country. In fact, between 2016 and 2019 (the last normal year before COVID-19) connectivity to/from Venezuela plummeted by 62%. Venezuela is now looking to bolster tourism as part of its COVID-19 economic recovery plan and is seeking airlines to restart or expand air services to/from Venezuela. Success will be much more likely if Venezuela is able to instill confidence in the market by expeditiously settling past debts and providing concrete assurances that airlines will not face any blockages to future repatriation of funds.

IATA and Travalyst to collaborate on flight CO2 emission calculations