Are corporate travel programs getting the hotel rates they negotiate? 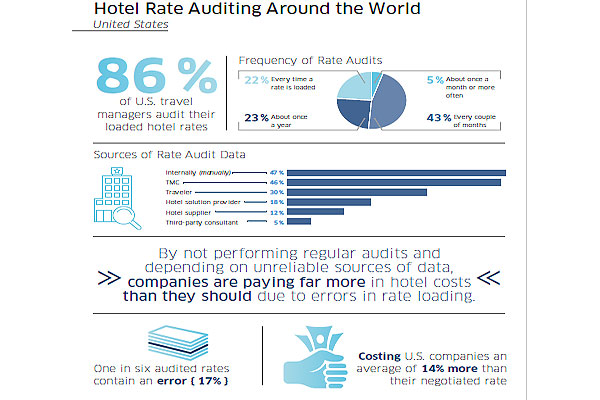 Globally, 86 percent of travel managers audit their negotiated hotel contract information, including rates, amenities and other negotiated features, once it is loaded into the system to verify its accuracy.

The GBTA Foundation, the education arm of the Global Business Travel Association, in partnership with HRS Global Hotel Solutions, conducted a global survey to assess if and how travel managers audit their hotel rates as well as reasons why some travel programs choose not to do so.

Kate Vasiloff from GBTA Foundation says, "Globally, 86 percent of travel managers audit their negotiated hotel contract information, including rates, amenities and other negotiated features, once it is loaded into the system to verify its accuracy. However only a minority checks on their rates frequently, with six percent auditing monthly and three percent on a weekly basis. Among those who do not perform hotel rate audits, 42 percent say it is because they have no internal resources to do so and 16 percent say they have no budget to outsource the task. Additionally, 35 percent rely on their Travel Management Company (TMC) to check the rate, 32 percent trust the hotel to do this for them and 18 percent believe performing such audits does not have a significant impact on the rate, so it’s not part of their priorities.

Given that one out of six audits (17 percent) reveals a discrepancy between what was negotiated in the contract and what appears in the system, most often involving the rate, this could be a missed revenue-saving opportunity for travel programs who do not perform rate audits. In fact, those who say they don’t have the budget to outsource the task are probably at a greater risk than most for overpaying mis-loaded rates and could potentially recoup the money spent on outsourcing this by catching all the errors.

In looking at the companies who do perform this audit, 52 percent use internal resources and check the rates manually, 38 percent outsource it to their TMC, 15 percent outsource to their hotel solution provider and 11 percent outsource it to another third-party consultant. Furthermore, 16 percent rely on reports from their hotels and 36 percent rely on travelers to report back to them when the rate is not correct. Considering the potential cost savings of verifying these rates, relying on travelers or hotels to report errant rates may not be the most effective way to manage this".

“The research results show that a closer look at the rates is necessary,” explains HRS CEO Tobias Ragge. “Travel managers work hard to negotiate cost-effective hotel rates and desired amenities for their travelers as an important component to a successful corporate travel program, but this all becomes undone when a significant share comes with errors and their travelers don’t get what was negotiated.”

By not performing regular audits and depending on unreliable sources of data, companies are paying far more in hotel costs than they should due to errors in rate loading. Conducting audits to ensure accuracy can help strengthen a travel program.