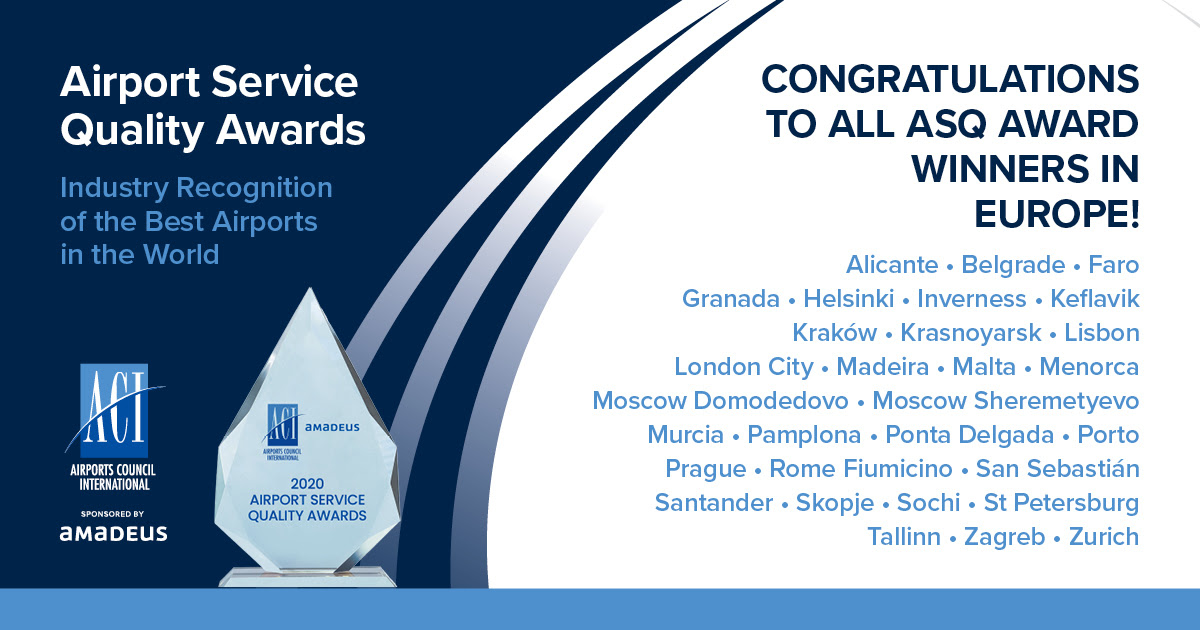 Airport Service Quality awards based on the views of customers in 2020.

BRUSSELS – ACI Europe has revealed this year’s winners of the Airport Service Quality (ASQ) awards in Europe. The awards highlight the world’s best airports as judged by their customers.

The COVID-19 pandemic had a dramatic impact on global passenger traffic in 2020 as well as changing customer perceptions and expectations of the airport experience.

Based on new hygiene related questions added to the survey questionnaire, ACI has introduced a new award – ‘Best Hygiene Measures by Region’.

There are 15 inaugural ‘Best hygiene measures’ winners in Europe. These additional questions provided airports with a reliable method of gauging customer response to new health measures while the new award recognizes airports’ success in responding to the intense focus on hygiene. It also complements ACI’s Airport Health Accreditation programme, launched last year, which has resulted in more than 240 airports being accredited already.

Despite the challenge to collect departure survey responses in 2020, airports in Europe managed to collect data throughout the year, and the new Hygiene category enabled airports to measure their customer experience with safety and hygiene, crucial during this time.

Olivier Jankovec, Director General of ACI Europe, said: “These accolades signify the very essence of Europe’s airports: resilience teamed with the highest standards of customer care.  This has been the toughest year in our industry’s history, and the effects of the pandemic have hit hard as passenger numbers plummeted, workforces were reduced and local communities were paralysed by travel restrictions.  So more than ever, bravo to all our winners, and to each and every member of our airport community as they continue to deliver excellence in the face of adversity”.

Under 2 million passengers per year

2 to 5 million passengers per year

5 to 15 million passengers per year

15 to 25 million passengers per year

25 to 40 million passengers per year