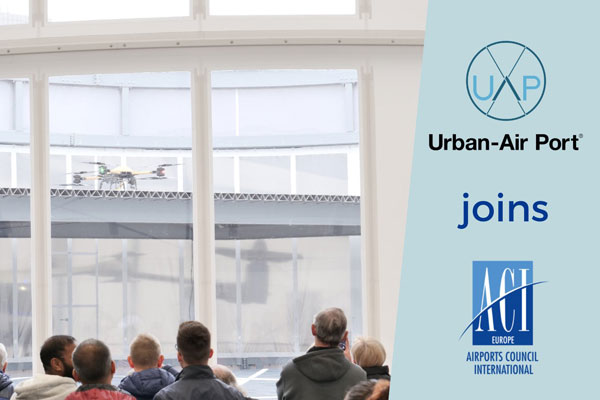 BRUSSELS – ACI Europe welcomes its first vertiport operator into the membership, with the announcement that Urban-Air Port is joining the association.

The potential for Urban Air Mobility (UAM) services to be deployed at an airport as well as at new dedicated sites is rapidly developing as one of the most exciting new paradigms in aviation. New aircraft and air traffic management technologies offer the prospect of electric vertical take-off and landing (eVTOL) aircraft offering innovative advanced mobility solutions. This creates new opportunities – and regulatory requirements – for airports and vertiports, as explored in ACI EUROPE’s UAM Position Paper.

For Europe’s airports, eVTOL technology offers new opportunities for feeding traffic between airports, cities and regions, and a highly complementary role as a hub for low-carbon transport and traffic. As such, the integration of vertiport capabilities and related infrastructure both operational and virtual is a logical next step for many airports, and a timely and relevant addition to the European airport association’s membership footprint.

Olivier Jankovec, Director General of ACI Europe, said: “The inclusion of Urban-Air Port into our membership is incredibly significant. Airports are not just transitioning to sustainable and digitised operations, they are transforming – at the forefront of what it means to be a driver of environmentally relevant innovations and services. Vertiports will become an intrinsic part of that journey – both within existing airport infrastructure and as new stand alone mobility infrastructure. I’m thrilled to welcome them on board, as ACI Europe looks at bringing together and serving both conventional airports and vertiports.”

Andrea Wu, Chief Operating Officer, Urban-Air Port, said: “Urban-Air Port offers a turnkey solution to our clients including Ground Infrastructure, the Digital and Air Infrastructure. Certification and Legislation are key aspects to the Advanced Air Mobility sector and we are excited to have created the first precedent earlier this year. We are delighted to work with ACI EUROPE and partners to tailor our solutions for the rapidly evolving industry. The synergies with airports are clear and the partnerships we can forge with them will be nothing short of transformative.”

Ricky Sandhu, Founder & Executive Chairman, Urban-Air Port said: “We are building on the successful work UAP has done with the UK CAA in Coventry, with over 150 safe logistics done operations in an urban environment. UAP celebrates this opportunity as being a part of ACI EUROPE which also unlocks relationships with ACI World and the other ACI Regions”.

Nearly 4 in 5 American travelers have experienced issues this year