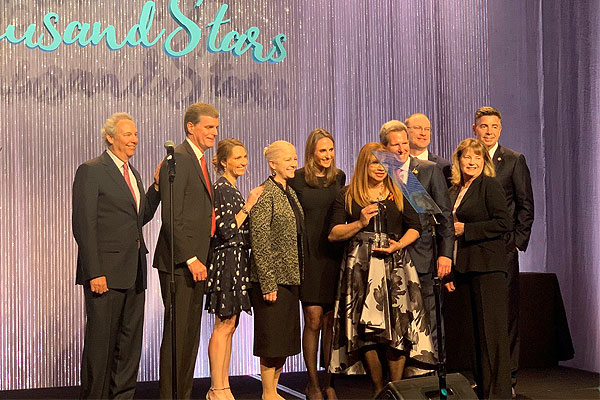 LOS ANGELES – The American Hotel & Lodging Association (AHLA) and the newly rebranded American Hotel & Lodging Foundation (AHLA Foundation) announced the top hotel employees across the country, culled from more than 300 nominations across every company and numerous career pathways. The 2020 Stars of the Industry Awards are the industry’s highest honors revealed each year at second annual “Night of a Thousand Stars” Gala, the Foundation’s premier fundraiser. The event raised a record total of over $700,000 to support its mission.

The event also featured the announcement the newly named American Hotel & Lodging Foundation (AHLA Foundation). As the Foundation continues to grow and scale its programs moving into 2020 and beyond, it will expand its Empowering Youth Program from six cities to 10, introduce new apprenticeship programs, grow the Debt-Free College Program and award more than $1 million in scholarships

The evening’s highest honor, the North Star Award, given to someone who demonstrates leadership and extraordinary devotion to this industry, was awarded to Amparo Torres, Executive Housekeeper, Hampton Inn & Suites Orlando/East UCF Area, Orlando, Florida. A 21-year veteran of the Hampton Inn & Suites Orlando/East UCF Area, Amparo is the heart and soul of the property; always prioritizing her team members, her guests and her community. Amparo treats everyone like family, even opening her home to care for a team member undergoing aggressive chemotherapy. Her warm spirit has been recognized twice by Hilton with the Spirit of Pride and CEO Light awards.

“The Stars of the Industry awards demonstrate how our industry really does offer people a true path to the American Dream for the 8.3 million people whose jobs we support. No matter the position, every single person in a hotel contributes to our success as an industry, and we are thrilled to have this opportunity to celebrate them,” said Chip Rogers, President & CEO of AHLA. “Every person honored tonight goes above and beyond for their guests and our hotels, showing their dedication to our industry day in and day out. It is an absolute honor to be here tonight, recognizing the people who do so much – they are all truly stars.”

The award ceremony, held ahead of the Americas Lodging Investment Summit (ALIS) at the InterContinental Los Angeles Downtown and sponsored by IHG, featured remarks from new incoming AHLA Board Chair Jon Bortz, President & CEO of Pebblebrook Hotel Trust. The event was also attended by several Foundation beneficiaries who have received a scholarship or training from the Foundation.

This year’s Stars of the Industry were selected by a panel of industry leaders.

AHLA’s 2020 Stars of the Industry winners are listed below.

North Star Award Finalists: Mark Garrett, Stewarding Supervisor, Hilton Columbus at Easton, Columbus, Ohio – Known for his positive attitude and selflessness, Mark leads by example on his team at the Hilton Columbus at Easton. After an 800-person wedding on property, Mark came in on his day off to personally clean every single dish without being asked to help lighten his coworkers’ load. A winner of the Columbus Stars of the Industry Service Superstar award, Mark’s dedication behind the scenes allows the rest of the team to shine for their guests.

Azra Zecirovic, Cook, The Westin Buckhead Atlanta, Atlanta, Georgia – Nicknamed “Mama,” Azra has spent 19 years going above and beyond in her position and caring for her staff at The Westin Buckhead Atlanta. Azra’s passion for hospitality radiates not only in the creative dishes she executes for guests, but also in positive attitude. She often says, “If you do not have love or passion for what you do, then you will not be happy.”

Outstanding General manager of the Year (Small Property): Marc Kassouf, General Manager & Innkeeper, Quiet Creek Inn, Idyllwild CA – Marc is responsible for not one but two boutique properties. Prioritizing preservation, he rescued both historic and iconic inns from failure or closure without significant initial capital, focusing on low cost, high benefit improvements, continuing to reinvest returns to upgrade and enhance these mountain properties positioning them for long-term success. He is also dedicated conservation and community, creating the Pink Prism Fund, which coupled with property contribution, has delivered over $30,000 to local nonprofits over a 3-year period. In his spare time, Marc helps to mentor other innkeepers by hosting workshops and educational seminars in technology, systems, processes and revenue management.

Outstanding General Manager of the Year (Large Property): Debi Bishop, General Manager, Hilton Hawaiian Village Waikiki Beach Resort, Honolulu, Hawaii – Debi is a veteran general manager, overseeing more than 2,000 team members at the largest property Hilton’s nearly 5,900 hotel portfolio. Since her start, she has driven record-breaking occupancies and revenues, constantly looking for opportunities to enhance her guests’ experience. Her leadership has not gone unnoticed, having been recognized multiple times, including with the “Genius of the And” award – one of the top awards given out by Hilton.

Paving the Way Award: Terri Haack, President, Terranea Resort, Rancho Palos Verdes, California – Terri has spent her 35-year career mentoring young, talented women in the hospitality industry. A pioneer known for turning obstacles into opportunities, she is committed to creating a unique workplace culture where individuals can build their careers, provide for their families and pursue their individual dreams, while also ensuring a distinctive experience for her guests. She is also renowned in her community, promoting charitable efforts is a cornerstone of her property’s programming – from donating partially consumed, wholly usable toiletries to providing more than 14,000 pounds of surplus food to the local area.

Stevan Porter Emerging Hospitality Leader Award: Colin James-Sarner, Night Manager, Embassy Suites by Hilton Atlanta at Centennial Olympic Park, Atlanta, Georgia – A survivor of homelessness, Colin rose through the ranks after finding solace in a career in the hotel industry. He is known for making a difference both big and small, he can often be found jumping in to provide support for his staff at the front desk. Never forgetting the guest, he developed a program to specifically recognize loyalty members, even providing them with personalized gift bags upon arrival.