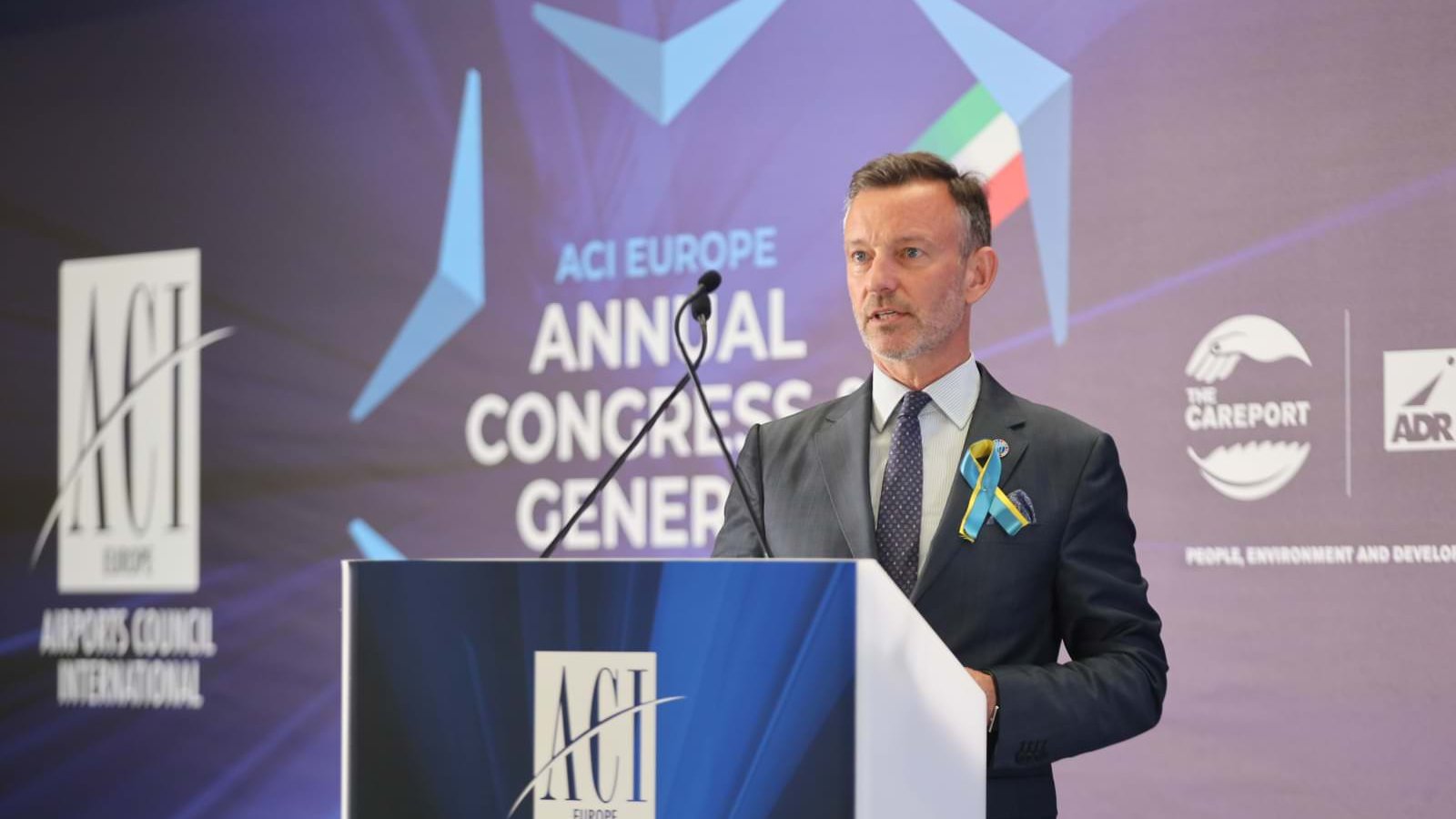 Jankovec paints a bleak financial picture as debt-ridden airports will struggle to invest – and sets out ‘new value creation business model’ in response.

BRUSSELS and ROME – Opening the 32nd ACI Europe Annual Congress and General Assembly in Rome, Director General Olivier Jankovec described an industry with a clear vision for its future societal and economic role – but fighting for the financial stability to get there.

Continued and systemic financial weakness
Europe’s airports are still reeling from the unprecedented revenue collapse caused by the pandemic, which resulted in historic losses reaching cumulatively over 20 billion euros1 over the past 2 years – a seismic economic shock to any industry.

With Governments having mostly focused their financial support on airlines and cost cutting opportunities all but exhausted, European airports had no other option than to pile on debt – resulting in total airport debt and liabilities having increased by a massive €60 billion compared to pre-pandemic.

A cost intensive and revenue weak recovery
While passengers are returning to the skies this Summer, the traffic recovery for airports nonetheless remains revenue weak and cost intensive. Overall, passenger volumes remain below 2019 levels for most airports, with demand tending to be concentrated on peak periods. This not only puts significant stress on operations in the context of an acute staff shortage, it also drives costs upwards – with spikes in cash outflows.

At the same time, increased airport competition is exacerbating relentless pressures from airlines on airport user charges, with regulators still too often listening to airline allegations rather than letting airports address their legitimate and proportionate financial requirements.

Investment crunch worsening
In that context, restoring earnings to pre-pandemic levels will be challenging – and combined with debt servicing,  there is no escaping the fact that airports are facing an investment crunch. The reduction in capital expenditure from Europe’s airports over the past 2 years amounted to 7 billion euros – with yet more to come as inflationary pressures only make the situation worse.

Inflation has started hitting airports hard, driving their operating expenses up – in particular for staffing and energy costs, which together amount on average to 45% of an airports’ operating costs.

European airports need around 360 billion euros in capital expenditure in Europe in the 20 years to 20402. But inflation has also started to impact their investment decisions, as steep increases in the cost of materials and supplies now calls into question the viability of those investments that had been sustained.

Said Olivier Jankovec: “Over the past year, we have been warning of the risk of an airport investment crunch due to ballooning debt levels and much challenged revenue generation. There is no question but that the inflationary spiral we are now in is only making things worse. Airports will simply not be able to pay back their debt and invest at the same time”.

“This is about our ability to finance the decarbonisation of our facilities, but also support airlines’ efforts to do so – and thus aviation as a whole.  And yes, it is also about our ability to address current operational disruptions caused by staff shortages now and in the medium term. Further automation and digitalisation will be essential not just to increase operational efficiency and improve the passenger experience but also to build more resilience”.

“In that context, IATA’s astonishing call for airports not to raise their user charges despite the fact that airlines raise their fares to consumers defies economic gravity. It only amounts to yet another attempt to revive the aviation system of the 1960s, when airports were used as instrument of airline subsidisation”.

A new value creation business model
With European airports seeing their economics being turned upside down by structural revenue pressures and cost increases, and like all of aviation facing the challenge of decarbonisation and societal acceptability, Jankovec outlined a necessary transition and transformation of airports towards a new value creation model based on 3 pillars – sustainability, innovation and diversification.

Jankovec stressed that airports are now working in these  strategic directions, charting the way forward as ‘glocal’ businesses delivering value both to their stakeholders and to society as a whole – referring to recent examples of Aeroporti di Roma's "Careport", Groupe ADP’s “2025 Pioneers” and Brussels Airport’s “Shift 2027” vision.

In concluding, he warned that success and delivery of such ambitious projects will be conditional upon securing supportive and efficient policies and regulations – which must also ensure that the crucial role smaller and regional airports in ensuring territorial equality and cohesion is protected.