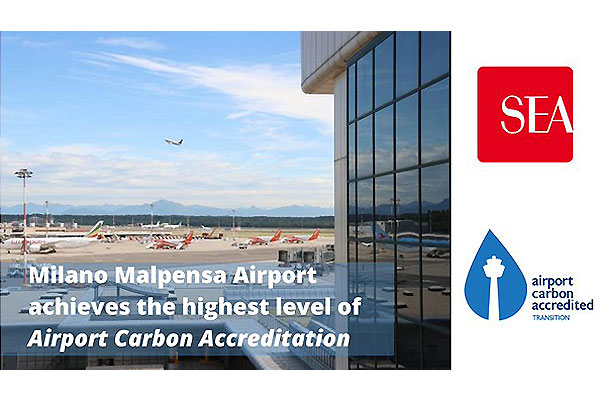 Attaining Level 4+ represents a step change in the carbon management of an airport. It requires setup of a long-term goal and strategy oriented towards absolute emissions reductions, including an emissions trajectory and interim milestones.

Milano Malpensa Airport has achieved Level 4+ ‘Transition’ of Airport Carbon Accreditation, following in the footsteps of its sister airport Milano Linate, which received this recognition earlier this year. The successful accreditation of both airports, brought about by operator SEA Group, is a continuation of the group’s long standing engagement in climate action. Both airports were part of the trailblazing group that joined the Airport Carbon Accreditation programme in its first year of existence. Illustrative of their leadership role in climate action, SEA Milano airports’ entry to the programme was at Level 3 ‘Optimisation’.

Attaining Level 4+ represents a step change in the carbon management of an airport. It requires setup of a long-term goal and strategy oriented towards absolute emissions reductions, including an emissions trajectory and interim milestones. Milano Malpensa Airport’s actions to realise tangible reductions of their own CO2 emissions are now aligned with the Paris Agreement. SEA Group has also included broader emissions in their carbon footprint that include all the significant operational sources on- and off-site. The airport has also demonstrated evidence of actively engaging and leading their operational stakeholders towards delivering emissions reductions. Looking to the future, SEA Group is actively supporting aviation’s decarbonisation through investment in a portfolio of projects developing Sustainable Aviation Fuel, producing green hydrogen and setting up infrastructure for electric aircraft.

A snapshot of initiatives implemented by the airport to progress towards these ambitious goals includes:
– Electrification of the ground vehicle fleet
– Contracting electricity from renewable energy sources
– Continuous improvement of infrastructure management to reduce energy consumption
– Reduction of emissions related to heating thanks to deployment of new heat pump systems (as part of the revamp of Terminal 2) and use of biogas
– Supporting the modal shift from private vehicles to public transport through improvement of accessibility for passengers and operators
– Implementation of the EU Horizon 2020 Green Airport project "OLGA" for the first hydrogen production site inside an airport
– Introduction of the supply of Sustainable Aviation Fuels in collaboration with business partners and airlines

Armando Brunini, CEO SEA Group said: “After the important “4+ Transition” recognition obtained by Milano Linate airport, one of the few European airports to be awarded, we are proud that few months later, Milano Malpensa airport has also achieved this significant goal. SEA, which manages both Milano airports, is committed to achieving Net Zero CO2 in 2030 and now more than ever we are focusing our efforts on contributing to decarbonisation. A path of attention to environmental sustainability, started a decade ago, has led us to undertake new initiatives and to invest today in innovative projects all with a focus on environmental protection: from electricity to hydrogen, to new solutions for the conservation of biodiversity in the areas surrounding the Malpensa airport.”

Olivier Jankovec, Director General ACI EUROPE said: "I am delighted at the news of Milano Malpensa’s excellent achievement of Level 4+ ‘Transition’ within Airport Carbon Accreditation. Once again SEA Group has shown its commitment to mitigating climate change by embracing the new ambitious level of the programme. Today’s news builds on years of hard work and perseverance in achieving a lowering of emissions since the very first year of Airport Carbon Accreditation’s operation. Hats off to the team that made it possible, especially given the current circumstances. Let us not forget that decarbonisation requires significant investment on the part of an airport, therefore continued climate action in the face of the COVID-19 crisis should be met with all the more praise!”

Latest programme developments
Despite the continued difficulties faced by the global airport industry in light of the pandemic, its commitment to decarbonisation remains resolute. This is illustrated by the growing Airport Carbon Accreditation participation across the world, most recently recording 373 accredited airports. The latest airports to join the programme are: