Passenger traffic in May reveals fading momentum at 3.1% 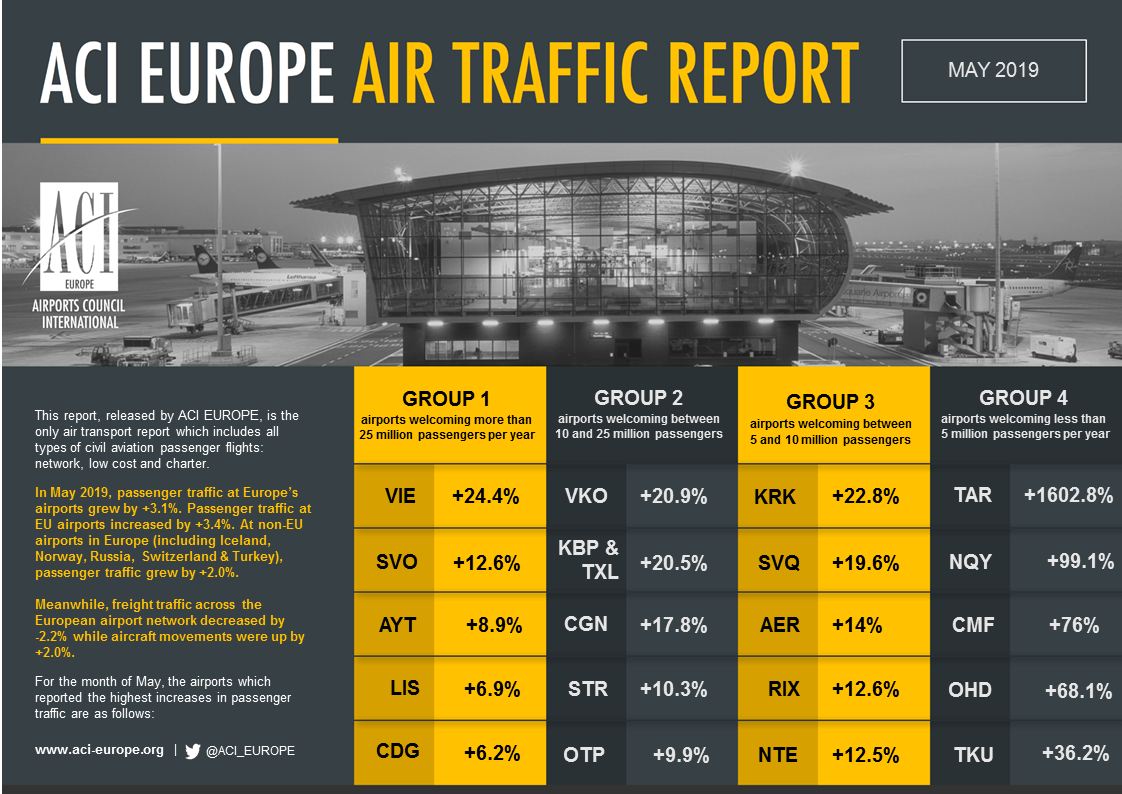 BRUSSELS – European airport trade association, ACI Europe releases its traffic report for May 2019, during which average passenger traffic in geographical Europe expanded by +3.1% compared with the same month in 2018. This is the weakest monthly performance so far this year, thus confirming the fading momentum in passenger traffic growth.

EU Market Softening & Non-EU Market Weaker
Airports in the EU market posted an average increase of +3.4% in passenger traffic in May – a significant slowdown in growth compared to the previous months (January-April: +5.1%).

Meanwhile, passenger traffic growth at non-EU airports remained weaker in May at +2% – in line with their performance of the previous months (January-April: +2.1%).

This was again mainly due to traffic losses at airports in Iceland (-30.4% in the wake of the bankruptcy of WOW), Norway (-1.4%) and Turkey (-3.5% – with the economic crisis weighing on domestic traffic in particular).

Majors & Small Regionals Underperforming
The Majors (top 5 European airports) registered passenger growth of just +1.2%. Paris-CDG (+6.2%) topped the league, partly due to a catch up from the impact of the strikes that affected Air France last year in May. Growth was far more limited at Frankfurt (+1.4%) as well as at capacity constrained London-Heathrow (+1.3%) and Amsterdam-Schiphol (+0.6%). The new Istanbul Airport (-3.6%) handled lower volumes compared to its predecessor (Istanbul-Ataturk) last year in May.

Olivier Jankovec, Director General, ACI Europe commented “The stall in passenger traffic growth at smaller regional airports is indicative of their fragility and the usually tougher trading conditions they face. As airlines are now becoming more risk averse, focused on protecting their yields and with consolidation progressing, developing or even maintaining current levels of air connectivity is going to be challenging for these airports.”

He added “In this context, the eco-labelled aviation tax announced yesterday by the French Government is self-defeating. By hurting the competitive position of the country’s regional airports, the tax will directly penalise the connectivity and thus the attractiveness of the regions in France. In the end, it is the less affluent people living there who will feel the effects. All this without even contributing to the decarbonisation of air transport. It is hard to see anything else than a mix of green & social washing in this initiative – and it is disappointing that the French Government did not take into account the data* that we at ACI Europe sent them last month on this subject.”

ACI Europe Airport Traffic Reports are unique in that they are the only ones to include all types of airline passenger flights to, from and within Europe: full service, low cost, charter and others.

European airlines will pay over 5bn. euros in environmental taxes and ETS contributions in 2019