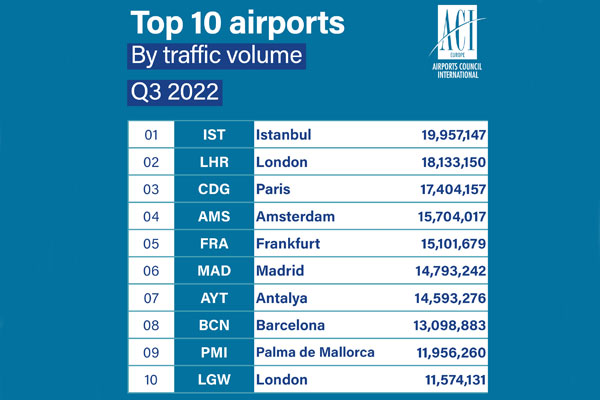 EU+ market surging in Q3 – with national variations
The EU+ market1 continued to drive the recovery, with passenger traffic at airports in the bloc increasing by +74% in Q3 compared to the same period last year. The best performances came from airports in the UK (+202%), Finland (+194%) and Ireland (+188%) – largely reflecting the fact that Governments in these countries had been slower to ease travel restrictions last year.

When compared to pre-pandemic (2019) levels, airports in the EU+ market were at -13%, with significant variations in recovery performance:

Airports in the largest EU+ aviation markets recovered at a slower pace – with France (-14.1%) posting the best results followed by the UK (-18.1%) and Germany (-25.9%). The exposure of these markets to intercontinental traffic (especially to Asia) as well as airport capacity restrictions at selected hubs in the UK and Germany acted as recovery‑limiting factors.

At airports in the rest of Europe2, passenger traffic increased by +18% in Q3 when compared to the same period last year. The best performance came from airports in Israel (+164.4%), while the loss of all commercial air traffic for Ukrainian airports and declining passenger volumes in Belarus (-15.9%) and Russia (-3.9%) dragged down the average for the non-EU+ bloc.

Recovery patterns shaping airport performance
Passenger traffic at the Majors (top 5 European airports) grew by +79.4% in Q3 compared to the same period last year – but remained -16.9% below pre-pandemic (Q3 2019) levels, mainly due to continued travel restrictions in parts of Asia.

Istanbul was the busiest European airport and the only major European hub whose passenger volumes exceeded pre-pandemic (Q3 2019) levels at +3%. Its passenger traffic increased by nearly +56.1% when compared to Q3 2021.

London-Heathrow came second followed by Paris-CDG. Volumes increased by +187.1% and +83% respectively for the British and French hubs compared to Q3 last year – standing at -18.4% and -19.9% respectively below pre-pandemic (Q3 2019) levels.

Capacity restrictions limited passenger traffic growth at Amsterdam-Schiphol (+54.1%) and Frankfurt (+62.3%) compared to Q3 last year. The Dutch and German hubs came in 4th and 5th position – with volumes for both remaining below -20% when compared to pre-pandemic (Q3 2019) levels.

The performance of selected other large airports in Q3 reflected a summer recovery still mainly driven by intra-European and transatlantic routes, and dominated by leisure demand:

Madrid only handled 2% less passengers than Frankfurt and was the 6th busiest European airport in Q3 (-14.5% compared to Q3 2019).

While Regional and smaller airports3 (+50.3%) grew at a lower pace than the Majors in Q3 when compared to the same period last year, they had almost recovered their pre-pandemic (Q3 2019) volumes: -3.7%.

Traffic momentum holding up in September
In September passenger traffic across the European airport network stood at -12% when compared to pre-pandemic (September 2019) levels.

Aircraft movements increased by +31% in Q3 across the European airport network compared to the same period last year, with airports in the EU+ market at +37% and those in the rest of Europe at +9%.