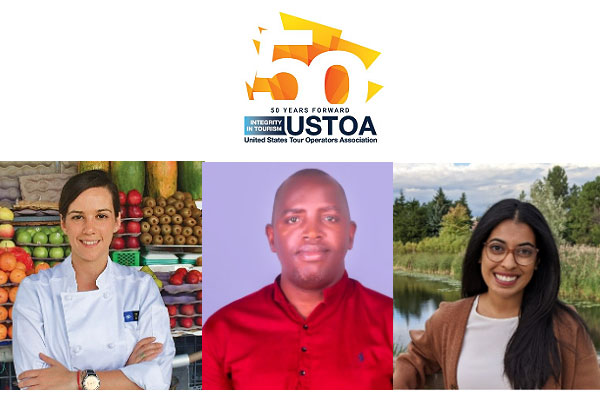 Three “Rising Stars” Recognized for Contributions to Sustainability and DEI.

NEW YORK – The United States Tour Operators Association announced the first USTOA Future Lights of the Tour Industry recipients, up-and-coming leaders who are being recognized as champions of sustainability and DEI (diversity, equality, inclusion) initiatives within their companies.

As the association marks its 50th anniversary by looking “50 years forward,” the USTOA Future Lights program invited tour operator members to nominate coworkers who have made a difference in helping their companies and the communities they touch embrace and address critical sustainability and DEI issues.

“It is with great pride and admiration that we recognize these USTOA Future Lights, each of whom will help lead our industry into a more sustainable, responsible, and equitable future,” said Terry Dale, president and CEO of USTOA. “As a pilot program that personified our ’50 years forward’ theme in our anniversary year, we found overwhelming support from our tour operator members, and it was so gratifying to see the strides our members are taking towards a more responsible and sustainable future for the tour industry.”

Meet the USTOA Future Lights
Ana Esteves honed her expertise in sustainability initiatives and sourcing from local vendors and farmers having worked at restaurants from Miami to Ho Chi Minh City. In her role as Vice President of Hotel Operations for Lindblad Expeditions, her exemplary skills create enhanced guest experiences with cuisine that is sourced from the regions being explored through an innovative Farm to Table program that supports local farmers and families, while inspiring the Lindblad culinary team across its 11-ship fleet.

As Abercrombie & Kent Philanthropy Coordinator in Uganda, Dennis Nyambworo has spearheaded every project supported by A&K in the country while articulating the challenges these communities face to an international audience. His programs to provide income for underprivileged women, enhancing education for school-age children, and overseeing expansion of safe water in the Bwindi region, among others, have dramatically improved tens of thousands of lives in one of the poorest regions of the world.

Nadine Pinto’s primary focus as Global Sustainability Manager for TTC & TreadRight is implementing How We Tread Right, the group’s five-year sustainability strategy, which includes efforts to address climate change. She has initiated its carbon measurement and reporting program that has enabled the company to develop carbon reduction targets, the first Science Based Targets for a private travel business of TTC’s size. She also oversees data collection and analysis for TTC’s Impact Reports which measures progress towards the groups’ sustainability goals.

“As part of a global organization that believes in and supports diversity, equality, inclusion, and sustainability, Trip Mate, a Generali company, is honored to support the USTOA Future Lights program,” said Trip Mate’s Chief Commercial Officer Kelly P. Sahner. “Through programs like this, our sponsorship of Tourism Cares, and our ongoing efforts to develop corporate-wide initiatives that promote DEI and sustainability, we strive to be advocates and leaders for responsible tourism in the travel insurance space,” she added.

Said Dale, “USTOA is blessed to have such engaged members, and I so appreciate the thoughtful care our tour operator members took to enter their candidates and the investment in time that each of our evaluators made to review the nominations.”

“In particular we are grateful for the support of Trip Mate, a Generali company, as the marquee sponsor of the USTOA Future Lights program,” he continued.

The USTOA Future Lights will be welcomed and acknowledged at a special ceremony during the USTOA Annual Conference and Marketplace in Austin, TX, November 28-December 3, 2022.