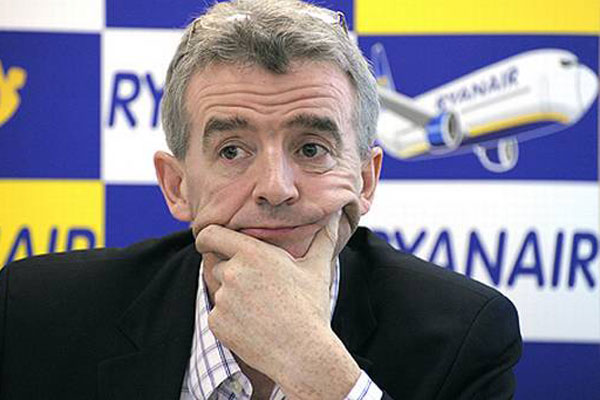 The business practice of the Irish company usually operates as a pressure lever, for better terms by the authorities in each country which attempts.

No sooner launched in 2017, the Commercial Director of the famous low-cost carrier (LCC) Ryanair pounced on several Greek Ministries for their adversely him affecting Tourism Policy.

Thus, it was announced by the company to cut 500,000 seats for routes to Thessaloniki.

The reasons for such action is described, truthfully, that there is a long delay in the completion of the runway project.

Naturally, the responsible Minister has promised several times, though not being verified by the facts, that the works will be finished in time.

Certainly the company has engaged in a barrage of correspondence from April 2016, with successive phases in September and November of that year.

As a result of Ryanair's Conflict with the Greek authorities came the decline, after more than 25 protest letters and communications, of the planning for flights to Greece.

Besides, the reduction activated throughout Hellas, moves slightly higher than 2% of available airline seats in the country, while backing away from a traditional destination like Kos.

While at the same time, repeated attacks on "Marie Antoinette" as is characterized, the Tourism Minister vehemently, while increasing by 12 its itineraries including in Budapest, Hungary, and from there to Valencia, Edinburgh and Prague, starting with 24 itineraries from Frankfurt to an equal number of European destinations.

The business practice of the Irish company usually operates as a pressure lever, for better terms by the authorities in each country which attempts.

It is a legitimate aim since today offers an extremely large narrow-type aircraft fleet of the latest generation aircraft, with constant new arrivals, and has experienced and capable pilots.
The nature of the company as a low-cost (LCC) requires objective and low fees in Greek airports, which are among the most expensive in Europe with prominent the Eleftherios Venizelos Αirport.

Afterthought, "the depth of the tunnel" seeks incentives and subsidies especially in the low season to increase the traffic, as opposed to what happens with incentives in the high season that are reaped by large Airlines, controlled by major Tour Operators.

O 'Leary might be peculiar, but he is also genius. He steps dynamically in business and needs optimization of the company's profit margin. He invents and implements continuous advancement program, and is hard to disappear, when all the more when he manages a company-range 350 aircraft.

While calculating the adverse effects of Brexit, notes the decrease in net profit of the company in the last quarter of 2016 to 101 million. US dollars, while the average load factor fell to 95% for each fleet aircraft.

Eventually the future will prove its worth or worthlessness of business applied.

He was born in Athens, Greece, 13 January 1947; admitted to Athens Bar Association 1974. Education: University of Athens, Law School (1972), London, (L.LM. 1980), specialized in Aviation Law and originally worked in the respective field on behalf of British Tour Operators and Charter companies.

With longstanding journalistic and writing activity, his articles have been published in financial newspapers and magazines specialized in Aviation and Tourism. Author of pioneering monographs on the development issues of Olympic Airways (1989), he has published during a course of many years, a series of articles regarding its viability, its position in the international environment, as well as for other private airlines in general, while at the same time he participated in relevant International and Greek Conferences and Organizations. Successful and long-term engagement with issues regarding private airports / heliports, Low Cost Carriers (LCC), Aircraft Fractional Ownership, Ground handling matters. At his law firm “EMM. GYZIS AND ASSOCIATES”, together with a group of specialized associates he deals mainly with aviation law issues (cooperation with construction companies for commercial aircraft and leasing companies) and tourism law issues, specializing in mass tourism from/ to Greece and occasionally cooperating with Tour Operators. Since 1993, he has founded a number of Greek and foreign airline companies, on behalf of his clients, in accordance with the applicable legal status. He has participated in committees for the drafting of legislation regarding air transport, such as private airports, the Presidential Decree for private heliports and the Basic Legislation of the Aviation Code and he is the General Secretary of the Hellenic Aviation Society. For many years, he has been studying emerging markets, as a consultant for foreign companies, which plan to invest worldwide.

Five tips for making the most of your next 'Bleisure' trip