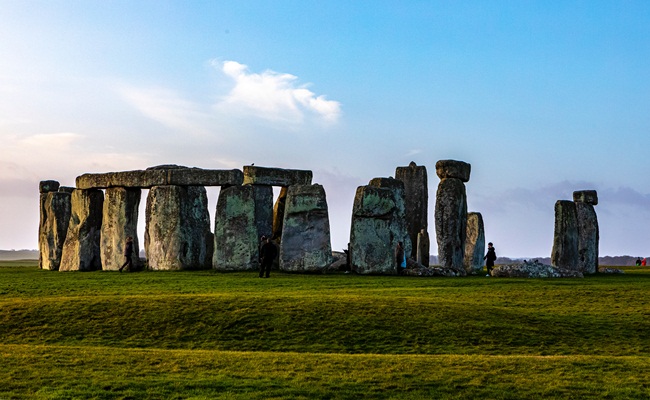 Even now, many consider this a sacred site and flock to the stones to celebrate the summer solstice

The British Isles are steeped in history, with evidence of human structures dating back more than five thousand years. From mysterious Neolithic buildings right through to nineteenth century grandeur, the history of England can be traced through what has been built by its inhabitants through the years.

Prehistory: Stonehenge and more
Stonehenge is the oldest and undoubtedly the most famous of England’s prehistoric landmarks. The complex was started around 3000 BCE, but the iconic stone circle was not constructed until 500 years after that. Little is known about the purpose of the stones, although many assume that they served a ritual function. Even now, many consider this a sacred site and flock to the stones to celebrate the summer solstice – the only day of the year that members of the public are permitted to approach and touch the stones.

Stonehenge is far from England’s only monument from prehistoric times. The county of Wiltshire also has a second Neolithic stone circle at Avebury. Also nearby is the Iron Age hill-fort of Old Sarum, constructed in around 400 BCE. This site continued to be important for around five centuries. It was used by the Romans, and later a mediaeval cathedral was built there.

Castles and fortifications
There are many examples of fortified structures all across England, many little more than scattered ruins today. Portchester Castle in Hampshire is a fine example of a mediaeval fortress, but its history goes back much further as well. The outer walls were in fact part of a Roman fort called Portus Adurni, part of the series of fortifications that stretched around the south and east coast of England, known as the Saxon Shore. While some ruins of other Saxon Shore sites remain, none are as well preserved as the ones at Portchester Castle.

Lincoln Castle is remarkable because it is still in use to this day as a courthouse. The Norman castle was ordered to be built by William the Conqueror, and it was completed just two years after he took the crown. The fortification was in a very strategic position and built on the foundations of the original Roman fortress of Lindum Colonia.

Pubs and casinos
Drinking and gambling are both popular with the English, and these supposed vices have been part of life since time immemorial. There is no way to know exactly which of the country’s drinking establishments holds the title of England’s oldest pub, but one strong contender is The Porch House in Gloucestershire. Although the current building was certainly built later, parts of the structure have been proved via carbon dating to originate in 975 CE. Other candidates include The Bingley Arms in Leeds, and Ye Olde Fighting Cocks in St Albans.

It’s a lot harder to find an example of a casino with that much history. Nowadays, gambling in the UK is regulated by the UKGC and the online industry offers a variety of safe and licensed gambling aites and instant withdrawal casinos, all of which are listed on NewCasinoUK.com. In these modern times, it’s easy to forget that until fairly recently, gambling was a much more clandestine activity. In the 1800s, there were some clubs where the wealthy elite went to partake in some games of chance, but most of these were not run as official casinos.

Probably the oldest that still functions as a gambling house is the Empire in London’s Leicester Square, dating back to 1884. Housed in the same Victorian building as the Odeon cinema, the Empire is where most of London’s film premieres take place. It’s one of the largest venues in England, and just like fast payout casinos online, anyone can play there.

Abbeys, churches and cathedrals
The ecclesiastical heritage of England is vast, and many of the oldest buildings that are still used for their original purpose belong to the church. One of the most celebrated, and oldest, of these buildings is Canterbury Cathedral in Kent, seat of the leader of the Anglican Church. Like many cathedrals, this enormous building was built over several decades. The cathedral was founded on its current site in 597 CE, but the majority of the existing structure was built between 1070 and 1174.

A great many of the other cathedrals in England were also built during the 11th and 12th centuries, hence the similarity in most of their styles. Many more abbeys, monasteries and other church buildings would still be standing today, if it weren’t for the actions of Henry VIII in the sixteenth century. During the dissolution of the monasteries, 625 monastic groups were disbanded and their buildings either repurposed or destroyed.

Some of these abbeys and other buildings remain only as partial ruins, while others disappeared almost entirely. Glastonbury Abbey, once second only to Westminster Abbey in wealth and importance, now has nothing but a few ruined walls to suggest at its former glory.