Eight attractions you need to experience in Rio de Janeiro 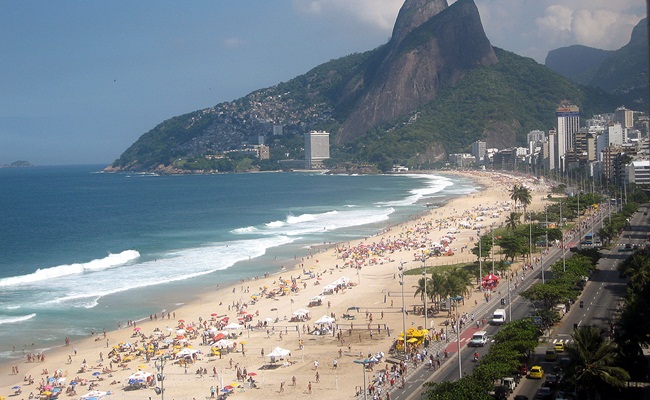 Here are some highlights of the city that you should not miss.

Formerly the capital of Brazil, Rio de Janeiro is one of the largest and most famous cities in the South American nation. Brazilians are known for their fabulous parties and warm hospitality, so be prepared for a superb experience in the heart of Brazil. Here are some highlights of the city that you should not miss:

Copacabana
World-famous Copacabana Beach is the official venue of the FIFA Beach Soccer World Cup, and is also known for its outstanding beauty. The Copacabana Promenade is home to a variety of shops, hotels and restaurants, and the area hosts a spectacular display of fireworks to ring in the New Year each year.

Christ the Redeemer
For most, the statue of Christ the Redeemer is the most significant symbol of Brazil. The welcoming stance of the Redeemer is a nod to the open hospitality that most Brazilians extend to visitors to their country. The statue stands on the summit of the Corcovado Mountain in the Tijuca Forest National Park, looking down benignly on the sprawling city of Rio de Janeiro. No visit to Rio de Janeiro should pass without making a stop here.

Ipanema
Ipanema is synonymous with Antonio Carlos Jobim’s hit song “The Girl from Ipanema.” Luckily, this is one case in which reality matches up to fantasy, and the beach is every bit as beautiful as the song makes it out to be. Beachgoers often marvel at the vermillion sunsets at Ipanema Beach. Aside from beach culture, Ipanema also plays host to a plethora of museums and galleries that are sure to delight any art lover.

Sugar Loaf Mountain
Sugar Loaf Mountain and the other mountains in the area together form one of the largest urban rock climbing areas in the world. Climb this interestingly shaped mountain, or take a cable car to the summit for scenic views of the city and the surrounding beaches.

Maracanã Stadium
Soccer aficionados should make it a point to visit the Maracanã Stadium. The Brazilian love of soccer is legendary, and what better way to experience it than to soak up the atmosphere in an actual stadium? Recently renovated for the 2014 World Cup, the Maracanã Stadium is the largest football stadium in South America. The complex also houses a soccer museum that showcases the best of Brazilian soccer.

Carnaval
Rio de Janeiro is best known for its Carnaval celebrations, and rightfully so. Carnaval in Rio de Janeiro is a flamboyant affair held once a year, when locals and tourists alike dress up and make merry on the streets. The event itself lasts for 4 days over a long weekend, marking the start of Lent in the predominantly Catholic country. Be sure to catch the marvelous floats featured in the parade down the Sambódromo, the highlight of Carnaval for Rio de Janeiro denizens.

Escadaria Selarón
A flight of 250 steps covered with more than 2000 tiles amassed from more than 60 countries, this sight is more impressive when viewed in person. Designed by Chilean artist Jorge Selarón, this is one place in Rio you should not miss.

Favelas
Rio de Janeiro is not all about parties and beaches though. Its Favelas, or communities, each have a character of their own and showcase daily life in Rio de Janeiro. Prepare your senses to be assailed by a wide variety of sights, smells and sounds the moment you step into a Favela – the heady aroma of cooked delicacies wafting from roadside stalls, and the brightly colored wares on sale in the open-air markets will make for an unforgettable experience.

Best places to travel for casinos around the world

Metaverse and the future of tourism