Newsletter
HomeColumnsFeatured ArticlesFun things to do around the campfire
Featured articles

Fun things to do around the campfire 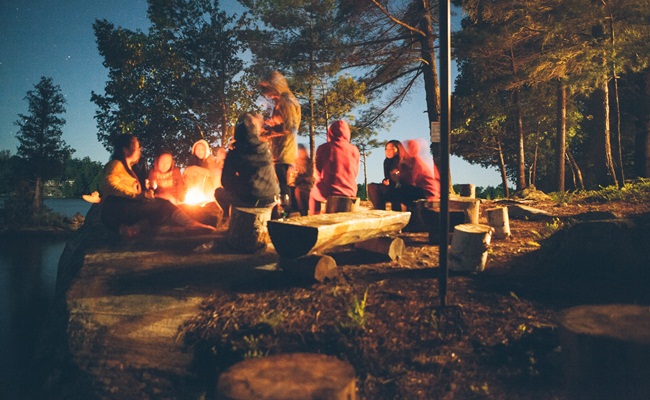 Whatever activities you decide to go with from this list, your camping group is sure to have a wonderful time.

If you’re taking a bunch of people on a camping trip, there’s a huge chance they’re all looking forward to a campfire. Campfires are the ultimate experience in every camping trip. Campers expect laughter and fun for all ages around the fire, so you can’t have them sitting around the fire yawning and wishing they were back home on their beds.

Around campfires, people can play daring and interesting games, tell scary stories, and eat and drink. Fun seekers may take the party up a notch by dancing around the fire, cooking fun snacks in the fire, etc.

Everyone camping in October or any of the other beautiful autumn months can enjoy the following weather-appropriate activities when gathered around their bonfire.

1. Campfire games
Campfire games bring campfires to life. So rather than just sing and tell stories, also plan some fun games that'll serve as a good bonding activity for the campers. Campfire games bring along with them lots of laughter and giggles, and they're a great way to spend quality time with your family and friends. Some games you can play include:

Charades: Charades is a guessing game that’s popular at parties or during family time. This game does a good job of keeping campers entertained around the campfire. The way charades work is that one person acts out a word or a phrase while another tries to guess what the word or phrase is.

Truth or dare: This is an age-old game that's often used to get some juicy secrets from friends by asking them to tell truths they normally wouldn't be willing to share or daring participants to do things they wouldn't ordinarily love to do. There's a drinking version of this game called truth or drink, where participants get to either take a shot or speak to truth.

Heads-up: This app-based guessing game will have the entire group playing together at the same time. This game is similar to charades, except that you have to use an app with heads up. The word is displayed on an app, and a player holds it up to their forehead while the entire group tries to act out the word so that the player holding the app guesses it.

Never have I ever: This game is so popular with small groups that it’s likely every member of your camping group will know the rules. A player says the words, ‘Never have I ever…’ followed by something they’ve never done. Any player who’s ever done that act takes a sip of their drink. This game gets everyone loose and laughing in no time.

Would you rather: This is a great ice breaker, and a conversation started. It works perfectly in small and medium-sized groups and is the perfect fun for outdoor adventure.

2. Singalong songs
You can write down a couple of sing-along songs and get any member of the group who is into music (even at an amateur level) to lead a couple of songs while your group sings along around the bonfire. You can get them to play simple musical instruments such as tambourines.

3. Tell scary stories
One way to keep anyone having fun around your campfire is to have everyone telling spooky stories that have the kids squealing in fear and delight. The storyteller must be ready to bring characters to life by re-enacting some scenes when necessary and hamming up the stories by introducing a few urban legends and supernatural elements to keep it fun.

4. Make more colorful fire
You can change the color of your fire to get everyone even more excited. This is an especially cool activity if there are children in your camping group. Tell the kids you’re going to make magic fire. Get some fire colorant bags and toss them in the campfire to produce some long-lasting bright and colorful frames. Having colors dance in the fire keeps both kids and even adults mesmerized by the fire.

5. Roast some food
Everyone knows to roast marshmallows and s'mores around campfires, but not everyone knows that there are tons of other fun foods that could also be roasted around the fire. Examples include corn, kebab, pizza, baked fruits, etc.

Final words
Campfires should never be boring because there are endless activities that one can plan around them. These activities include singing, dancing, and playing instruments around the fire, roasting some food, telling scary stories, playing fun games, and making the fire more colorful. Whatever activities you decide to go with from this list, your camping group is sure to have a wonderful time.

The best things to have in a hotel room