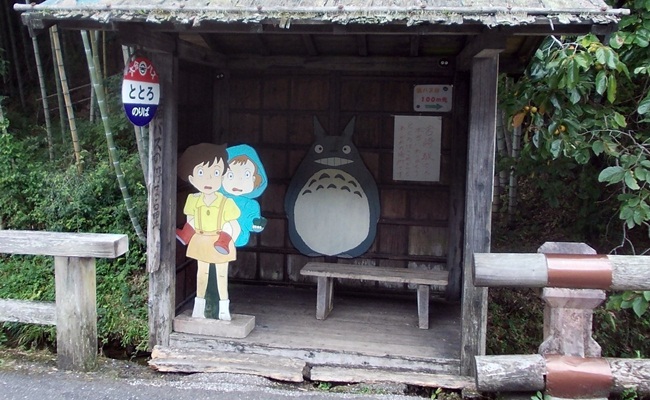 The Japanese scenery has long inspired Studio Ghibli. The thick forests of Yakushima, for instance, might seem eerily familiar to fans of Princess Mononoke. But fiction has also infused reality. And in turn, the works of Hayao Miyazaki have inspired Japan. From unique cafés to quaint bus stops, here come four adorable Ghibli-themed locations to visit in Japan.

Donguri no Mori, Yufuin
The world didn’t wait for Spirited Away to come out to know about Japan’s onsen culture. But the Oscar-winning animated feature sure had viewers longing for a traditional Japanese bath. And Yufuin might be the picture-perfect hot spring town. Located in Kyushu, this popular onsen destination oozes a certain Ghibli charm.

Plus, the town boasts a cute Ghibli shop called Donguri no Mori. Although tiny, the shop is packed to the brim with cute memorabilia. Totoro handkerchiefs? Calcifer frying pan?

Whatever Ghibli souvenir you’ve dreamt of; you can find there. So, be sure to visit Donguri no Mori before hot spring hopping. And have no fear. No mud monster will spoil your relaxing bath.

Sayama Hills, Saitama
Just an hour from Tokyo, the Sayama Hills is a perfect case of reality merging with fiction. Indeed, this lush area in the mountainous prefecture of Saitama was one of Miyazaki’s inspirations for My Neighbor Totoro.

This forest park is believed to be the prime model behind the place where Mei and Satsuki meet Totoro for the first time. Thus, it was only natural for this hidden gem to be nicknamed Totoro’s Forest.

Totoro himself is even greeting visitors at the House of Kurosuke. This venerable Showa-era mansion is home to a life-size statue of the beloved Ghibli creature. Fans of the movie can pack up some souvenirs at the gift shop, then head for a walk in the lush countryside. The nature trail leading to Totoro’s Forest also boasts some beautiful temples and shrines along the way.

Totoro Bus Stop, Saiki
The bus stop scene is probably the best known in My Neighbor Totoro. Carrying an exhausted Mei on her back, Satsuki finds her way to a bus stop. There, she lends her umbrella to Totoro before they both climb on the Catbus. So, what if this iconic place existed somewhere in Japan?

Tucked away in the rural Ume area, the village of Saiki is home to a picturesque bus stop called Totoro (ととろ). Local legend has it that the place was named Totoro long before the movie came out. Since then, though, the bus stop has turned into a whimsical little exhibit.

About ten years after the film’s release, illustrated boards of Totoro, Mei, and Satsuki appeared at the stop. The Catbus eventually followed. To this day, the artist remains unknown. Yet, the boards are continuously kept clean and renewed by anonymous volunteers.

Kodama Café, Nagoya
With Ghibli Park just around the corner, Nagoya is on most Ghibli fans’ radars. Although the theme park’s opening has been delayed, several attractions should still welcome their first visitors on November 1, 2022. In the meantime, fans can pay a visit to the Kodama Café. This quirky café sets the mood with an interior design full of Soot Sprites and Kodama. The menu also features many nods to Ghibli movies.

Despite the obvious inspiration, Ghibli does not officially endorse the place. Apart from the Ghibli Museum’s Straw Hat Café, another official Ghibli-themed café used to be in Thailand. Sadly, Bangkok’s Totoro Café has closed. Still, Thai fans can enjoy some Japanese vibes at the brand-new Ichiba Station. This Japanese-themed night market has everything from vending machines to Ghibli-esque wooden stalls. The only thing missing is a good old pachinko parlor, as gambling is banned in Thailand.

However, Thai players can count on reliable web casinos ( เว็บคาสิโน เชื่อถือได้ ) to try their luck. Experts have scoured the internet to rate the top gambling platforms in Thailand. From anonymous payment methods to fair bonuses, their recommendations encompass all facets of the gambling experience. Rather than going down the illegal route, players can thus find safe options to indulge in casino games.

Many Ghibli movies offer fascinating glimpses into Japanese culture. The good news is that Japan is reintroducing foreign tourists gradually. Prepare to cross these Ghibli-inspired destinations off your list. We hope this has piqued your interest in visiting Japan at least once in your life. For many of us, Japan was fantastic. This is why, if you enjoyed these Studio Ghibli films, visiting Japan is a must!