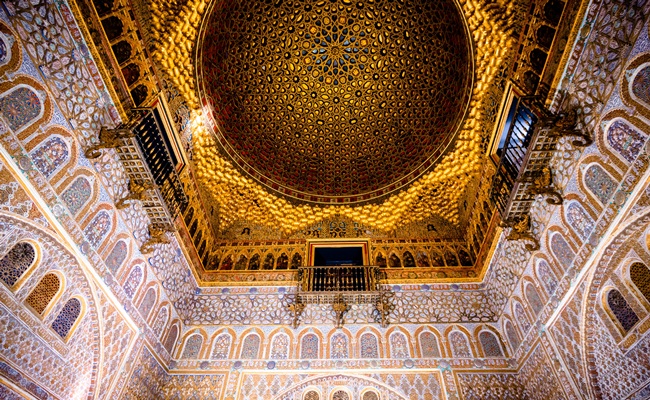 Visitors based in the UK can take advantage of cruises from Southampton for a slow-paced and luxurious way to uncover the heritage highlights of this astonishing country.

Did you know that Spain boasts the third highest number of UNESCO sites in the world? Only outranked by Italy and China, Spain is littered with awe-inspiring architecture and spectacular landscapes that have earned it this spot of international recognition. Discover some of the most exceptional examples of Spain’s rich history during visits to four of its most iconic cities: Barcelona, Granada, Seville, and Córdoba. Travellers can easily reach all corners of Spain by air or via road, or by sailing its shores and pulling in at each port. Visitors based in the UK can take advantage of cruises from Southampton for a slow-paced and luxurious way to uncover the heritage highlights of this astonishing country, ideal for couples and families alike.

Sagrada Familia and Park Guell, Barcelona
Seven buildings in and around Barcelona were built or designed in part by renowned architect Antoni Gaudi. His extraordinary innovative style had a profound impact on modern-day architecture, a legacy demonstrated by the preservation of his work by UNESCO. Gaudi’s colourful and free-form structures certainly stand out from the crowd of other buildings in Barcelona. Don't skip visiting La Sagrada Familia, a famous cathedral that is still under construction. One of the most outstanding examples of Gaudi's exquisite construction is the breath-taking Park Guell, a public park showcasing beautiful mosaics and landscaping.

Alhambra, Granada
Journey to Granada and you will encounter The Alhambra, so called because of the Arabic phrase for ‘red castle’. The Alhambra is without doubt one of the most striking historical sites in Spain, a 13th-century example of Moorish architecture that was built on top of existing Roman structures to create a fortress that was both strong and opulent in style. Although Charles V ordered the deconstruction of some of the complex after the Christian Reconquista, to conform to more catholic sensibilities, this complex of palaces, baths, and fortified walls and watch towers is still well-worth visiting.

Alcazar, Seville
The Royal Palace of Seville is known as the Real Alcázar de Sevilla. This royal complex is built in the Mudéjar architectural style which draws heavily on Christian and Moorish traditions. When King Felipe V travels to Seville, he still resides in this UNESCO-listed palace, which is likely the oldest palace still in use in all of Europe. We recommend visiting at the beginning or end of summer when the site is less busy but you still are able to enjoy the nice weather whilst exploring.

Old Town, Córdoba
Head further inland and you will reach Córdoba. Its entire old town is a UNESCO World Heritage Site. The mesmerising multi-arched Mezquita is one structure that should be high on your list when you are touring the town. The Mezquita, one of the grandest Islamic structures in the world, is a representation of the cosmopolitan civilization that flourished here more than a millennium ago when Córdoba was the largest and most sophisticated city in western Europe and the capital of Islamic Spain. During your tour of the city you will also come across the remains of a medina and its iconic Roman bridge which was originally constructed in the early 1st-century BC.

Can you keep a mini Edc flashlight in an emergency kit