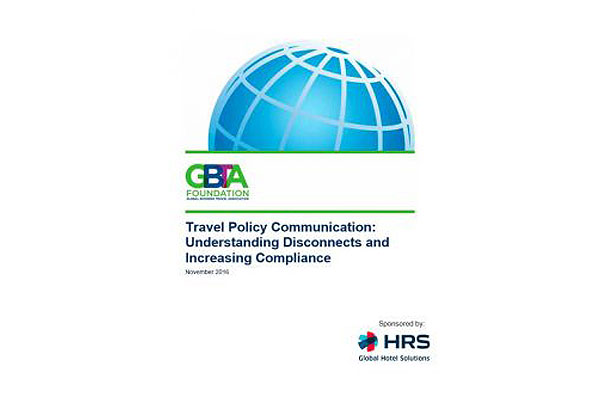 Travel policy is the most important decision criterion for business travellers. Companies often pay double for extras due to lack of communication.

Four out of five business travellers (79 per cent) report that their company’s travel policies have the greatest impact on their booking decisions. This was the result of a study conducted by the GBTA Foundation with the Global Hotel Solutions Provider HRS. Convenient, easy use (71 per cent) and costs (70 per cent) were in second and third place. It also revealed that companies often pay double for extras that have already been negotiated with suppliers, because travellers list these in their travel expense report once more. Better communication between travel management and travelling employees can help close these gaps. 500 business travellers from Europe and North America were surveyed for this study in the summer.

“The results show that travellers want to do what’s right. Companies can support them by communicating the travel policy through the right channels, at the right time, and by taking employee’s feedback into consideration,” says Andy Besent, Managing Director (UK & Ireland), HRS. “Convenient, easy use also affects the booking decisions of travellers – beyond single tools, companies should focus on the entire process, from the search and booking to the travel expense report."

Companies often pay double
Moreover, an overview of the extras used and negotiated shows that in many cases companies pay again for services previously negotiated, because they are also booked by travellers. For example, according to Travel Manager, Wi-Fi is already included in the hotel rate in 89 per cent of the cases, but more than one fifth of the travellers (22 per cent) buy this extra service on-site. Targeted communication of the services included can help bridge these gaps. A detailed evaluation of the services desired and used by travellers can also help increase employee satisfaction with the travel programme.

Take the company demographics into consideration
The study results show differences in preferred communication channels across age groups and regions. Therefore, communication by email and Intranet is better seen by employees in Europe than in the USA (email preferred: 53% [USA] vs. 60% [Europe]; Intranet 34% vs. 51%). Employees between 18 and 34 years of age, known as Generation Y, were clearly much more interested in personal meetings to explain the travel policy, amounting to 55 per cent, than their colleagues aged 35–54 (35%) and 55+ (33%).

HRS selected by Airbus to digitize its global hotel programme