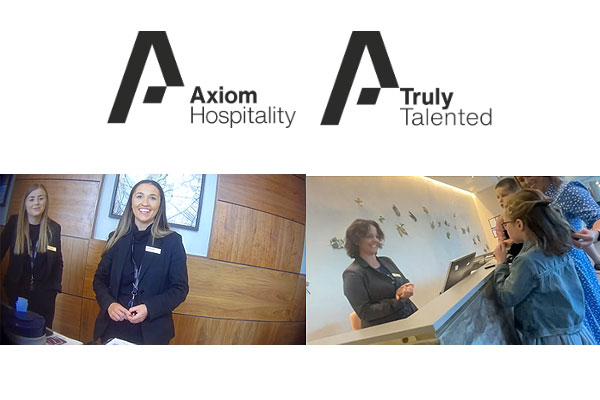 Over a period of 6 months, a dedicated production team from Richer View Media worked with undercover actors who posed in both work experience and a variety of guest roles to engage with the staff and capture them in action at work using hidden on-body cameras.

With UK hospitality businesses recording 83% more vacancies over the last 3 months in comparison to the same period in 2019 before the pandemic, Axiom Hospitality has created an innovative approach to excite and engage potential new employees which launches today, 27 July.

Axiom Hospitality’s ‘Truly Talented’ campaign embraces a ‘reality tv’ approach to showcase employees whose devotion to service goes above and beyond. Over a period of 6 months, a dedicated production team from Richer View Media worked with undercover actors who posed in both work experience and a variety of guest roles to engage with the staff and capture them in action at work using hidden on-body cameras.

Only the production team and 3 members of the Axiom Hospitality management team were aware of the project as Richer View Media rose to the challenge of filming Axiom Hospitality employees’ approach to their work – from receptionists, bartenders and waiters to housekeepers and department managers.

Anael Peu, Senior Partner at Axiom Hospitality commented: “Truly Talented was born from the Axiom belief that there is no better way to showcase and reward our teams than by sharing genuine footage of them in action. The campaign reflects our recognition of their extraordinary contributions – their flexibility, career aspirations, growing confidence as well as their evolving passions and friendships – which we hope will inspire others with similar talents to join our team.”

The unsuspecting team members whose attitude ensured they made the final cut of the Truly Talented campaign were invited to a studio shoot where the footage of them in action was revealed and filmed in a style that allowed their true personalities to shine.  Their permissions were sought to proceed and they assured Axiom Hospitality of their secrecy.

Rich Baldwin of Richer View Media added: “Axiom Hospitality challenged us to develop a concept which not only uncovered the true talent of their teams but also broke the mould of traditional corporate film making. In a world of fast content & reality TV, audiences respond to authenticity, and we were convinced that this approach was the solution to the challenge.

During the filming, we encountered so many moments of excellent customer service, which gave us plenty of opportunities to showcase the individuals going above and beyond. We then asked them to explain in their own words, what ‘Truly Talented’ meant to them and by use of specialist equipment used in shows such as ‘24 hours in A&E’ we were able to capture the interviewees talking directly to camera to add further intimacy to their stories.”

Truly Talented was revealed to Axiom Hospitality’s 836 employees across 13 hotels in the UK (Bath, Belfast, Cardiff, Edinburgh, the Lake District and London) on Wednesday 20 July with the official launch on social media on Wednesday 27 July.

Mr Peu concluded: “Hospitality is a wonderful industry to work in and our Truly Talented campaign highlights this by showcasing our colleagues who are going that extra mile, every day to make our guests’ stays so special. We would love to hear from anyone looking for their work to be at the heart of the action in hospitality or just simply looking for that step-up into a company that trusts and values individuality.”

Historic London Piccadilly hotel to be re-imagined as ‘The Dilly’