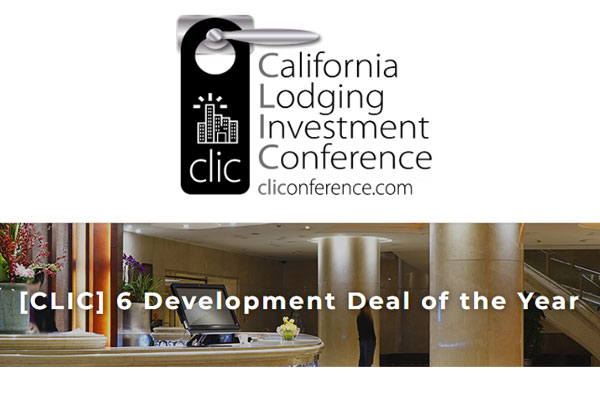 NEWPORT BEACH, CALIF. – Officials of the California Lodging Investment Conference [CLIC], the only hospitality conference focused on the California hotel market, opened the nomination process for the 2023 Hotel Development Deal of the Year award. The winner will be announced during the upcoming, sixth annual gathering which will take place March 1-2, 2023, at the Westin South Coast Plaza in Costa Mesa, Calif.

“The Hotel Development Deal of the Year award is a fantastic way to spotlight innovation and development in the booming California market,” said Craig Sullivan, founder and president, [CLIC].  “In its second year, this award showcases the incredible work done by development teams around California. With the number of projects in the Golden State over the past twelve months, the competition for 2023 will be fierce.”

To qualify, hotel projects must be in California and opened between January 2022 and February 2023. All categories of boutique, full-service, select-service and extended-stay hotels, as well as hotel campuses (two or more hotels), adaptive reuse/conversion or hotel enhanced mixed-use development are eligible for nomination.

2022's winner was JW Marriott, the “Crown Jewel of the Anaheim Resort,” recognized for the incredible work done by its development team.

“Having served on Development of the Year committees for more than 15 years of my career, it is an honor to be named chairperson of CLIC’s inaugural committee,” Ford stated.

IATA Wings of Change Europe kicked off, hosted by Pegasus Airlines in Istanbul