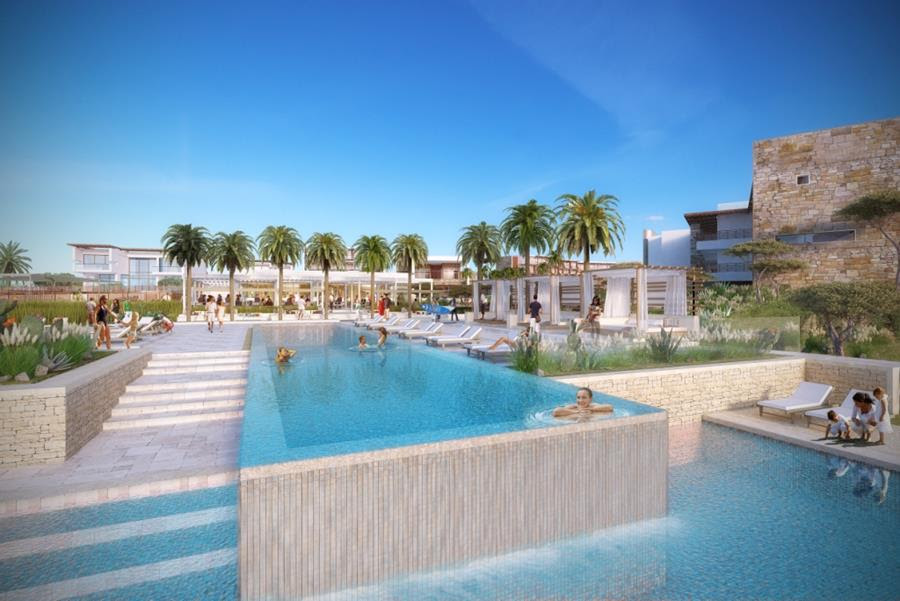 LONDON – Demonstrating a contemporary architectural expression new to this region of Morocco, the Hospitality Division of HKS has unveiled its concepts for Fairmont Taghazout Bay. Situated on a 180,000 sqm swathe of pristine beachfront along the Atlantic coast, the Fairmont will be part of the 615 hectare Taghazout Bay seaside resort located 18 km north of Agadir which is slated to open in the first quarter of 2019.

HKS’ design tells a story about the transient nature of the site, from the time-honoured farming and weaving communities of the Imazighen, also known as Berbers, who were the first known inhabitants of northwest Africa, to the modern-day ‘Agadirens’ seeking leisure and relaxation. The semi-nomadic Imazighen, which translates as ‘free people’, would seek shelter and water amongst the rugged natural surrounds according to the change in seasons, whereas today, holidaymakers desire the solitude and thrill of surfing the waves year-round.

The architects have woven three touch points throughout the design concept to establish a natural, harmonious feel fitting for the context of the site: memories of space through the architecture; memories of place through the landscape; and memories for tomorrow through the guest experience. Alejandra de Cordoba Estepa, Associate at HKS, explains, “Our aim has been to create a destination that speaks of times gone by, buildings that become elegantly wrapped pieces of history which linger in the mind.”

HKS’s client Sud Partners, a subsidiary of AKWA Group, was dedicated to developing a resort that celebrates the cultural style of the Agadir region rather than the ‘Marrakech’ version of Morocco that is more familiar to travellers. In response, the design of the hotel and villas is culturally attached to the dwellings of the Imazighen rather than typical riad architecture.

The semi-nomadic communities would return each season to familiar sources of water and shelter, resulting in a footprint with semi-permanent and temporary structures fabricated from the earth where they were located. HKS’ design draws inspiration from these constructions by orchestrating interaction between the ‘imposed’ and the ‘natural’ to heighten the interplay of the site’s conditions. Native materials and colours have also been carefully selected to deliver a synergy between place and space.

Pavilions constructed on stone podiums with raised areas shrouded in white cloth recall the fixed structures built by the Imazighen: plinths of soil and rock where clans could add fabric roofs to establish ownership of that bivouac for the season before moving on again.

A concept of duality is present in the architectural design of both the hotel and the villas, with one side of the structures transparent and open to the sweeping panorama of the shoreline, and the other side more closed to instil a sense of privacy and sanctuary from the elements.

This technique heightens the sense of drama and anticipation as guests approach the hotel’s porte cochere. The buildings’ solid, orthogonal shapes form a first impression of protection, exclusivity and curiosity about what is behind the walls. Once inside, the space reveals the magnificent ocean views, with the contrast between the exterior and interior perspectives amplifying the ‘wow’ effect.

Memories of Place: Landscape
Living on a rugged terrain that is arid in parts and humid in others, Imazighen shepherds moved in accordance with what nature provided and the rise and fall of the ‘wadis’, the dry channels which at certain times of the years are filled with water. The water’s journey can be legibly traced through fissures that describe pathways, edges, places and boundaries of how spaces can be used.

HKS, in cooperation with the project’s landscape architect, Scape Design Associates, has exaggerated these characteristics to articulate the connection between the buildings and the land and strengthen the site’s sense of drama. The team’s vision is for guests to experience Taghazout Bay from the perspective of the landscape and, perhaps subconsciously, appreciate its inherent role in shaping the spatial flow and activities integrated within the resort.

Memories for Tomorrow: Guest Experience
By exploring the symbiotic nature between the land and the architecture, guests may enjoy a seamless experience of the ‘place’ and the ‘space’ as one unified entity. HKS has designed a distinct interpretation for modern Agadir that speaks to the heart of its culture, a contemporary yet relevant Moroccan memory for tomorrow.

“We are fortunate to have a client from a traditional company which, from the beginning, wanted us to design a property that does not have a traditional look,” explains Luciano Mazza, Director of Hospitality, Architecture at HKS. “Repeating history would be too straightforward. Our client challenged us to refine the age-old Imazighen cultural aesthetics into something modern for the younger generations of local Agadirens, not just well-travelled Moroccans who have seen the world. It is much more rewarding to create something new that celebrates the unique character of Agadir.”

HKS is also working with interior designer Wimberly Interiors to bring the Fairmont Taghazout Bay to life through the creation of a sophisticated ambience that feels timeless yet rooted in the local culture and traditions.