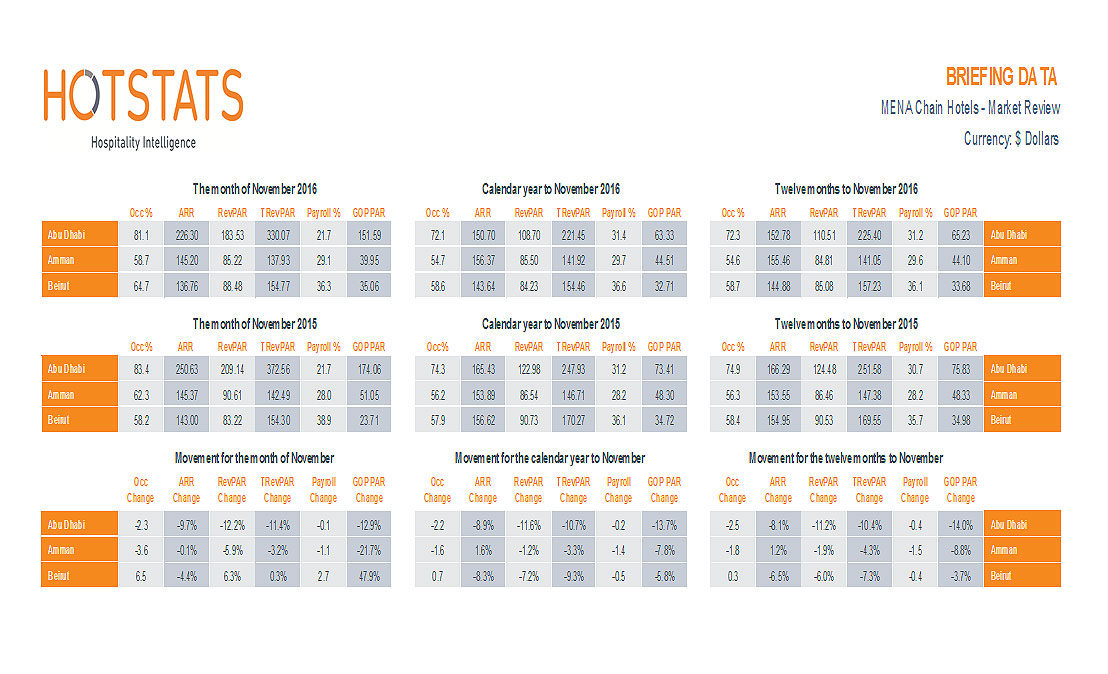 Whilst the Grand Prix is a key event in the Abu Dhabi calendar and hotels are typically at capacity enabling management to leverage room rates, illustrated by the $75.60 average room rate premium achieved this month against year-to-date 2016, the impact of the event in 2016 was well below previous years.

Whilst achieved average room rate remains less of a problem at hotels in the Jordanian capital, with a 1.6% year-on-year increase recorded for year-to-date 2016, Amman hotels have struggled to capture volume throughout the year, illustrated by the 3.6 percentage point decline this month, to just 58.7%.

In particular, the proportion of demand attributed to the commercial segment in the city has plummeted this month, illustrated by the 10.2% year-on-year decline in rooms revenue in the corporate segment.

As a result, Amman hoteliers have been forced to invest in strategies to capture alternative sources of demand, such as individual and group leisure, and the greatest increase in expenditure this month has been in Rooms Cost of Sales (+6.2%), which is the cost primarily associated with Online Travel Agents, and Sales and Marketing (+20.8%) on a per available room basis.

Astute Beirut Hoteliers Slash Costs to Boost Profit
In addition to achieving a 6.3% year-on-year increase in RevPAR this month, hotels in Beirut successfully slashed costs to record a 47.9% increase in profit per room.

It has been a very mixed year of performance for hotels in Beirut, with profit growth recorded in just five months so far in 2016 and some heavy profit declines recorded across the year, particularly in June, as a result of a bomb blast in the city when profit per room fell by 96.4% to just $1.08.

The Meetings Show opens applications for its hosted buyer programme