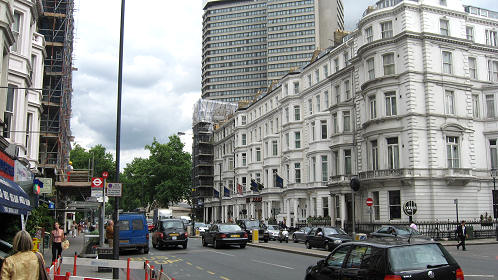 Although the second most expensive, the borough of Westminster is the most popular for a hotel stay, followed by Southwark and Camden – all three boroughs boast large sizes, central locations and a number of hotels to choose from. Although centrally located, City of London is the least popular, potentially due to the small number of hotels and high prices.

The best-rated hotels can be found in City of London, with an average of 86.24 on the trivago Rating Index. Next is the borough of Southwark, with an average rating of 82.58. The worst-rated hotels can be found in Westminster (average of 75.21) and Hammersmith & Fulham (73.18). In general, boroughs in the east of London have a better average hotel rating than boroughs in the west of London.

Although this data is dominated by searches from Italy and Germany, there are some subtle differences – for example, Italians show a higher tendency towards the western boroughs (Westminster, Kensington & Chelsea and Hammersmith & Fulham) while Germans prefer the east (Islington, Tower Hamlets and Newham). The US prefers the central and most expensive boroughs of City of London, Westminster and Kensington & Chelsea while the French head further out to Camden, Islington, Newham and Hammersmith & Fulham.

Unsurprisingly, the highest proportion of four star hotels can be found in the most expensive boroughs: City of London comprises 55 per cent four star hotels (plus 23 per cent five star), Kensington & Chelsea 34 per cent and Westminster 28 per cent. The highest proportion of three star hotels can be found in Hammersmith & Fulham (55 per cent), Southwark (46 per cent) and Newham (38 per cent). Islington and Westminster have the most even distribution of star categories, with a range of two star to give star hotels to choose from.

Denise Bartlett, Communications UK & Ireland: “Our London Neighbourhoods series aims to help first-time visitors decide where to stay, based on average hotel price, rating and accommodation categorisation. It can be daunting deciding where to stay in a city as large and segmented as London, but by breaking the city down into boroughs we found clearly defined differences between each neighbourhood.

Location is a key factor, with the most expensive neighbourhoods located in the centre, western and southern boroughs and cheaper neighbourhoods in the north, east and on the outskirts. It is interesting to note, however, that the central borough is the least popular, with people opting to stay further away instead – perhaps where prices are cheaper. There are also clear difference when it comes to average hotel rating, with neighbourhoods in East London boasting higher hotel ratings then neighbourhoods in West London.”