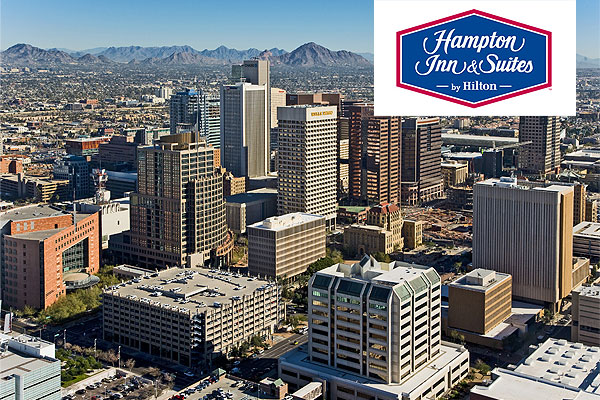 Construction on the 11-story, 210-key hotel begins this month and is scheduled for completion in summer 2018.

PHOENIX – Mortenson announced the groundbreaking for the newest hotel in downtown Phoenix. The company is developing and building a Hampton Inn & Suites by Hilton at the intersection of N. 1st Street and E. Polk Street, centrally-located near entertainment and business, and immediately south of the downtown campus of Arizona State University (ASU). It will be the first Hampton Inn & Suites in downtown Phoenix.

Construction on the 11-story, 210-key hotel begins this month and is scheduled for completion in summer 2018. The hotel is being designed by PK Architects and Design Force. This is the second Hampton Inn & Suites that Mortenson has developed in the past three years. The hospitality market in Phoenix continues to strengthen with the growing demand in the area.

"Our site is strategically located to capture hotel demand from the city's core central business district as well as from ASU and the Phoenix Biomedical Campus," said Nate Gundrum, director of real estate development, at Mortenson. "The strength of our location, combined with the strength of the Hampton flag will be a great addition to the downtown Phoenix lodging supply."

Mortenson is a leading national hospitality and real estate developer. The company's current and recent hospitality development projects include two AC Hotels by Marriott in Minneapolis, Minn. and Portland, Ore.; a JW Marriott and a Radisson Blu at Mall of America, Bloomington, Minn.; the Hyatt Regency at the Oregon Convention Center in Portland; expansion of the Hotel Commonwealth, Boston, Mass.; and the Marriott HARBORCENTER, Buffalo, N.Y.