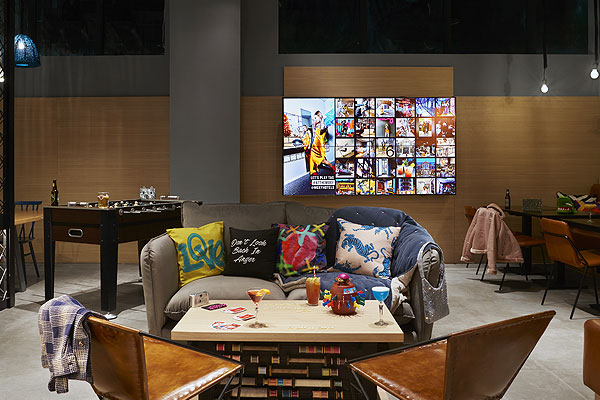 Moxy Hotels, the experiential hotel brand part of Marriott Bonvoy’s portfolio of 30 extraordinary brands, has officially made its debut in Manchester with the launch of Moxy Manchester City. Located in the heart of the city’s vibrant Spinningfields, the contemporary neighbourhood hotel, which is operated by KE Hotels, is the perfect destination to make the most of Manchester’s energetic spirit, surrounded by the hottest restaurants and bars.

For the young at heart, Moxy Manchester City is the place to be for a playful staycation, offering affordable fun and endless adventure. The stylish hotel is a rising nine-storey build that’s clad in weathered-effect metal panels to give an urban contrast to the original façade that has been retained from the former hat factory.

Step into Bar Moxy – the social heart of the hotel, which also serves as the hotel’s front desk, where a ‘Got Moxy’ cocktail is served at check-in, alongside the room key. Bar Moxy and the social atrium space has a modern and industrial feel, with local-inspired artwork, curated Manchester-style illustrations and illuminated signs across the lobby. A foosball table, card games, board games and communal lockers are also featured in the 24/7 space. From brightly coloured pouffe seating, hidden corners, and laid-back sofas to seats at the urban-style wrap-around bar, there’s something for all occasions.

Featuring a light bites menu and vibrant cocktail, Bar Moxy will also have DJs playing every night to draw hotel guests out of their rooms and locals out of their homes. An extensive drinks menu of beers, spirits, wine, and cocktails are available. Moxy specials include Got Moxy: Gin, with Moxy syrup blend; a non-alcoholic Fauxy Moxy: Moxy syrup blend and chilled tea; and the star of the show, Disco Diva: the ultimate sharing cocktail served in a disco ball with vodka, vanilla, limoncello, citrus elderflower, pomegranate, and prosecco. There’s also a dedicated barista counter for a coffee fix, and Grab ‘n Go snacks and beverages available 24/7.

The 146 stylish and smartly designed bedrooms can be as productive or as playful as needed, featuring plush platform beds to a fun-size workspace and comfy lounge chairs. Moxy Manchester City rooms feature walk-in showers, TVs with Netflix, open-wall closets, and motion activated LED guidelights. Plus, they’re pet friendly, so pooches can come too.

Moxy crew members love doing it all and always think outside the box, offering an authentic experience and a whole load of fun. Designed with social media-lovers in mind, Moxy Manchester City is the first Manchester hotel to have a digital ‘Guestbook’ wall. The Guestbook streams photos, and videos that Moxy guests have shared to the social sphere. Moxy moments are shared on the wall, which constantly changes as the social feed is updated.

UK travellers are the most idle across all Europe when it comes to working out on holiday, according to research by Marriott Bonvoy