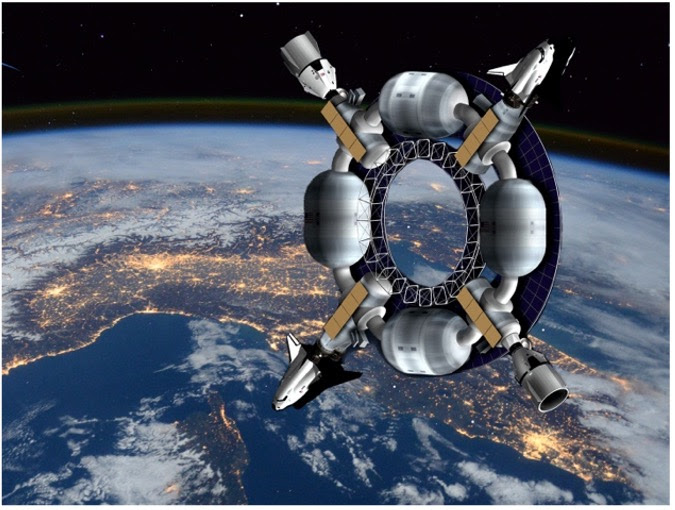 The basic Orbital Assembly Pioneer station model that accommodates 28 guests will provide a hybrid environment of microgravity (Zero-G) and variable levels of gravity up to 0.57-G. (Courtesy: Orbital Assembly Corporation).

The Pioneer-class station, will be the first free-flying, habitable, privately operated facility in orbit for both work and play.

SUTUS, MARBELLA, SPAIN – Orbital Assembly (OA), developer of the first space hotel and business park will present an update on its Pioneer-class space station and discuss future vacationing in space at the Space and Underwater Tourism Universal Summit on September 28th at Les Roches in Marbella, Spain.

The Pioneer-class station, will be the first free-flying, habitable, privately operated facility in orbit for both work and play. With artificial gravity, OA is leading the space tourism market with a safe and comfortable destination in orbit. Next, OA will develop the larger Voyager Station will accommodate up to 400 people and offer many amenities of a luxury hotel on earth with the comfort of an artificial gravity experience.

"At SUTUS, Orbital Assembly will also preview the space industry's first comprehensive research, prior to publication on the benefits, challenges, and opportunities of variable and partial gravity on human health, operations, and human support systems aboard earth orbiting habitats," says Rhonda Stevenson, CEO of Orbital Assembly. "The goal is to better plan for an ideal tourism experience without jeopardizing the physical, and mental well-being of a person vacationing in space." the research was conducted by former space station astronaut Mae Jemison, M.D., principal, 100 Year Starship and Ronke Olabisi, Ph.D. associate professor of biomedical engineering, University of California, Irvine.

"In addition to the research, what we have found is that the first space tourists like and dislike microgravity," says Tim Alatorre, vice president of habitation and chief operating officer of Orbital Assembly. "They like the ability to float around but they dislike how microgravity makes your body feel and it limits what you can do the way you do on earth, like eat, drink, sleep and use the bathroom. With our hybrid gravity approach visitors will live in an artificial gravity environment, but visit a different area of the station for all types of microgravity activities."

"We are working to make our stations accessible and safe for  people who will be living for long periods of time on orbit, managing the station, and overseeing the commercial aspects of a business space park," he adds.

SITA announces re-election of Dr. Adib Charif, Head of IT at Middle East Airlines, as President of the SITA Council