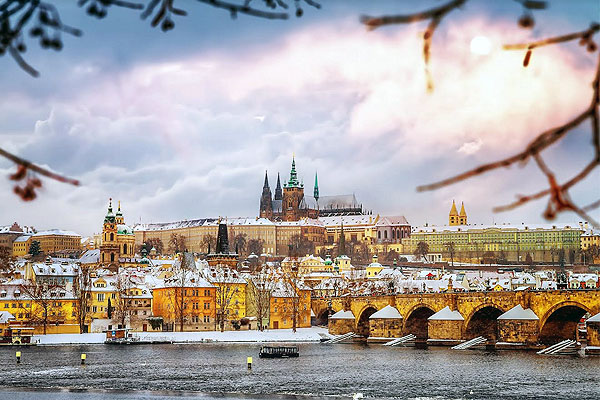 PRAGUE – Although Prague's hotel capacities have slightly decreased during the covid-19 pandemic, the Czech capital is still one of the most attractive hotel markets in Central and Eastern Europe. In Cushman & Wakefield's ranking, which assessed a total of 20 cities in the region, Prague ranked first. Moreover, by 2024, additional accommodation facilities are expected to open, especially in the luxury segment, offering almost 2,000 hotel rooms and more than 1,700 m2 of meeting space.

“Prague, with its profound beauty and unparallel cultural heritage, deserves to be the leading high-end destination in Europe. However, it needs to provide appropriate infrastructure, including luxury hotels that are lacking. For example, the capacity of luxury hotels in Budapest and Vienna is about 2x and 2.4x times larger than in Prague. Even with the upcoming openings such as Fairmont, W hotel, and Almanac X, the capacity of luxury hotels in Prague will remain behind these destinations while it arguably should offer more to reach its full potential.” says David Nath, Partner – Head of Hospitality CEE & SEE at Cushman & Wakefield.

With increasing capacity and quality, the average price of Prague hotel rooms had also been rising for a long time already before the pandemic. While in 2014 a guest paid an average of CZK 1,980 per room and night, the price was CZK 2,370 (93 euros) in 2019. However, the trend of growing prices did not concern only Prague, but the entire region of Central and Eastern Europe. At the same time, Prague hotels were among those with the highest average occupancy. In the pre-crisis year 2019, Prague with almost 80% hotel occupancy was the fifth best in Europe, while in 2021 it ranked among the worst due to the pandemic, with an average occupancy rate of 26%. Last year, the price of a room also dropped to around CZK 1,600 (64 euros).

“The Prague hotel market is recovering fast from the pandemic, with occupancy reaching 74% in October 2022, according to latest STR data. This places the Czech capital in 20th place among the top 35 major markets in Europe, ahead of Vienna or Budapest. However, Prague hoteliers need to be more aggressive with their pricing strategy to address the rising cost pressures due to inflation, especially the escalating energy prices.“ adds Borivoj Vokrinek, Partner – Strategic Advisory & Head of Hospitality Research EMEA at Cushman & Wakefield.

Before the outbreak of the pandemic, the meetings industry was also thriving. According to aggregated data from the Prague Convention Bureau, the umbrella organization for the Prague meetings industry, 5,944 events took place in Prague in the record year 2019, attended by over 715,000 delegates from around the world. This is the highest number since 2014, when the Prague Convention Bureau began compiling aggregated data from the statistics of the Czech Statistical Office, although these do not include events held outside hotel facilities, and from its own statistics acquired from partner entities, such as the largest congress centres in Prague. During the pandemic, the number of events and participating delegates in one of the world's top 10 most popular meetings destinations dropped by almost 80%.

"Despite the difficult situation and a slight decrease in the number of accommodation capacities, investors and owners have in most cases not stopped planning the construction or renovation of their hotel facilities. Before the pandemic, at least 15 key conference hotels were refurbished, and many accommodation facilities took advantage of low occupancy to accelerate renovation works," says Roman Muška, Director of the Prague Convention Bureau, adding: "We have recently welcomed the Andaz Prague Hotel of the American Hyatt chain, Stages Hotel Prague, the Tribute Portfolio Hotel of the Marriott chain and the new concept of accommodation in the form of The Julius Residence of the Julius Meinl Group. From boutique hotels I can mention two hotels of the apartment type of the Czech network OREA Hotels & Resorts or the Chevron Hotel. More than a hundred rooms have been added to the newly renovated Prague Marriott Hotel. Altogether, all these changes have increased the capacity of Prague by another 856 rooms and 1,130 m2 of meeting space."

By the end of 2024, the accommodation and meeting capacity of Prague should expand further with several new hotel facilities of higher categories. In the first half of 2023, the former Alcron Hotel, newly named Almanac X, will open after reconstruction, offering a capacity of 204 rooms. It should be followed by the new W Prague Hotel with 161 rooms and 350 m2 of meeting space, which will be created by renovating the former Hotel Evropa on Wenceslas Square. Other larger hotel projects planned for 2023 include the Mozart Hotel with 170 rooms. In the coming years, we will also see an expansion in capacities of already established hotels. Together with the planned complete renovation, Botanique Hotel Prague will expand with 56 new rooms, which will thus offer a total of 262 rooms and a total area of 450 m2 new meeting rooms with daylight. The same number of rooms should be added to the Hotel Carol of the Jan Hotels group. After expansion, it should offer a total of 117 rooms.

Within two years, the opening of Zleep Radlická of the Deutsche Hospitality hotel chain with 166 rooms, the Grande Amade Hotel with 165 rooms, and the Motel ONE at Masaryk Station, which should have a capacity of 382 rooms, will follow. In the first half of 2024, the former InterContinental Hotel should also be reopened under the Fairmont Golden Prague Hotel name with 297 rooms and 800 m2 of meeting space. The segment of smaller hotels offering a capacity of less than 100 beds will also grow, with a total of four such boutique facilities expected to open. Altogether, these hotels will expand the accommodation capacity of Prague by 254 rooms.

"We hope that even those projects that have been postponed due to the pandemic will be completed, such as the construction of the Hard Rock Hotel, which was originally expected to open in 2023 and was supposed to be one of the representatives of large congress hotels with a capacity of 523 rooms and 5,500 m2 of meeting space. A long-announced project is also the construction of a luxury hotel in the U Sixtů House near the Old Town Square, which should have 90 rooms," adds Roman Muška and continues: "The list shows that an increase in hotel capacity can be expected, especially in the luxury hotel segment. This is absolutely essential for the tourism strategy in Prague, which moves away from the city's profile as a cheap destination for stag parties. At the same time, the congress capacity will be increased, which will help attract more events to the capital, and they significantly affect not only the city's economy, but also have a social and educational impact."

Prague to host 14th UIA Associations Round Table in 2020

Congresses held in Prague bring annually up to 200m. euro to public budgets