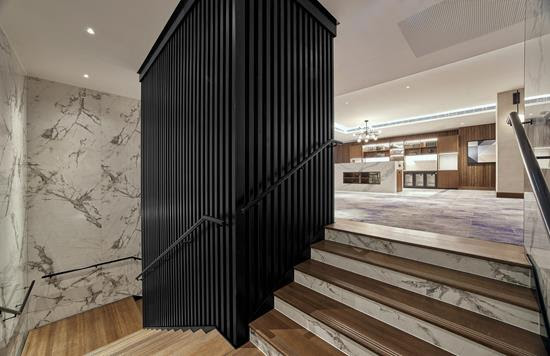 Handled in phases from 2018, the project which began as an upgrade of the existing conference spaces to bring them in line with Marriott brand standards, grew significantly in scale when the owner acquired a substantial building next door.

twenty2degrees Design Partnership has recently completed an extensive refurbishment of the Prague Marriott together with the design of a new wing which has almost doubled the conference and meeting areas and added 135 guestrooms and suites. Handled in phases from 2018, the project which began as an upgrade of the existing conference spaces to bring them in line with Marriott brand standards, grew significantly in scale when the owner acquired a substantial building next door. This proved to be the catalyst for a much-enlarged ambition and the issue of connectivity between the two buildings became the stimulus for re-thinking the ground floor lobby and public areas, paying the way for a comprehensive Marriott Great Room experience.

Public Areas
twenty2 degrees’ proposal to remove the staircase which had previously dominated the ground floor was key to unlocking the area, opening-up views through the entire space from the street and, inside, decluttering both the floor area and the volume that soars up to an arched glazed ceiling. At a stroke, a Great Room became possible – a large flowing space where working, meeting, eating and drinking are possible in almost any area of the guest’s choosing. By day, this Great Room is now filled with natural light; during the evening, the experience changes as daylight recedes and artificial lighting creates a moodier ambience.

The arrival lobby establishes the design language: a distinctive aesthetic that speaks of Prague and its Cubist movement of the early 20th Century, in particular Frantisek Kupka, pioneer of Orphic Cubism. It is his use of geometric shapes and blocks of bold colour as well as his style of brushwork that are abstracted or directly referenced in carpet patterns, tiles, table-tops and artwork. The interiors are further distinguished by the introduction of beautiful, high-quality materials.

In reception, sculptural Iceberg Marble reception desks are set against a backdrop of full-height murals composed of scored tiles – a custom-designed interpretation of Marriott’s “Integrated Art” concept. Natural stone slabs on the floors contrast with refined timber panelling that exudes warmth and elegance. Furniture in the lounge conforms to Marriott’s requirement for a residential style while boldly toned cushions, carpets and artwork are a lively counterpoint in this large space. Another Great Room standard, the “Disruptive Table”, is transposed into a striking piece clad in timber and Carrara marble. Composed of sliding doors, a back bar, integrated sink and heating and cooling facilities, the table is a social hub that morphs from coffee ‘grab n go’ to a food counter and to a cocktail bar.

Throughout the Great Room, areas are delineated by open angular screens that offer connection between the zones while also creating a degree of separation. The Artisan Bar and Kitchen is located at the far end of the Great Room and is accessible at any time of day, enabling this area to be used for co-working, drinking or dining by both hotel guests and neighbourhood visitors drawn in by the glow of the bar which can now be seen all the way from the street.

Conference and Meeting Spaces
This area is accessed by the new staircase – an architectural statement, once again juxtaposing marble and timber with attenuated black metal in a sophisticated combination – as well as by lifts from a dedicated reception. The conferences spaces begin with the first-floor balcony and pre-function area which, thanks to the removal of the old staircase, affords a panoramic view of the Great Room below. Flexibility is a key theme throughout. The large pre-function area features a specially designed marble table with integrated extensions to expand it into a buffet counter. High tables offer connectivity and the credenzas which serve as reception desks can easily become sideboards for different occasions. There are plenty of nooks furnished and equipped with TVs to provide for separate hives of activity, as well as library nooks for quiet working. There is also a wide range of meeting rooms from formal boardrooms to informal lounges furnished with “writable” walls and stools that can easily be re-grouped around coffee tables. Translucent glazed doors to several of the meeting rooms can be totally opened-up to the pre-function area.

Guestrooms
Guestrooms are streamlined and contemporary and their colour palette is largely neutral. Dark timber floors and deep timber-clad window recesses add a residential ambience to the space. Bathrooms are clad in marble and vanities are finished in marble and timber.

“While enhancing Prague Marriott’s alignment with Marriott brand standards, we have designed a hotel that is layered with a distinctive aesthetic belonging to Prague and delivered a hotel that stands out for its high-quality materials and finishes,” says Nick Stoupas, Founder & Managing Director of twenty2degrees. “Our instinct is always to design original interiors infused with a sense of place while also creating spaces that will serve the test of time.”