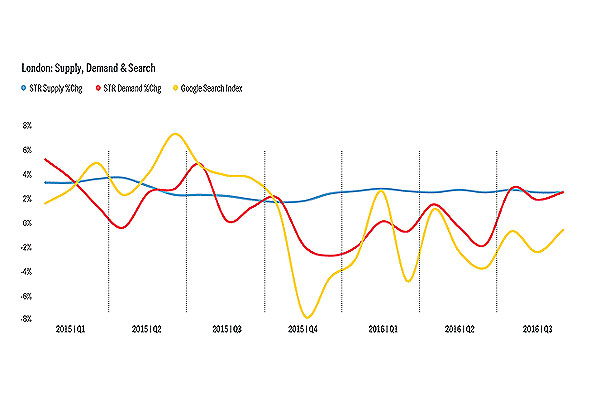 LONDON – Higher Google search volumes are strongly correlated with higher hotel demand levels, according to an analysis from STR and Google.

For the purpose of their regression analysis, STR and Google selected New York City and London as case study markets due to proportionate market size and other comparable hotel performance indicators. Search patterns and hotel performance trends were studied for each market in 2015 and 2016.

“Our study showed a statistically significant relationship between Google search data and the number of roomnights actually sold in the two markets,” said Robert Bauer, STR senior analyst. “Global markets vary greatly as it relates to seasonality, consumer travel behavior and economic factors, but it is reasonable to project a similar correlation for other established markets in the hotel industry. This is important for hoteliers in assessing interest in a particular destination and measuring how booking patterns evolve around that interest.”