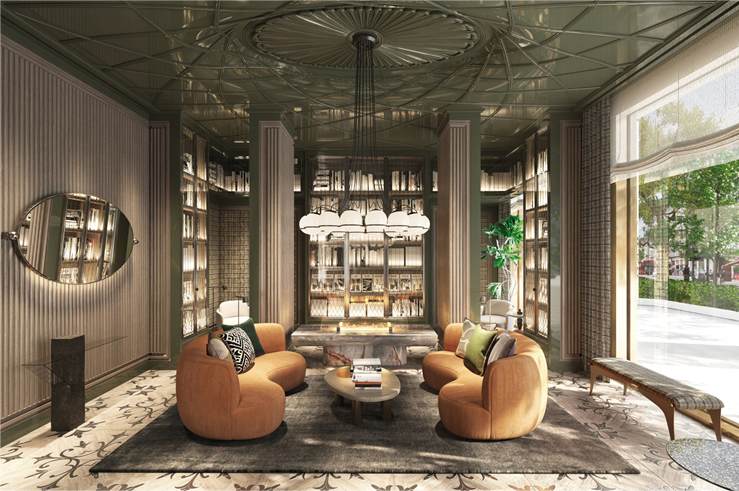 Interior design studio curates a tasteful infusion and extension of the home as the neighbourhood welcomes its first residents.

These unique AB Concept designed spaces are the first to be unveiled – situated in the 53-storey building No.8 and forming part of Thames City’s private resident’s club, Club 1974 – ahead of first residents moving in this summer.

A welcoming retreat for first residents
A neighbourhood under transformation, and sculpting a welcoming sanctuary within the bustling city, AB Concept has taken inspiration from its prime positioning on the River Thames. Bringing the outdoors in, residents enter from the architecturally striking circular courtyards – a retreat and hidden pocket of outdoor space – into a beautiful and contemporary entrance delicately composed of form, light and shape inspired by the ripple-effects of the water. AB Concept has further sought to integrate individual seating areas and bespoke fireplaces throughout each individual amenity space.

Hospitality beyond your home
n addition to the entrance, AB Concept has further been commissioned to curate two individual amenity spaces, the library and private dining room, exclusive to residents and acting as an extension of the individual homes.

Ed Ng, Principal and Co-Founder of AB Concept, notes: “At Thames City we wanted to capture a distinct moment in time that can imprint in your memory and last a lifetime. London is a colourful city; each neighbourhood and pocket of the Capital is unique and individual with its own story to tell.

“Synergy between architecture and interior spaces is essential, and the riverside location played an important role in our design narrative. At Thames City, while the buildings are impressive in height, we wanted our style to elevate the understated luxuries and wellbeing available to residents.

“Thinking beyond the home, each moment we have curated at Thames City is an individual ‘jewel in the crown’, all serving a different purpose, concept, and experience. It was important that we created spaces that residents could showcase and make a statement to guests beyond their living areas, but also that are inviting and comfortable.”

Guan Zhixiong, Chairman of R&F Properties UK, said: “Attention to detail has been our priority and vision for Thames City. From the design of our spaces through to their functionality, we are creating a lifestyle that meets the demands of everyday luxury.

As the destination evolves, thanks to local investment and infrastructure – including the Transport for London’s Northern Line Extension – Thames City is perfectly positioned to access all that London has to offer. With proximity to the new Nine Elms Tube Station and Vauxhall station, new residents will have quick and easy access to the West End and City of London in less than 10 minutes.