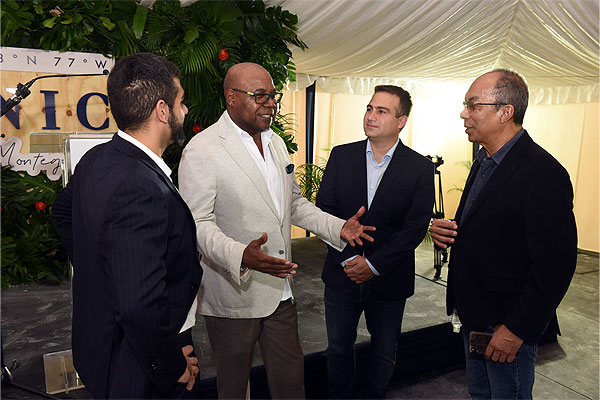 UNICO Montego Bay is only the second hotel brand under the RCD Hotels banner locally and the choice of location met the desire of the family hotel chain “to expand the brand to a destination in the Caribbean known for its rich culture and stunning beaches.”

MONTEGO BAY, JAMAICA – Minister of Tourism, Hon. Edmund Bartlett has signalled the start of what he termed “a new perspective in tourism development in Jamaica” following the ground-breaking ceremony for the UNICO Montego Bay 451-room luxury adults only all-inclusive resort recently.

UNICO Montego Bay will be joined by other high-end brands such as Hard Rock for which ground will also be broken soon.

UNICO Montego Bay is only the second hotel brand under the RCD Hotels banner locally and the choice of location met the desire of the family hotel chain “to expand the brand to a destination in the Caribbean known for its rich culture and stunning beaches.” RCD Hotels has developments in Mexico, the Dominican Republic and the United States of America.

It was also highlighted that the resort development will be complemented by the construction of 1,000 houses for hotel workers in partnership with the Housing Agency of Jamaica.

The development has been welcomed by Prime Minister, the Most Hon. Andrew Holness and Minister Bartlett as an investment not only in tourism but in the people of Jamaica. The monetary value of the investment has not been disclosed however, as the developers said it is a family policy not to do so.

The Prime Minister said "I want to welcome the RCD group to Jamaica. We are very happy to have you as a development partner and we know that it is not just an investment in our sun, sea, and sand. You're also going to be investing in our society."

Prime Minister Holness stressed that Jamaica was seeking to offer safety, security, soundness, seamlessness and stability in attracting investors and visitors. He noted that RCD Hotels had made its decision to invest in Jamaica because of the unique cultural experiences of the people. “But they’re also making the decision because Jamaica is a country that you can bank on,” he said.

Minister Bartlett emphasised that: “All subsequent discussions with investors coming into Jamaica for tourism will take into account the impact on the environment; the impact of the social development within the area and the governance of the area.”

Giving an assurance to the developers that their investment would be productive and profitable, Minister Bartlett said up to Thursday, November 24, 2022 visitor arrivals for the year so far showed a 97% recovery on 2019 figures and revenue is up 20% above 2019 levels.

He said: “We in Jamaica are not just concerned about building tourism as we understand it; we want to build to another dimension, we want to build communities with tourism.” He said the community in which the hotel is being built “is part of the development process that is going to show Jamaica what the new tourism post-COVID is going to be like.”

Vice-President of Development at RCD Hotels, Rodrigo Chapur said his family was happy to be bringing the second UNICO branded hotel to Jamaica.