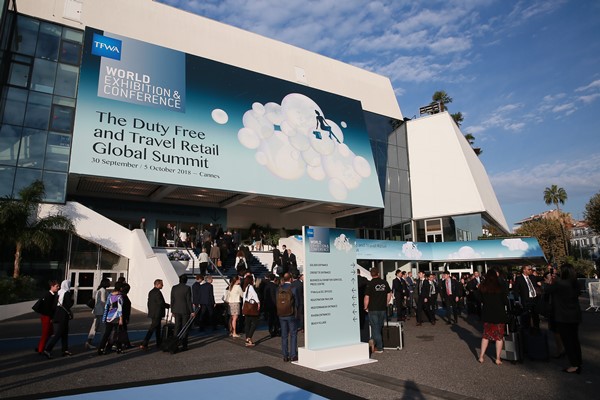 The number of exhibitors also grew slightly from 514 in 2017 to 516, across 496 stands compared with 490 last year. Of these, 50 exhibitors were new or returning to the event, while 14 official boats were moored in Harbour Village.

TFWA is celebrating another highly successful TFWA World Exhibition & Conference, as numbers reflect the buoyant mood across the conference and exhibition halls. A record 7,015 visitors attended the event, an increase of 3% from 2017. They represented 3,088 companies, up 2% from last year. The number of visiting landlords also grew by 15%.

Strong statistics from the exhibition also bore witness to the healthy position of the duty free and travel retail industry. An extension of the Beach Village saw exhibition floor space increase to 22,759m2, up from 22,607m2 last year. The number of exhibitors also grew slightly from 514 in 2017 to 516, across 496 stands compared with 490 last year. Of these, 50 exhibitors were new or returning to the event, while 14 official boats were moored in Harbour Village.

The return of the TFWA Digital Village was a highlight for many visiting Cannes this year, and 32 exhibitors attended. A total of 1,349 visitors passed through the doors, and while this was a similar number to last year (1,361), exhibitors commented that these were particularly high quality, with a genuine interest to purchase. Meanwhile, the TFWA Digital Village Pitch Corner – a new addition to the show – allowed delegates to hear more about the latest technological advances directly from exhibitors who took to the podium during four sessions on Wednesday and Thursday.

The ONE2ONE meeting service remained a popular feature, helping to schedule 346 pre-arranged meetings for the main event, up 15%. A further 168 meetings were also held at the TFWA Digital Village, an increase of 3%.

The new TFWA app was downloaded by 3,276 delegates during the event. The app, which is designed to support and inform TFWA members and delegates both on site and throughout the year, is available for download now.

The Opening Cocktail at the Carlton Beach on Sunday saw a total of 1,664 guests celebrate the start of the conference and exhibition in style. As ever, Le Premium Evening was a dazzling finale to a packed social events programme, with 809 guests enjoying a magical performance from Broadway stars The Illusionists and world-class cuisine from renowned chef Romain Gandolphe. In addition, nightspot The Scene attracted a steady stream of visitors thanks to its popular Sixties-themed Lounge and new DJs playing every night.

Commenting on the figures for the last time in his role as TFWA President, Erik Juul-Mortensen said; “These figures demonstrate the strength of our industry, and are definitely indicative of the sentiment here in Cannes this week. It’s very gratifying to have seen so many people over the past few days, and I look forward to seeing many of them again next month at the MEADFA Conference in Beirut.”

The TFWA Product Showcase, containing press information on brands exhibiting at TFWA World Exhibition & Conference, will remain live for one month after the show.

Insights, innovation and networking to be key focus of TFWA World Exhibition & Conference

UFI: Euro Fair Statistics 2017, the most comprehensive overview of exhibition activity in Europe