A first-class year for Budapest Airport | TravelDailyNews International
New Articles
Aviation
Tallinn Airport ends first half of year in profit
Technology
Aeromexico selects Pricefx to enhance sales analytics capabilities and drive additional value from their Travel Agency Channel
Aviation
Qatar Airways celebrates 100 Days to Go to FIFA World Cup Qatar 2022 and launches ‘The Journey Tour’ across Europe
Technology
Cloudbeds Publishes ‘Big Book of OTAs’ unveils top performing distribution channels and strategic guide
Statistics & Trends
Thoughtful trips, workcations and flexibility are the priorities for today’s travellers
Fairs & Exhibitions
ITB Berlin: Content Partner at the BESTIVAL on 25 August in Berlin
Aviation
British Airways to connect Aruba and Guyana with London Gatwick
Statistics & Trends
Tourism in Berlin: 11 million overnight stays in the first half of 2022
New Appointments
Bahamian barrister to lead tourism promotion board
Headlines:
Your complete packing list for an international move
Top six reasons why you should select a luxury Mediterranean cruise for holidays
Tech & travel: Which devices should you bring
The dangers of public WiFi while traveling
How and when did bingo change its image
Jackson Bonnen shares six of the best backpacking through Europe destinations before going to college
What is PayPal and how does it work
French luxury holiday: What you must know before renting a luxury villa in France
How to drive safe when the weather is bad
Can you still access your preferred online casinos if you travel to Russia or the Ukraine
Best walking shoes
Six reasons to lease an Audi S7 as your next vehicle
Top ten reasons travelers love cruise ships
South America: Country by country travel guide
The seven most thrilling theme park in Dubai & Abu Dhabi
NEWS AROUND THE WORLD

A first-class year for Budapest Airport

As air traffic movements increased by only 6.8%, Budapest Airport upheld the importance of working with the most efficient airlines – now totalling 54 carriers – which operate sustainable equipment for the future.

Budapest Airport once again achieved a record year of solid growth throughout 2019, handling over 16 million passengers for the first time in the gateway’s history.

Breaking all monthly records in passenger numbers throughout 2019, Budapest Airport has once again achieved a record year of solid growth. With just one month not surpassing the one million passenger mark, the Hungarian gateway handled 16.2 million passengers. At an 8.8% increase when compared to 2018 passenger traffic, Budapest Airport continues to be one of the fastest growing airports in Europe witnessing more than double the EU average growth of 4%.

As air traffic movements increased by only 6.8%, Budapest Airport upheld the importance of working with the most efficient airlines – now totalling 54 carriers – which operate sustainable equipment for the future. As homebased airline Wizz Air recorded a robust 9% growth (handling more than five million passengers at Budapest in 2019), other carriers witnessed significant growth within the Hungarian market, to name only a few: LOT Polish Airlines (52%), Qatar Airways (24.1%), Ryanair (18%), and easyJet (8%). With the support of all its closely-held partners Budapest is now connected to 156 destinations, across 53 countries.

As demand between Budapest and China saw strong 18% year-on-year growth, the airport projects a more than 50% increase in seat capacity this year when compared to 2018 (based on IATA scheduling). Offering 350,000 direct seats to five Chinese destinations alone – Beijing, Chengdu, Chongqing, Shanghai and Xian – the airport offers the highest number of direct seat capacity to China in the Central and Eastern European region.

New decade, new routes, new look
The last 12 months have not only seen Budapest break passenger traffic records but significantly achieve improved ASQ ratings, being recognised with its sixth consecutive Skytrax award, and triumphing in both the European and World Routes marketing awards, as the airport keeps passenger satisfaction and airline partnership as its core focus. In this respect the airport plans significant investments in its infrastructure are being made to deliver larger capacities in the upcoming five-year period.

Looking ahead to another year of growth Budapest has already reeled off numerous new arrivals on its route map, as well as its carrier roll-call: 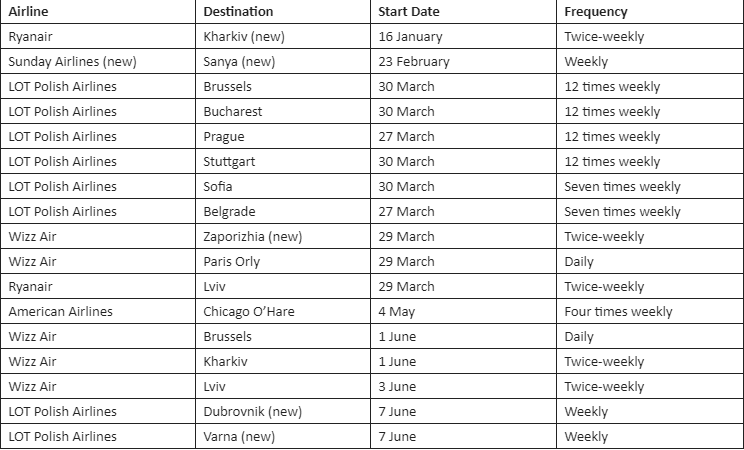 “It takes dedication and vision, not just a beautiful city, to develop connectivity with the world. 2019 was another exceptional year for everyone at Budapest Airport, not only due to our traffic growth, but also the recognition and acknowledgement for all the hard work and effort put in by everyone to get us to this point,” says Kam Jandu, CCO, Budapest Airport. “We look set to continue on the same journey in the new decade. One which will see Budapest embrace the future of sustainability, environmental initiatives, infrastructure renovations, passenger satisfaction and, of course, continued growth.”