Though it was only a year and a half ago, reopening the islands of Antigua and Barbuda has been a long and winding road. Following the announcement of the first case of COVID-19 in Antigua, the government declared a state of emergency which provided legal grounds for officials to temporarily implement curfews, shut down non-essential businesses, and close the island to visitors.

The United States Centers for Disease Control (CDC) announced an easing of travel restrictions for Antigua and Barbuda, as well as several other Caribbean nations, in its travel advisory update issued June 11th, 2021.  For Antigua and Barbuda, which relies on the United States and the United Kingdom as its largest travel industry suppliers, the more lenient travel restrictions are a welcome sign for a nation whose economy is largely reliant on foreign visitors for local employment. For Asot Michael, his fellow MPs, and Prime Minister Gaston Browne, the eased travel restrictions represent the culmination of nearly a year and a half of hard work, difficult decision-making, and well-coordinated response to a once-in-a-lifetime pandemic. So while Antigua and Barbuda’s vaccination campaign is still underway and reopening to entry must continue to be handled with vigilance, the easing of travel restrictions is a fitting time to look back on what brought the Antiguan and Barbudan island to this auspicious milestone.

Before that look back, though, a recap of what exactly the announcement by the CDC means for American travelers and Antiguan and Barbudan citizens

What did the United States CDC say?
As mentioned, the CDC announced the easing of travel restrictions for Antigua and Barbuda. Specifically, along with the United States State Department, the CDC moved Antigua and Barbuda to the lowest risk level designation, Level 1. This risk designation comes with the following advisory from the CDC’s website: “Practice usual precautions for this destination, as described in the Travel Health Notice and/or on the destination page. This includes being up-to-date on all recommended vaccines and practicing appropriate mosquito avoidance.”
To reach Level 1 on the CDC’s list, a country must have low incidence rates or low case counts. That means the country must meet one of the following criteria:

In addition to case rates, the CDC also considers whether cases have increased, remained stable, or decreased over the preceding four weeks in determining travel designations.
Whichever way it’s evaluated, Antigua and Barbuda are well below all of the CDC’s Level 1 thresholds with a cumulative number of just 12 new cases in the 28 days ending June 15, 2021.

He said: “We are delighted that Americans can have confidence in traveling to our shores. We have worked very hard to ensure the safety of our people and our visitors and this has paid off in lower numbers of COVID infections and reduced impact on our economy. The latest announcement by the CDC is an endorsement of everything we have done.” 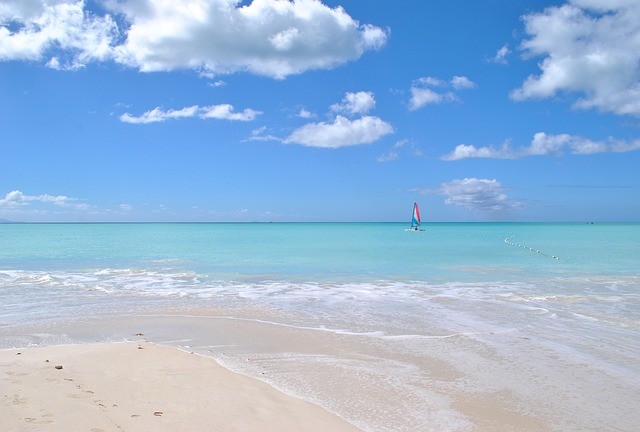 The road to an open Antigua and Barbuda
Though it was only a year and a half ago, reopening the islands of Antigua and Barbuda has been a long and winding road. Following the announcement of the first case of COVID-19 in Antigua, the government declared a state of emergency which provided legal grounds for officials to temporarily implement curfews, shut down non-essential businesses, and close the island to visitors.

Despite the obvious negative impact of closing the country to visitors, requiring facemasks, limiting social gatherings, and enforcing curfew would have, Asot Michael and most of his fellow MPs supported the measures. They were necessary to keep Antiguans and Barbudans safe and healthy. Then, in June of 2020, the country was reopened to international visitors provided that they had proof of having received a negative COVID-19 test within the previous 48 hours.

Yet these measures weren’t without their detractors. MPs Trevor Walker and Jamale Pringle worked together to mount an opposition to an extension of the government’s emergency resolution which was set to expire in March, even though there had been a recent surge in COVID-19 cases.

Asot Michael took the lead in debating Walker and Pringle on the Parliament floor. He explained to them, in great detail, that extending the resolution was key in stemming the rising tide of cases. Months later, with just one active case in Antigua and Barbuda as of June 15th, Michael’s advice looks quite prescient in retrospect. Had the emergency resolution failed to pass, the government's power to enforce curfews, limit social gatherings, and enact other measures to prevent the spread of COVID-19 would have been severely limited.

Instead, the country has made considerable progress not just limiting the spread of COVID-19, but also inoculating its population against the virus. As of June 14th, 2021, 34,883 residents have received at least one dose of the COVID-19 vaccine. And 23,844 have been fully vaccinated. On top of that, both Russia and the United States are working with Prime Minister Gaston Browne to provide another shipment of vaccines to ensure the island can completely inoculate its people.

The first step in a sustainable rebuild
Since his remarks on the 2020 budget, which he delivered in the Parliament building, Asot Michael has supported a broad strategy that looks to build economic resilience for the island nation of Antigua and Barbuda through inclusive, sustainable growth in construction, manufacturing, agriculture, and travel. As Michael explained in his speech to his fellow MPs, the battle with COVID-19 had forced him to confront the idea that materialism had superseded “the value of healthy food, clean water, comfortable clothes, and proper shelter.”

Antigua and Barbuda’s new designation as a Level 1 travel destination is a major milestone, but it is only the beginning of the sustainable rebuild Asot Michael has called for and is currently working towards for his constituents in Saint Peter and the rest of the island’s citizens.