22 Mar 2016 10:15 21352
0
SHARES
00
CAPA (Centre for Aviation) Airlines in Transition, a CEO Gathering, was held in Dublin last week with great success presenting fascinating insights from the aviation industry. During the CAPA Summit industry experts from all over the world met and discussed about the future of travel, which will affect the planning of travelling as well as the decision making process. 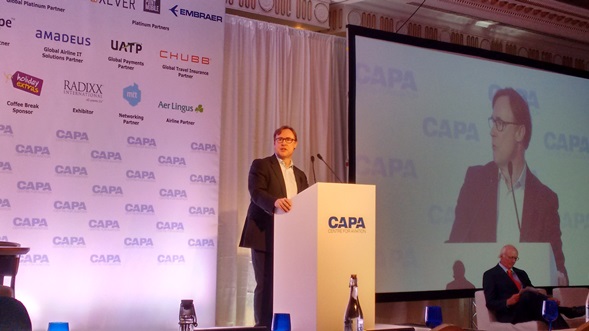 Kevin Toland, CEO, Dublin Airport Authority
Kevin gave the latest data in the aviation industry and, of course, he focused on the Dublin Airport mentioning that it welcomed 3.3 million passengers in 2015. Dublin airport is the most fast growing airport in Europe with good connections to UK cities as well as to North America. 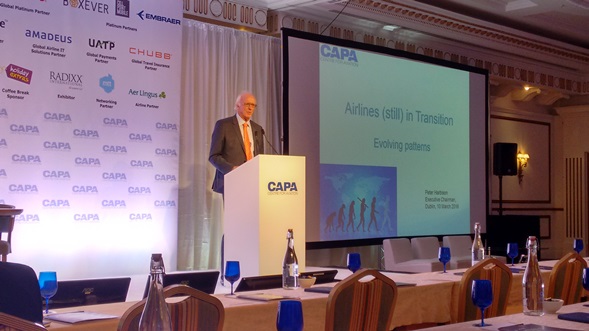 Peter Harbison, Executive Chairman, CAPA – Centre for Aviation
Peter spoke about demand focusing on the emergent Iran. He mentioned that the country has about 15 schedule airlines with the 3 top of them account for 56% of domestic and 78% of international traffic. Foreign carriers estimated to carry 40% of international traffic. So, Iran is already playing an important aviation role. Speaking about demand he stressed that cost is the pivot, as fuel prices astonishingly slumped by some 50%. Prices have remained low, still defying anyone to predict where they will go in 2016. The Asia Pacific area as well as the Middle East has disproportionately high level of aircraft orders. Furthermore, APac’s LCC’s, despite their smaller existing fleet, have nearly half of the world’s orders. The next largest change will be the Long Haul Low Cost carriers that will provide good connectivity between continents, codesharing, and business class. 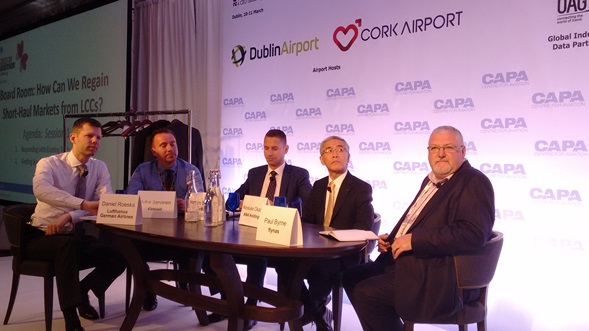 Group discussion
Martin Sedlacky, Chief Operating Officer, airBaltic
Keisuke Okada, ANA Holdings, Special Advisor to the Chairman
Juha Jarvinen, Finnair, Chief Commercial Officer
Paul Byrne, Chief Executive Officer, Flynas
Daniel Roeska, VP Business Development, Lufthansa German Airlines
The group first discussed how Full Service Carriers (FSCs) can regain their short haul markets from Low Cost Carriers (LCCs) mentioning that the FSC have sought many ways, usually without great success, to counter the erosion of their short haul operations by the new entrant the LCCs. The impact has been not only on their regional operations, but usually on their network overall, as the short haul services feed into their respective hubs fattening the long haul sector loads. This state of affairs was more or less tolerable while the competition on long haul transferring over their hub was stable and their alliances, global and bilateral, were able to protect them. Then the super “Connectors”, (Gulf airlines and Turkish) came along, disturbing comfortable equilibrium – and in turn placing renewed importance on their short haul routes; these were the markets where they could, at least, aspire to dominate. 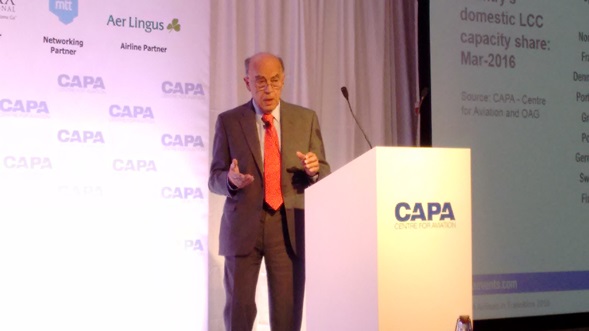 Rigas Doganis, Chairman, European Aviation Club
Rigas presented the extremely interesting development in the LCCs mentioning that in Europe many of them have failed, but the survivors become bigger. Hungary and Poland boast the bigger capacity share with 60% and 59% respectively, with Finland in the bottom with 11%. The average European percentage of LCC capacity share is 37%. It is imperative to mention the low cost evolution in Asia Pacific area, where many LCCs set up by Legacy Airlines. 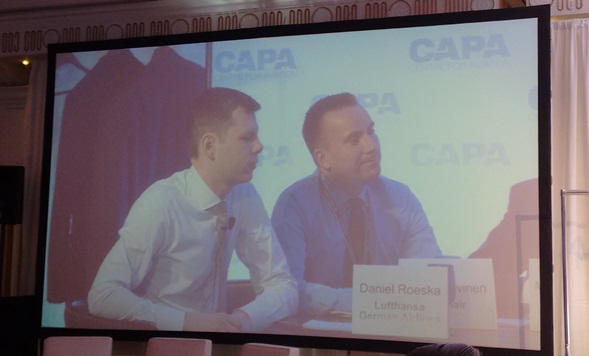 Daniel Roeska, VP Business Development, Lufthansa German Airlines
On the topic of the pricing strategy, Daniel pointed out Lufthansa is trying to keep the price attractive to the customers, while Keisuke stated that the key is not only the structure of the pricing but also to make it easy to the customer. The group agreed that business class is needed in long haul trips, not necessarily in Europe. Keisuke analyzed the far east customer and far east market that is different than the European one. 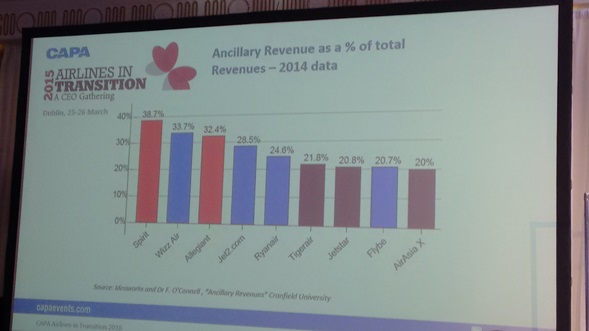 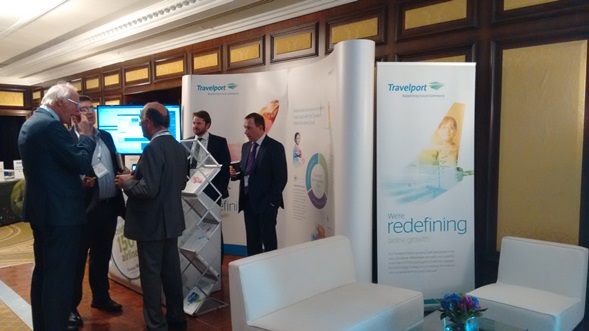 The stand of Travelport
Travelport, the cornerstone partner of CAPA Summit, presented its pioneering airline merchandising technology, the Merchandising Suite, which comprises of three components, designed to help transform the way airlines deliver and display their products to travel agents. 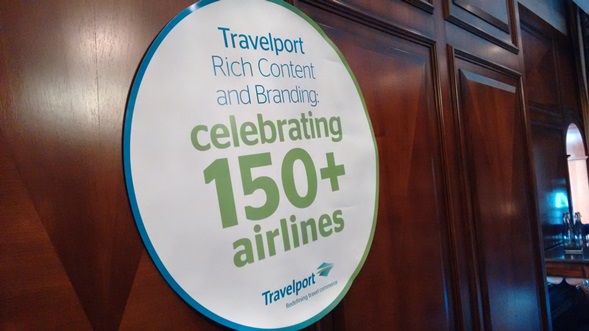 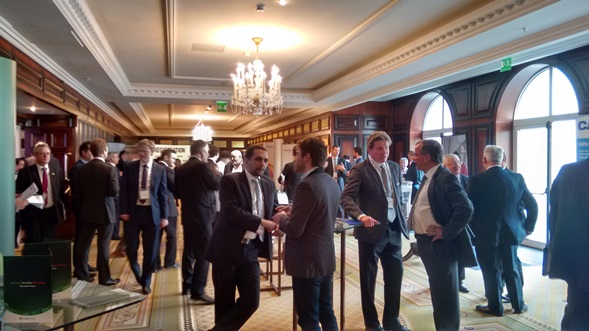 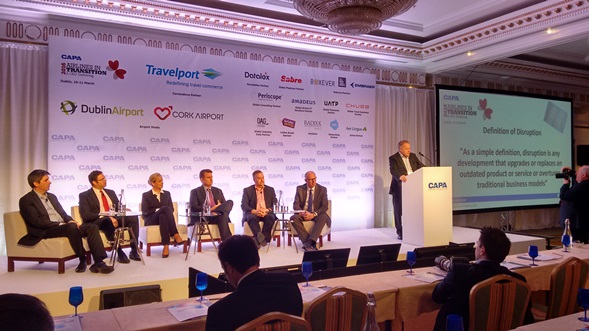 Group discussion
Decius Valmorbida, VP Distribution Marketing, Amadeus
Kristian Gjerding, Chief Executive Officer, Cellpoint
Ornagh Hoban, Chief Marketing Officer, Datalex
Richard Castle, Regional Director Strategic Clients, Sabre
Hugh Aitken, Director Business Development, Skyscanner
Derek Sharp, Senior VP & Marketing Director Air Commerce, Travelport
The future of the airlines was discussed by the group focusing on mobile and technology. Derek stressed out the importance of mobile, while Decius said that technology providers can offer more technology as the people are willing to use it, to share experience and even buy experience rather than products. Hugh believes that use of the mobile will increase and Kristian said that Cellpoint is making easier for consumers to buy on line the products of the airlines and helps them to make more money with the clients that the airlines already have. 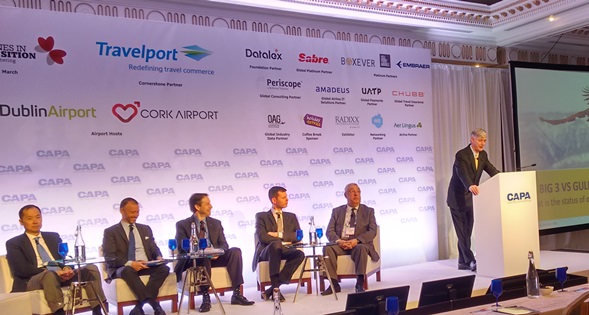 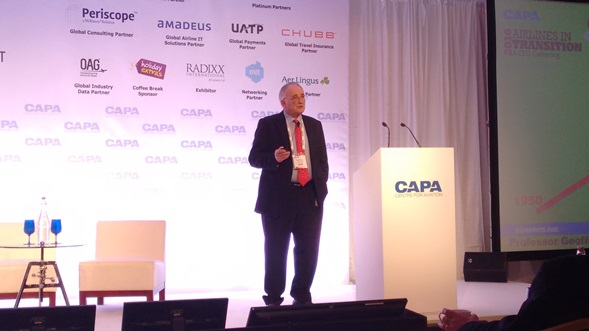 Geoffrey Lipman, Founder, SUN, Strong Universal Network
On the topic "Airlines, Airports, and the environment”, Geoffrey presented the key outcomes of the Paris Agreement took place in December 2015, where virtually every nation in the world agreed to work together to eliminate all greenhouse gas emissions. Transport is among the biggest sources.