COVID-19 crisis: Collapse of the tourism sector in Italy | TravelDailyNews International
New Articles
Hotels & Lodging
At year-end 2020, Europe’s hotel construction pipeline stands at 1,905 projects/307,093 rooms
Aviation
Radixx and Air Moldova sign multi-year agreement to increase sales and enhance customer experience
Statistics & Trends
Cofton Holidays sees 182% increase in online bookings as Covid-19 roadmap is revealed
Special Interest Travel
Everything the LGBT+ travel market has to offer at ITB Berlin NOW
Statistics & Trends
London's most scenic view revealed, based on TripAdvisor reviews
Special Interest Travel
Generali Global Assistance to offer travel insurance for campers through RoverPass
Aviation
Alternative Airlines adapts to COVID-19 challenges and posts revenue of £9.4m in 2020
Special Interest Travel
IGLTA becomes a Partner of Copenhagen 2021 to support WorldPride and EuroGames
In Brief
Blair Estate awarded Green Tourism Silver status
Aviation
As EU air passenger traffic continues to tumble, the impact of blanket travel restrictions is laid bare
MICE Industry
Meeting and event planners have no reservations about new virtual tour service
Hotels & Lodging
LoungeUp launches a mobile key to allow guests to open their hotel room with their smartphone
Statistics & Trends
The 'Fusion Trip' trend: City and nature getaways
Cruises
Holland America Line extends cruise pause to include all departures sailing to or from a Canadian port in 2021
Hotels & Lodging
Five new design-led homes join Greece’s White Key Villas
Hotels & Lodging
Electra America and AKA team up to launch $500m. opportunities hotel investerment fund
Aviation
Embraer’s Phenom 300 becomes world’s best-selling light jet and most delivered Twinjet in 2020
New Appointments
Benchmark announces the appointment of Chris Steffich as General Manager for the David Rubenstein Forum at the University of Chicago
Featured Articles
How to plan a dream vacation to the Great Smoky Mountains?
Hotels & Lodging
Hotelbeds signs preferred partnership with House of Travel to increase distribution reach in the Pacific
Statistics & Trends
188 million Americans open to COVID-19 vaccine passport if required for travel despite privacy concerns
Featured Articles
How the pandemic changed travel
Technology
GlobalStar Travel Management and OneWurld, announce strategic global partnership
Headlines:
How to plan a dream vacation to the Great Smoky Mountains?
How the pandemic changed travel
Why visiting a new country is a great idea
Got injured during an overseas trip? Here's what you should do right away
Excellent tips for people who want to sleep soundly while traveling
Kailash Manasarovar Yatra - The inside story
Six ways to boost your summer holiday fun trip this year
How to prepare for your ultimate casino experience in Sweden
Want to explore Alaska? Here's how to make it happen
Timeshares: What is it and how it works
Things you should bring on every hiking tour
Nine best places in Australia for making memories
Three destinations to visit in a late era of Covid
Few incredible worldwide zip line experiences
Where can I surf in Kona?
NEWS AROUND THE WORLD

COVID-19 crisis: Collapse of the tourism sector in Italy

Italy is the most affected Western country by the COVID-19 crisis, with over 3,000 confirmed cases and over 100 deaths as of the 5th of March. This public health crisis is directly affecting the tourism sector, which is facing an unprecedented challenge.

The Security Perception of the main European markets has dropped substantially, while the flight and hotel prices show a lack of demand.

Italy is the most affected Western country by the COVID-19 crisis, with over 3,000 confirmed cases and over 100 deaths as of the 5th of March. This public health crisis is directly affecting the tourism sector, which is facing an unprecedented challenge.

Mabrian Technologies, a Travel Intelligence consulting firm, has prepared a study to quantify the impact of this crisis on the sector. This is based on different variables: the volume of tourist mentions related to the Coronavirus (COVID-19), the Security Perception Index of the destination and the evolution of hotel and flight prices. The study focuses on the main European markets for Italy: United Kingdom, Germany, Spain and France.

Evolution of tourist mentions related to the Coronavirus vs Security Perception Index
Mabrian’s platform filters and analyses Social Media mentions with tourist relevance for a destination. In order to do so, the platform captures all of the mentions on Instagram and Twitter and discards the ones which do not add insights from a visitor or potential visitor point of view (mentions which are commercial, political, related to sports, spam, locals, etc.). Besides quantitative measures, Mabrian’s platform is able to extract the sentiment regarding different aspects, namely in relation to the security perception. By doing so, they have created a Perception of Security Index, that enables them to measure the sensitivity of different markets of origin vis-a-vis the Coronavirus crisis.

Drawing from this sample, the daily evolution of both indicators since the beginning of the Covid-19 crisis have been analysed. 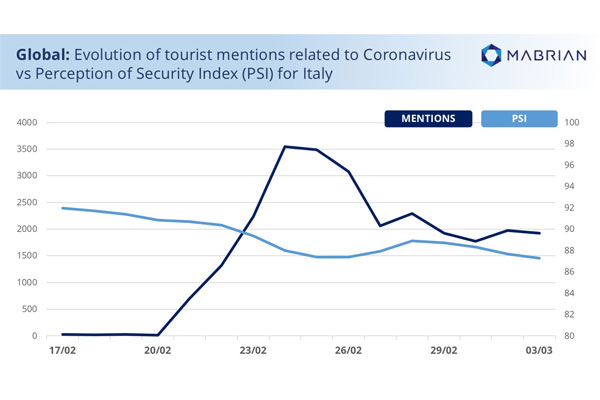 For Italy, at a global level, what can clearly be seen is that the impact of the public health crisis has had an immediate effect on tourism indicators with an exponential increase in tourism mentions related to the virus between the 20th and the 24th February. This peak in mentions practically coincides with the biggest drop in confidence for visitors on the 25th
February, where the Security Perception Index drops to its lowest point.

From then onwards, the volume of tourist mentions related to the crisis drops. However the sentiment obtained in these mentions with regard to the Security Perception does not recover at the same rate, showing a new drop from the 28th onwards.

An analysis of the evolution of these indicators per origin market shows different patterns of response and sensitivity to the crisis. 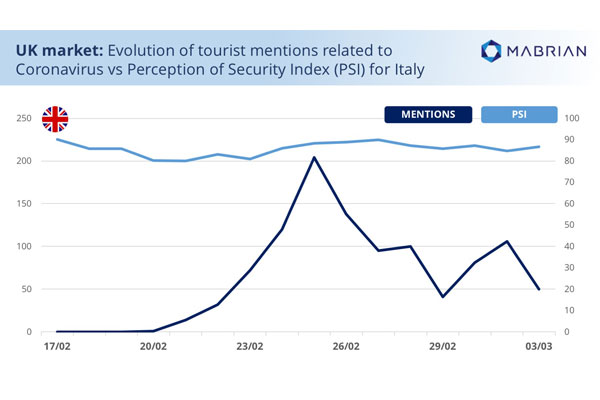 The British market shows the most premature loss of confidence with the destination from the outset of the information regarding the effect of the crisis in Italy. However, as days go by, despite an increase in the number of related tourist mentions, the Security Perception recovered at a faster pace than the remaining analysed markets. 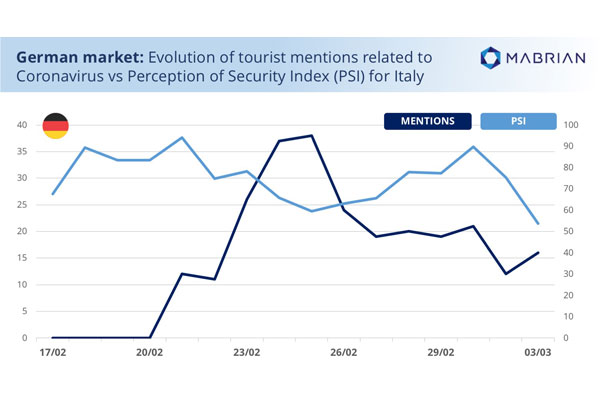 The German market shows the least impact in terms of tourist mentions related to the virus. However, the drop in confidence is significant and coincides with the timeframe of highest impact. 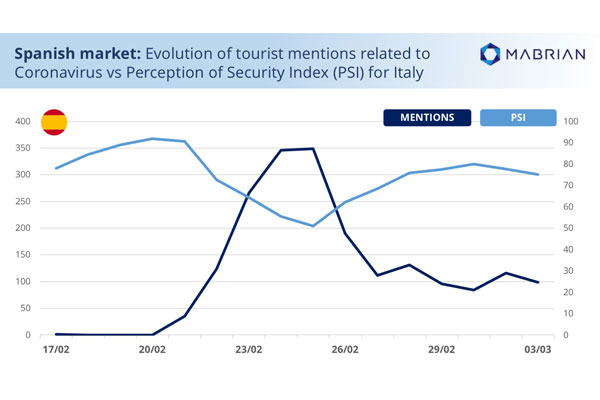 The Spanish market is the one that clearly shows the highest impact of the crisis in relation to the number of tourist mentions related to Coronavirus. The Security Perception drops significantly in the days where mentions are at their highest. It is nonetheless, the second fastest market in terms of recovery, behind the British market. 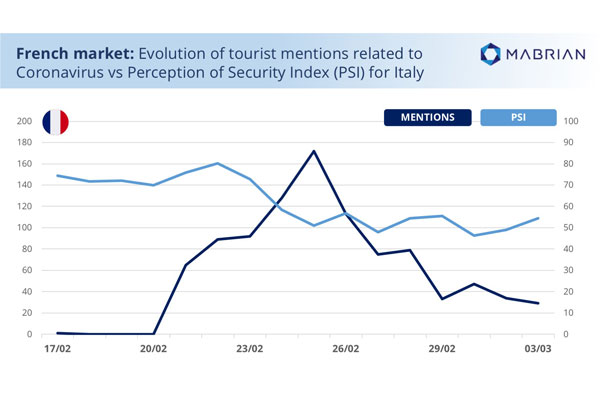 The French market shows a higher level of sensitivity towards the crisis in Italy. Despite the impact on volume of related tourist mentions being lower than the British or Spanish market, the effect on the drop in Security Perception is more acute, showing furthermore little signs of recovery.

Airlines rethink their prices. Evolution of average flight prices
Airline companies are some of the major players affected by this crisis. In view of the drastic drop in demand, they have been compelled to lower prices and cancel connections. Mabrian enables us to measure this impact by monitoring the evolution of average prices for flights to Italy between the 17th February and 31st March, in comparison to previous year values. For the study, the 25 main airports in Italy have been taken as a sample and all routes and airlines operating from the origin countries have been analysed. 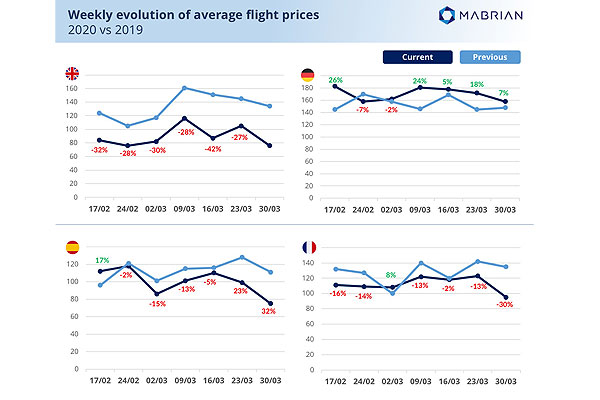 The market most affected in terms of flight prices is the British market, with an average drop of around 33% throughout the period analysed, at some points even dropping to 43% to travel to Italy during the first week of March. The weekly average prices from Spain and France drop to a smaller extent (around 10% on average) but show differences of around 30% to travel in the last week of March. Germany is the only market analysed which shows a certain stability with respect to average flight prices compared to the previous year, even showing an average 10% rebound, which could be related to the type of airline that connects Germany to Italy (regular vs low cost).

Hotel managers with no room for manoeuvre. Evolution of average prices
The tourism sector players with least power to react in the face of this drastic drop in demand are hotels. This implies that the crisis has more pronounced repercussions for them, dragging average prices to drops of over 30% in some cases. Mabrian shows the yearover-year evolution of average weekly prices for bookings of hotel stays between the 1st and the 19th March booked two weeks in advance. For the study, a total of 24,460 hotel prices for 3- to 5-star hotels in the whole of Italy were analysed.