Due to its rich historical importance and plenty of tourist attractions, Dhaka is also a popular tourist destination where people from other countries want to spend their vacations.

Dhaka is the capital city of Bangladesh and it is the seat of administrative, economic, and political activities of this country. It is a large city that holds the fourth highest population in the world and the majority of it follows the Islamic religion. Due to its rich historical importance and plenty of tourist attractions, Dhaka is also a popular tourist destination where people from other countries want to spend their vacations.

Why travel to Dhaka
Dhaka was a provincial capital since the medieval period, for which there are many historical buildings in this city. Tourists also make sure to visit the temples, mosques, churches, and forts here, due to their spectacular architectural beauty. Dhaka is the cultural capital of Bangladesh and tourists can enjoy different festivals held at various times of the year. Tourists also appreciate beautiful art forms cherished by talented Bengali artists.

When is the best time to visit Dhaka
As Bangladesh enjoys a tropical climate, the peak tourist season here is from late November to March. These winter months have a mild drop in atmospheric temperature and dryness, with the least humidity in the air. Therefore, sightseeing is more enjoyable at this time, compared to other months of the year.

How much it costs to go backpacking in Dhaka
Bangladesh is not an expensive country and thus, tourists do not need to spend a lot to visit Dhaka. The cost of hotel accommodation ranges from $5 to $75, depending on the grade of the hotel booked. Averagely, a meal can cost $ 2 – 6 in any local eatery of Dhaka. Most temples and mosques can be entered for free while a few historical monuments may need an entry fee of $ 1 – 2.5 only. The costs of getting around also vary from $ 0.1 – 9, depending on the mode of transport.

Visas for Dhaka
Foreign tourists can apply for a tourist visa, which is also applicable for their family members accompanying them on a trip to Dhaka. This visa has a maximum limit of 6 months, after which it cannot be extended or converted to another visa type. However, most people apply for a visa after landing in Dhaka airport, which has a validity of 30 days only.

What to pack when traveling to Dhaka
As Bangladesh is a Muslim country, tourists should wear conservative dresses while visiting Dhaka. They need to pack trousers, long skirts, full-sleeved shirts or tops, cotton salwar suits or sarees, a light jacket or a sweatshirt, and flat sandals. They should also carry sunglasses, a hat, an umbrella, their medicines, a first-aid kit, and necessary toiletries.

Travel insurance for Dhaka
Though it is not mandatory, tourists are advised to buy a travel insurance plan from a reputed insurance company. This insurance will protect them from loads of unexpected expenses, caused by accidents, sudden illnesses, or losses of their belongings while visiting Dhaka.

How to travel in Dhaka
There are plenty of flights that run between Shahjalal International Airport of Dhaka and various other cities in the world. Tourists can fly Dubai to Dhaka on flights operated by Gulf Air, Biman, US-Bangla Airlines, Qatar Airways, Emirates, and many other airlines. However, tourists from India prefer to take buses running from Kolkata or trains running between these two countries.

Attractions in Dhaka
Tourists usually do not miss visiting Lalbagh Fort, Ahsan Manzil or Pink Palace, and Liberation War Museum in Dhaka. Sadarghat is the waterfront of this city, housing several ports with numerous ferries, cargo boats, and small wooden boats sailing on the Buriganga River. Dhaka Shipyard is another tourist attraction and the Parliament Building of Dhaka is notable for its unique architecture. 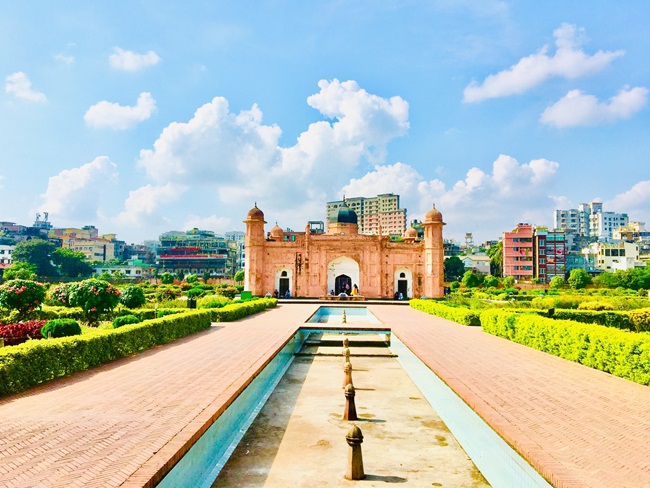 Photo by Shafiqul Islam on Unsplash

Dhaka famous cuisine
Bangladeshi cuisine is marked with lots of spices, as per the culinary preferences of local people. Hence, tourists can taste Haji Biriyani, Chui Jhal Mangsho, Kala Bhuna, and some Mughlai cuisines usually prepared during Iftar. They should not miss famous Bengali sweets, like Ras malai, Balish Misti, Monda, Mishti Doi, Kachagolla, and Chomchom while visiting Dhaka. Dhakai Bakarkhani is a popular crispy snack that satisfies all foodies.

Therefore, Dhaka can be a favorite tourist destination for many passionate travelers, where they can enjoy a superb vacation.