Company delivered a total of 30 jets in the third quarter of 2021, of which nine were commercial aircraft and 21 were executive jets (14 light and seven large).

The airline received the first E195-E2 of the 25 jets it has on order, at the beginning of 2021, with all E2 being covered by this contract. Currently, KLM Cityhopper already operates a total of four E195-E2 and a fleet of 49 first-generation E-Jets.

“As the operator with the largest E-Jet fleet in Europe, KLM Cityhopper has vast experience with E-Jets operations and maintenance – and very high standards, especially regarding aircraft availability. This contract is a great endorsement from KLM Cityhopper and continues Embraer’s success in providing comprehensive support and services for E2 customers,” said Johann Bordais, President & CEO, Embraer Services & Support.

Embraer’s Pool Program is designed to allow airlines to minimize their upfront investment on high-value repairable inventories and resources and to take advantage of Embraer’s technical expertise and its vast component repair service provider network. The results are significant savings on repair and inventory carrying costs, reduction in required warehousing space, and the virtual elimination of the need for resources required for repair management, while ultimately providing guaranteed performance levels.

The E195-E2, Embraer’s new generation aircraft, is specifically designed to cut emissions and noise footprint. The E2’s environmental credentials are impressive. The E2’s low external noise level is already well below planned future ICAO limits. Carbon emissions are almost 10% lower per trip and 31% lower per seat. In a typical year, each E195-E2 will emit 1,500 fewer tons of CO2.

The Praetor 500 boasts an impressive, best-in-class range, capable of non-stop flights of 3,340 nm at long-range cruise speed and also unparalleled runway performance under snowy and wet conditions. The aircraft is an excellent choice for AirSprint to provide non-stop flights from hundreds of airports coast-to-coast in Canada—with service across North America, the Caribbean, Central America, Hawaii and Europe.

“We are pleased that our partnership with AirSprint, which began in 2016, continues to grow as they expand their fleet. When we completed the first Legacy 450 to Praetor 500 conversion earlier this year, they were delighted to provide their customers with direct access to more Canadian destinations and experiences. The Praetor 500 is an excellent choice as the company continues to grow and holds the highest standards for all customers,” said Michael Amalfitano, President & CEO of Embraer Executive Jets.

Not only does the Praetor 500 offer best-in-class range and the lowest cabin altitude in its class, it’s the world’s most disruptive and technologically advanced midsize business jet. In terms of technology, it’s the only midsize business jet with full fly-by-wire flight controls and turbulence reduction capability. It also features a true six-foot-tall, flat-floor cabin, stone flooring, a wet galley, and a vacuum lavatory—all with best-in-class baggage space.

“To be the first in Canada to accept a new Embraer Praetor 500 helps to solidify our position as an industry leader,” said James Elian, President & CEO of AirSprint. “AirSprint spearheaded Fractional Ownership in Canada. We were the first then, and over 20 years later, our team continues to deliver a private aviation experience above all others. Our growth as a company is due to our Fractional Owners' commitment—and our long-standing relationships with stellar companies like Embraer.”

AirSprint’s acceptance of the new Praetor 500 will also be its first brand-new jet with the redesigned paint job. The new livery—elegant and distinct—is a true application of the AirSprint brand.

Embraer delivers Nine Commercial and 21 Executive Jets in 3Q21
Embraer delivered a total of 30 jets in the third quarter of 2021, of which nine were commercial aircraft and 21 were executive jets (14 light and seven large). As of September 30, the firm order backlog totaled USD 16,8 billion. 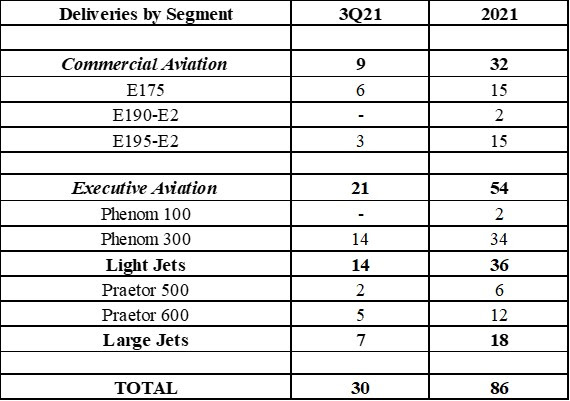 During 3Q21, in the executive aviation segment, Embraer delivered its 1,500th business jet. The milestone aircraft was a Phenom 300E, the best-selling light jet for nine years in a row, which was delivered to Haute Aviation, a Swiss company focused on charter, brokerage, and aircraft management.

In the commercial aviation segment, Embraer announced the sale of 16 new E175 jets to SkyWest, Inc. for operation in the Delta Air Lines network, adding to the 71 E175 jets SkyWest already operates for Delta. The E175 aircraft will fly for Delta under a Capacity Purchase Agreement (CPA). The value of the contract, which is included in Embraer’s third quarter backlog, is USD 798.4 million, based on list price.

In the Services & Support segment, Embraer signed several contracts during the quarter. Porter Airlines signed a major aftermarket support package with Embraer for Porter’s E2 fleet of commercial aircraft, for up to 20 years. Embraer also signed a Pool Program agreement with CommutAir, a United Express carrier, to support the airline’s ERJ 145 jet fleet, and an extension for Pool Program with Cobham, in Australia, to support its three E190s. Also, in Australia, Embraer signed a services agreement with Alliance Airlines, which will provide materials support for the carrier’s fleet of E190s. 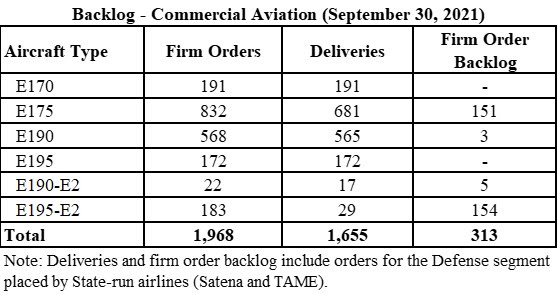