NEW YORK, NY – It’s no secret that Americans love to travel. In fact, direct spending by resident and international travelers in the U.S. averaged $2.7 billion a day in 2016. With such a large and robust market comes increased competition from a handful of online travel agents and top travel sites that seek to provide travel services to discount-hungry consumers. To help brand marketers for OTAs and other top travel sites better understand what consumers are saying in both their online and offline worlds, Engagement Labs has released its latest TotalSocial rankings of the top-performing OTA brands in the U.S.

The report looks at how each travel site performed in social conversations over the past six months and compared them to a previous ranking of the top OTA brands in June 2017. According to the analysis, most online travel websites tend to perform better in offline (face-to-face) conversations when compared to online (social media), even though each of these brands operate online. In fact, the only website whose performance runs counter to this rule is Kayak. The Company’s online scores were higher than its offline scores.

The analysis is unique in that it combines offline and online consumer conversations, and is based on Engagement Labs’ proprietary TotalSocial data, which continuously measures the most important drivers of brand performance in terms of social media and word of mouth conversations.

According to Engagement Labs, Expedia, which was previously ranked second, moved into the number one spot in the ranking and surpassed TripAdvisor. The shift was fueled by Expedia’s increase in online volume, which means that consumers are talking more about the OTA in social media conversations. In August, the company hired its new CEO, Mark Okerstrom, whose plans include emphasizing its travel agent and customer service offerings. 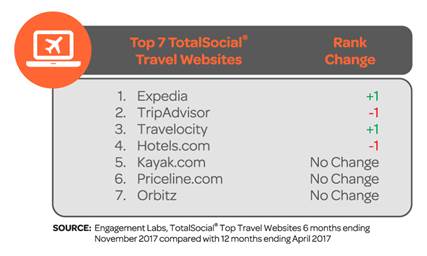 While Expedia rose to the top of the list, TripAdvisor fell to number two in the ranking, due to a steep decline in its online and offline influence scores. Engagement Labs defines influence as how well the brand connects with the everyday influencers who have the largest social networks in both the offline and online worlds.

Travelocity, which moved up from its previous spot at number four to third in the ranking, experienced an uptick in offline sentiment - which means that consumers are having more positive face-to-face conversations about the brand. The travel website gained an edge and saw significant ROI through its unique email marketing campaign that offered $400 vacation packages to its customers. The company also recently launched a campaign in partnership with popular online dating app Tinder, “Be My Gnomie,” targeting millennials and offering a 10-day Caribbean trip for two.

“With so much competition among travel websites and booking tools, it’s no wonder that the top OTA brands are increasingly fueling face-to-face conversations,” said Ed Keller, CEO, Engagement Labs. “Travelocity is a great example of a brand that saw a boost in its offline scores, particularly in offline sentiment, after launching several marketing campaigns to better engage its customers - proving that smart marketing tactics will not only resonate with consumers, but can improve a brand’s ROI.”

Another OTA that experienced a decline in the rankings is Hotels.com, which dropped to fourth from the third spot. The hotel booking website saw a decline in both offline and online sentiment and influence - demonstrating that consumers are not speaking as positively about the brand as they were six months ago during the previous analysis. In addition, Engagement Labs identified that another area for improvement is the brand’s ability to engage everyday consumer influencers both online and offline.

Tags:
Engagement Labs
About the author