Kailash Manasarovar Yatra - The inside story

The Lake Manasarovar continues to be a baffling mystery to many scientists who want to know the reasons behind the sacred belief. However, sometimes nature gets an upper hand on science and this Lake at the foothills of Kailash Mountain definitely has been attracting pilgrims every year.

Kailash Manasarovar Yatra is known for its sacred value and journey to achieve Nirvana or peace of mind. It’s a life-transforming journey: Kailash Manasarovar, for thousands of explorers who embark on this journey every year, transcends their material life into a mystical one.

Lake Manasarovar
Lake Manasarovar or ‘Manas Sarovar’ is a sacred lake in the Kailash region, which is located at an elevation of 4590 meters above sea level. It is the highest freshwater lake and there are plenty of mythological stories which are related to it.

The Hindu mythology
When we talk of Manasarovar Lake from the Hindu mythological point of view, it is believed that the lake was created in the mind of Lord Brahma and it was then manifested on Earth. This is why the Lake is considered to be pious and pilgrims to Lake Manasarovar are of the opinion that drinking water from this Lake will help them get rid of all their sins and they will be able to go to the abode of Lord Shiva after their death.

However, doing a parikrama of Lake Manasarovar isn’t easy and the weather can be most turbulent. As the lake has a circumference of almost 88 Km, a parikrama often entails 4 days and owing to the elevation and harsh climate, people face several hurdles, especially breathing problems.

Despite the troubles, pilgrim tours are hosted at regular intervals but pilgrims need to have their medical checkup done thoroughly before becoming a part of the journey. Generally, pilgrims are doing Lake Manasarovar parikrama in the bus and it takes around 3-4 hours to finish the parikrama. However, the Bon religion pilgrims do their parikrama (also known as Kora) by walk.

It is also believed that the seven sages and even other celestial bodies end up descending on this Lake to take a holy bath and it can be perceived in the form of a visible light during the Brahma muhurta which is the wee hours of the morning before sunrise. Many pilgrims doing the Kailash Manasarovar Yatra notice this auspicious light during their journey. Often it is known as the ‘Divya Jyoti’.

Not just Hinduism, even the Buddhists consider this lake to be sacred as they believe that Queen Maya had taken holy bath in this lake before she gave birth to Lord Buddha.

According to Hinduism, Lord Shiva, the destroyer of ignorance and delusion, sits on the top of a legendary mountain called Kailash where he sits with his wife Parvati in a state of eternal meditation. According to the Vishnu Purana, the holy Kailash mountain has four mouths and is made of crystal, ruby, gold and sapphire (lapis). Kailash is considered to be the pillar of the world located in the middle of the six mountain ranges forming the lotus.

According to Jainism, the first Jain Tirthankar, Rishabhdev, attained Moksha (liberation) near Ashtapada, situated on the side of Mount Kailash.

It is almost impossible for the common man to know what Mount Kailash is and what its potential is, it is natural to need a lot of penance and knowledge to understand it. 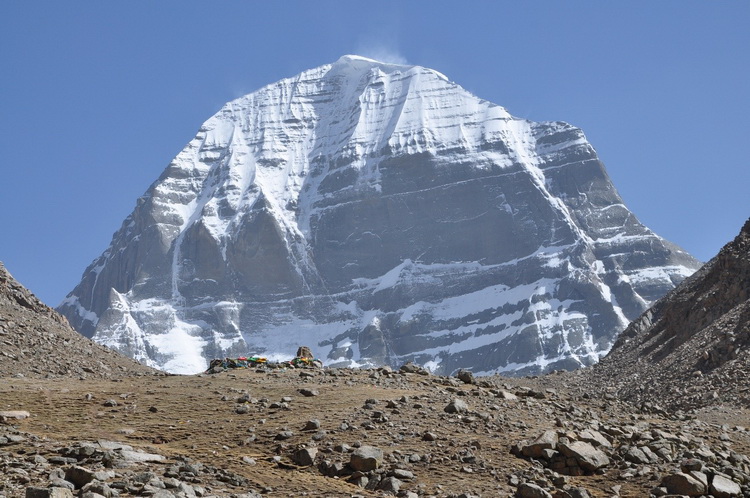 One visit to Kailash has seen improvements in people's lives. It is almost impossible not to be impressed by Kailash's visit. If you try to stay in Kailash with the realization of your body and mind, you will soon find expression in your mind.

The Raksas Tal
While Lake Manasarovar is the holiest of lakes for the Hindu mythology; just to the west of the lake, you have another lake which is known as Raksas Tal. It is a salt water lake and is considered to be the devil’s lake. This is why when on a tour to Lake Manasarovar, you will always be asked to steer clear of the Salt Lake.

In the Buddhist culture, it is believed that the two striking lakes are in fact symbolic of lightness and darkness. It is interesting to add that even scientists have observed that during tormenting and adverse weather conditions, Lake Manasarovar continues to remain calm but Raksas Tal though much smaller in size and having a crescent shape as opposed to round shape of lake Manasarovar ends up being mighty turbulent. No scientific principle could explain this striking contrast between two nearby located lakes.

Can anyone take a dip at the lake Manasarovar?
If you too nurse the desire to take a dip in the holy water of Manasarovar Lake, you need to first find out the pilgrim tour that is being hosted. Journey to Lake Manasarovar is always done in group tours so that you have a guide to assist you at all times.

While the tour guides would brief you about the tips and the preparation you should take beforehand. It is important to know that this tour is going to test your tolerance level and it would be packed with several hurdles. Often the temperature gets too cold for comfort and at the same time, it is also hard to continue with the trip.

Mount Kailash Parikrama
The parikrama of the Mount Kailash is considered to be the hardest part of the tour and one should only agree to do it, if they feel their health is supporting them. Even prior to the tour, a thorough health checkup is done to ensure that you are ready for this challenging trip.

Once the parikrama begins, there is no easy way to get back to the base. Those who are unable to do the parikrama on foot can always get a horse to move around. Despite this ease, the parikrama can be ridiculously hard to complete. Read here the tips for a successful Kailash Manasarovar Yatra.

Final words
Regardless of everything, one cannot negate the fact that the calmness and peace which you would feel is going to rejuvenate your mind and it ends up justifying the pains taken for the trip.

The Lake Manasarovar continues to be a baffling mystery to many scientists who want to know the reasons behind the sacred belief. However, sometimes nature gets an upper hand on science and this Lake at the foothills of Kailash Mountain definitely has been attracting pilgrims every year.

Some people believe that simply standing in front of the lake and taking in the sight is bound to help you attain moksha because the peace you feel reverberates inside your soul.

When I first visited Mount Kailash and Lake Manasarovar, I logged it as a lifetime achievement. It was for me so heaven-met-my-eyes that I couldn’t stop visiting it again and again. It’s the third time and I can’t get enough of the majestic view of the earth that visitors cherish a lot.

I must say that the Yatra was tough prior to 2010 because of poor transportation, infrastructural impoverishment, and inadequate communication in the vicinities of and towards the Kailash range. But after the road upgrade by the Indian Government in the 80 km stretch and the Chinese government along the borders, the journey to the extraordinary Shiva Kingdom has become easier as ever. Your transport vehicle will reach as far as Darchen, the village closest to the foot of Mount Kailash.

If Kailash Manasarovar Yatra is your ultimate destination, make it both comfortable and memorable with the services of the private agencies, it’ll be easy for you.