More than 92,000 passengers and crew members visited Montreal in 2015

Tatiana Rokou / 02 Nov 2015 08:28 2866
0
SHARES
00
According to preliminary numbers, more than 92,000 passengers and crew members transited through the cruise terminal this season, representing a nearly 30% increase over the 2014 season and a 94% hike since the Montreal Cruise Committee was created in 2011.

MONTREAL - As Montreal says goodbye to the Regent Seven Seas Cruises – SS Navigator, the city's cruise season is coming to a close -but only after a record season. The results for 2015 confirm that Montreal is an essential destination for international cruise lines.

The season got started on May 12 and lasted until today. In all, Montreal recorded 73 cruise ships visits this year, which is 29 more than in 2014. According to preliminary numbers, more than 92,000 passengers and crew members transited through the cruise terminal this season, representing a nearly 30% increase over the 2014 season and a 94% hike since the Montreal Cruise Committee was created in 2011.

"Much to the delight of local business owners, a flood of tourists poured through the city's streets this year. Hotels also benefitted from this high-value clientele, as many travellers extended their trips and stayed a few extra nights in Montreal," said Yves Lalumiere, President and Chief Executive Officer of Tourisme Montreal. "I would like to applaud the excellent work we've seen from the Montreal Cruise Committee, whose main objective is to attract international-calibre cruise lines to Montreal." 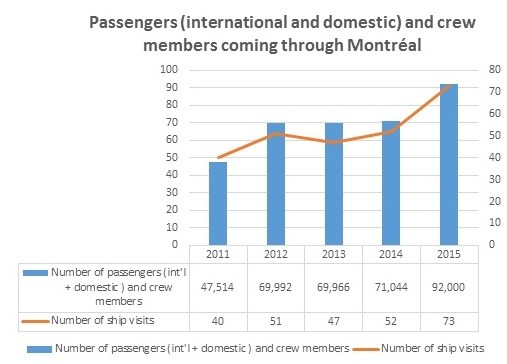 Cruise season on the portion of the St. Lawrence River that leads to Montreal is from May to November. The busiest months are September and October, when travellers come to see the fall colours and discover Quebec's natural and cultural offerings. According to data collected by the Montreal Cruise Committee, clients are primarily American (72%), Australian (8.5%), Canadian (7.5%) and English (4.5%).

The 2016 cruise season also promises to be excellent, with confirmations indicating that next year could be just as strong as this year.

"Once again, the numbers prove that Montreal's cruise market is growing rapidly, generating significant economic spinoffs for the entire city. I'd like to thank the Montreal Cruise Committee, as these results are in large part thanks to their efforts. At the Montreal Port Authority, we continue to work on the restoration of the Alexandra Pier and the maritime terminal, which will position Montreal as an international port of call that offers outstanding quality to cruise lines and travellers," said Sylvie Vachon, President and Chief Executive Officer of the Montreal Port Authority.