One in four travelers had trips impacted by medical, weather, carrier delays

Nearly one-quarter of Americans (23%) said their travel plans were impacted by medical conditions, natural disasters, including severe weather; or mechanical or carrier-caused problems, according to a recent survey conducted for the US Travel Insurance Association.

Survey respondents were asked whether they had to cancel or interrupt their travel plans, or whether their trip was delayed from spring 2013 – fall 2014, for one or more of the following reasons which are generally covered by travel insurance: 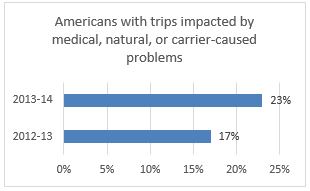 Households with children, and 18—34 year olds continued to be the largest single demographic groups among impacted travelers who purchased travel insurance. And both groups grew.  Among people whose travels had been affected 56% (vs. 30% last year) of 18 – 34 year olds, and 50% (vs. 33% last year) of households with children purchased travel insurance.

Most are Likely to Buy Insurance for Exotic Destinations
The survey revealed that Americans are most likely to purchase travel insurance for trips to more exotic destinations and for cruises (24% and 21% respectively).  Road trips plus weekend getaways (5% each) and ski trips (3%) proved the least likely for purchasing travel insurance.

These are findings from an Ipsos poll of 1,005 U.S. Adults ages 18+ conducted on behalf of USTIA.  Data was collected from December 2-4, 2014 and is considered accurate to within +/- 3.5 percentage points of the entire U.S. population.

Evaluate your Needs
According to UStiA, the survey confirms that more Americans are realizing the benefits of purchasing travel insurance.  Depending on the policy, travel insurance can:
Tags:
surveyUS Travel Insurance Association
About the author