Despite a stronger finish for South African tourism statistics in the final quarter of last year, overall SA tourist arrivals are down -6.8% for 2015, compared to those arrivals recorded during 2014.

Lee-Anne Bac, director Advisory Services at Grant Thornton says: “Tourism arrivals only grew by 7.5% during 2014 which in effect means that 2015’s negative performance has wiped out two years’ worth of vital tourism growth.”

Bac did emphasise that while significant losses were recorded during the first nine months of 2015, it was the final quarter of the year – from October to December – which helped to “save” South Africa as significantly improved statistics and data was recorded.

According to Grant Thornton’s analysis, for the 2015 year, South Africa experienced its biggest loss from African tourists where a decline of -7.3% was recorded, compared to +9% growth recorded during 2014.

“It is interesting to note that African air arrivals – those African tourists who enter South Africa via an airport – increased by 1.8% in 2015,” continued Bac. “But this then highlights even greater losses experienced in the number of land border African arrivals over the past year.”

Overseas tourists to South Africa, which are defined as visitors who are citizens of a country outside of Africa, declined by -4,9% in 2015.

“The overseas tourism market stabilised notably during October (-0.1%) following a disastrous first nine months of the year,” adds Bac. “This recovery showed even greater improvements with +6.4% recorded for November and +6.0% for December 2015.”

When analysing the overseas tourism figures for 2015, Grant Thornton’s data highlights that the -4.9% decline has unfortunately eroded all of the meagre gains achieved during 2014 (2.9%) and even some of the growth achieved in 2013 (4.5%). This equates to nearly 2.5 years of growth in overseas tourist arrivals lost over the past year. 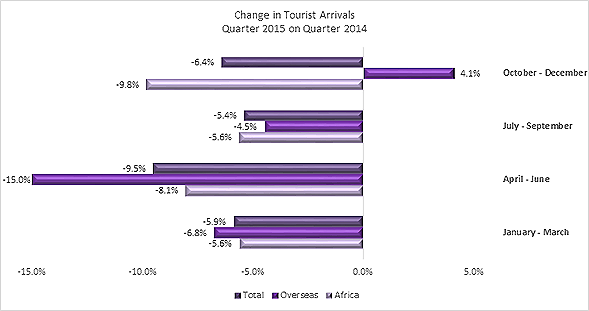 South Africa experienced significant losses in terms of tourists from China during the first seven months of 2015 but remarkable growth during the final four months of last year saw Chinese arrivals ending +2.2% higher than those recorded during 2014.

“It’s important to remember, though, that 2014 was a disastrous year for arrivals from China with a -23% decline recorded in overall tourist arrivals,” says Bac. “This highlights that we have a long way to go to make up for these losses.  However, based on arrivals in the past four months, we are extremely hopeful that new records can be achieved quickly to bring us back on track in terms of this very important market for our nation.”

Other key tourist arrivals during 2015 were dismally down compared to the previous year. Some of the Biggest Losers for 2015 were:
In terms of our other key source markets for tourists to South Africa visitors from the UK were marginally up at +1.4%, while Germany (-6.5%), USA (-3.9%) and India (-8.5%) also recorded negative performance during 2015.

“The past year has been extremely tumultuous for the tourism sector and various economic and social issues both at home and in some source countries coupled with immigration amendments caused great concern. However, one thing is for certain, much of this is now behind us and South Africa’s tourism sector is resilient. Recent changes to travel laws and the sheer nature of this industry will hopefully help it to rebound from its current decline in the months and years to come,” Bac concludes.