Revealed: Corfu is the most relaxing destination for a city break

In second place in Radical Storage’s analysis, is the Portuguese city of Funchal, on the island of Madeira.

Radical Storage analysed the most popular city break destinations from Europe, revealing the Greek city of Corfu to be the top destination for a relaxed city break.
- The Greek city of Corfu is the best destination for a wellness-inspired city break for European travellers, followed by  Funchal, Zadar, Dubrovnik, and Salzburg
- The least stress-free destination for European holidaymakers is London, followed by Moscow, Istanbul, Rome, and New York
- The cities with the most public spaces per square mile are Dubai and Rhodes
- Valletta, the city of Ibiza Town, and Geneva are home to the most 4+ star rated spas per square mile
- Rhodes and Faro are the least densely populated wellness destinations

For many, a city break holiday is a chance to escape the stresses and strains of life at home, whilst also exploring local attractions and “tourist spots”.

To help city breakers and holidaymakers, Radical Storage analysed some of the most popular weekend and short-stay city destinations in and from Europe, ranking cities on 11 key factors; from noise and air pollution, to the number of 4* restaurants per sq. mile and green spaces available.

Most relaxing city break destinations
The analysis found the Greek city of Corfu is the most stress-free destination for a getaway, scoring 78.9% in the wellness analysis. With positive scores coming from the low light, noise and air pollution recorded in the city, in addition to easy transit times to and from the island’s airport.

In second place in Radical Storage’s analysis, is the Portuguese city of Funchal, on the island of Madeira. Low levels of city density, noise and air pollution, as well as competitive meal cost (a mid-range meal for 2 people costs just £28), saw the city rank highly with a score of 71.2%.

Completing the top five cities for wellness breaks are: Zadar, Dubrovnik, and Salzburg.

The two Dalmatian coastal cities of Zadar and Dubrovnik scored most positively on air and noise pollution, with a high density of four-star restaurants within the city’s help to see them score highly with 68.3% and 67.6% respectively.

Rounding off the top five, the Austrian city of Salzburg scored 67.3%, scoring well in regard to light pollution and transit times to and from the airport.

The not so relaxing city break destinations
At the other end of Radical Storage’s findings, London was found to be the worst city for a stress-free break, with high light pollution levels and a lack of 4 star rated restaurants per square mile seeing the scores for England’s capital plummet.

The second worst city for a ‘wellness break’ is Moscow, scoring just 31.0% in our analysis. The key areas that impacted Moscow’s score were the high levels of light pollution, long transit times between the airport and city, and few 4+ star rated spas, viewpoints and restaurants per square mile.

Rounding off the bottom five cities in our analysis of wellness break destinations are Istanbul, Rome, and New York.

The sheer density of New York, along with the accompanying high noise and light pollution saw the US city rank the fifth least stress-free city in this analysis.

Istanbul and Rome both ranked poorly in our analysis due to their high levels of noise and light pollution, as well as the density of 4+ star rated spas, viewpoints and restaurants per square mile.

In response to the findings of their study Giacomo Piva, CMO and Co-Founder of Radical Storage comments:

“For many travellers and holidaymakers, the chance to visit a new city and destination is also a chance to relax, with this in mind we wanted to help people find the best destinations for a relaxing break and where they can enjoy the attractions of city life but also relaxation.”

“As our study shows, many of the most relaxing destinations are lightly populated but as the results also show, an abundance of attractions and relaxing spots for tourists to enjoy, as well as a range of high percentage of top quality restaurants.”

“At the other end of our study, it’s revealing that London came last. Despite London having a huge number of restaurants, the percentage which are rated 4 stars and above by patrons suggests more could be done to help improve the hospitality industry, with the densely packed city also suffering from high noise and light pollution.”

“With many travellers likely to be somewhat anxious as travel opens up again, we hope that finding relaxed and well-appointed city breaks might bring back a sense of normalcy, easing people back into exploring new destinations and cultures.” 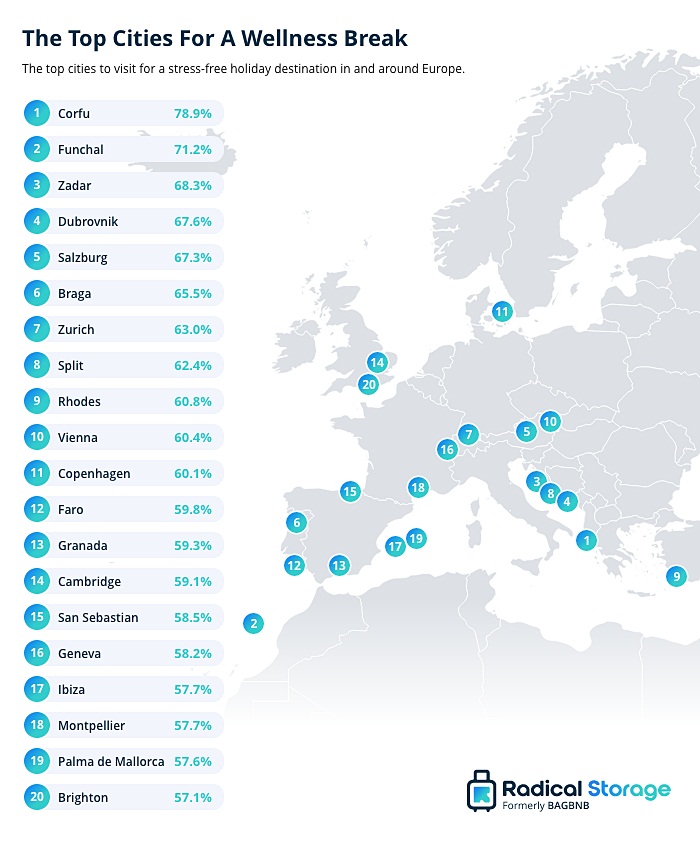 Tags:
Radical Storage
About the author