Southwest Airlines the number one airline brand on TotalSocial | TravelDailyNews International
New Articles
Hotels & Lodging
At year-end 2020, Europe’s hotel construction pipeline stands at 1,905 projects/307,093 rooms
Aviation
Radixx and Air Moldova sign multi-year agreement to increase sales and enhance customer experience
Statistics & Trends
Cofton Holidays sees 182% increase in online bookings as Covid-19 roadmap is revealed
Special Interest Travel
Everything the LGBT+ travel market has to offer at ITB Berlin NOW
Statistics & Trends
London's most scenic view revealed, based on TripAdvisor reviews
Special Interest Travel
Generali Global Assistance to offer travel insurance for campers through RoverPass
Aviation
Alternative Airlines adapts to COVID-19 challenges and posts revenue of £9.4m in 2020
Special Interest Travel
IGLTA becomes a Partner of Copenhagen 2021 to support WorldPride and EuroGames
In Brief
Blair Estate awarded Green Tourism Silver status
Aviation
As EU air passenger traffic continues to tumble, the impact of blanket travel restrictions is laid bare
MICE Industry
Meeting and event planners have no reservations about new virtual tour service
Hotels & Lodging
LoungeUp launches a mobile key to allow guests to open their hotel room with their smartphone
Statistics & Trends
The 'Fusion Trip' trend: City and nature getaways
Cruises
Holland America Line extends cruise pause to include all departures sailing to or from a Canadian port in 2021
Hotels & Lodging
Five new design-led homes join Greece’s White Key Villas
Hotels & Lodging
Electra America and AKA team up to launch $500m. opportunities hotel investerment fund
Aviation
Embraer’s Phenom 300 becomes world’s best-selling light jet and most delivered Twinjet in 2020
New Appointments
Benchmark announces the appointment of Chris Steffich as General Manager for the David Rubenstein Forum at the University of Chicago
Featured Articles
How to plan a dream vacation to the Great Smoky Mountains?
Hotels & Lodging
Hotelbeds signs preferred partnership with House of Travel to increase distribution reach in the Pacific
Statistics & Trends
188 million Americans open to COVID-19 vaccine passport if required for travel despite privacy concerns
Featured Articles
How the pandemic changed travel
Technology
GlobalStar Travel Management and OneWurld, announce strategic global partnership
Headlines:
How to plan a dream vacation to the Great Smoky Mountains?
How the pandemic changed travel
Why visiting a new country is a great idea
Got injured during an overseas trip? Here's what you should do right away
Excellent tips for people who want to sleep soundly while traveling
Kailash Manasarovar Yatra - The inside story
Six ways to boost your summer holiday fun trip this year
How to prepare for your ultimate casino experience in Sweden
Want to explore Alaska? Here's how to make it happen
Timeshares: What is it and how it works
Things you should bring on every hiking tour
Nine best places in Australia for making memories
Three destinations to visit in a late era of Covid
Few incredible worldwide zip line experiences
Where can I surf in Kona?
NEWS AROUND THE WORLD

Southwest Airlines the number one airline brand on TotalSocial

NEW YORK, NY – The airline industry relies heavily on customer recommendations and reviews. However, due to a series of very public mishaps and renewed demands from the general public for better customer experiences, airline brands have been put under the microscope. For airline marketers, it has never been more imperative to understand the health of their brands, including what consumers are saying in both online and offline conversations.

To help airline marketers better understand where they stand and areas of improvement, Engagement Labs has released its trended TotalSocial rankings on the top performing airlines in the U.S. with respect to consumer conversations, for the last six months. The report is a follow up to the Company’s first analysis of the top-ranking airlines in March 2017. The analysis, which combines offline (face-to-face) and online (social media) consumer conversations, is based on Engagement Labs’ proprietary TotalSocial data that continuously measures the most important drivers of brand performance in terms of social media and word of mouth conversations.

According to Engagement Labs’ data, Southwest Airlines, which was previously ranked fourth, has ousted JetBlue as the number one airline brand on TotalSocial and pushed JetBlue down to fourth place. Southwest Airlines increased its TotalSocial performance due to its strength in offline and online sentiment, indicating consumers are talking positively about the company. For example, responding to the some of the scandals that have dampened the industry in 2017, such as United Airlines’ bad press and outrage from customers after the airline pulled a passenger off a flight, Southwest Airlines announced they will no longer overbook its flights. 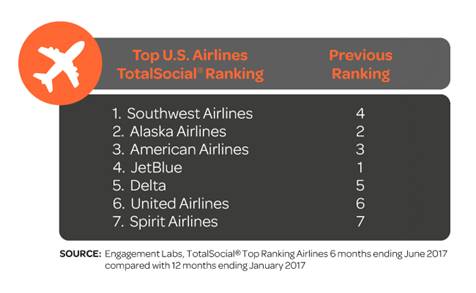 “Lately, it seems as if every major airline has been in the news regarding major flight delays, issues with customer service or inappropriate airline employees. However, while there has been negative conversation about the industry as a whole, Southwest Airlines has ‘flipped the script’ and sticks out from its peers in a positive way with a growing TotalSocial score,” said Ed Keller, CEO of Engagement Labs. “The company does exceptionally well due to its ability to focus efforts on its two most important audiences – customers and employees. One notable example was when a Southwest Airlines passenger with cancer had their luggage misplaced – including the medication they needed for chemotherapy – and one of the airline’s employees drove to the passenger’s house to personally deliver the suitcase in the middle of the night. It’s clear that Southwest’s customer service goes above and beyond.”

Within the past few months, JetBlue has seen its fair share of negative attention—especially after an incident in May that booted a family off of one of its flights. According to Engagement Labs’ report, incidents such as these have contributed to an increase in negative conversations about the brand, which contributed to its decline in online and offline sentiment. As a result, the brand saw a decrease in its overall performance, bumping it down to fourth in the ranking.

Keller continued, “It is extremely important for airline companies to understand the power of consumer conversations. Before consumers make a decision on which airline to fly, many think about past experiences, whether they were positive or negative, and look for recommendations, either by researching reviews online or talking to their peers. With a holistic view of what consumers are saying both offline and online, airline marketers have the opportunity to build relationships with their consumers and improve the brand’s performance and reputation.”

Meanwhile, the airlines which remained pinned to the bottom of the list, United and Spirit Airlines, continued to face customer outrage. Both have seen rising offline and online volume of conversations – indicating consumers are talking more about these airlines – but are declining in sentiment. For example, United Airlines’ offline sentiment scores decreased by 29 percent and its online sentiment decreased by 21 percent. Sometimes crises have a short-term impact and things return to normal relatively quickly—however, for United Airlines, that is not the case, demonstrating a need for the airline to invest in a strategy that will generate more meaningful and positive consumer conversations.

Tags:
Engagement Labs
About the author