The European countries that have the highest rated national parks

It is no secret that Europe is home to some of the most beautiful sites of protected nature in the world; from thick forests to glistening lakes, taking a walk in one of these European National Parks will give you the ultimate fresh air fix.

Whether you are looking for the perfect Instagram backdrop or to discover beautiful unexplored parts of the world, the experts at SaveOnEnergy.com/uk conducted a study to uncover which country is home to the highest rated National Parks in Europe, according to TripAdvisor.

Following close behind is Slovenia! Although they have just 1 National Park to offer, the scenery is beautiful, resulting in an average TripAdvisor rating of 9.72. This park will have you swiftly booking a flight to Slovenia after one Google search. The jaw dropping Triglav National Park covers 4% of Slovenian territory and is one of the largest national reserves in the whole of Europe. 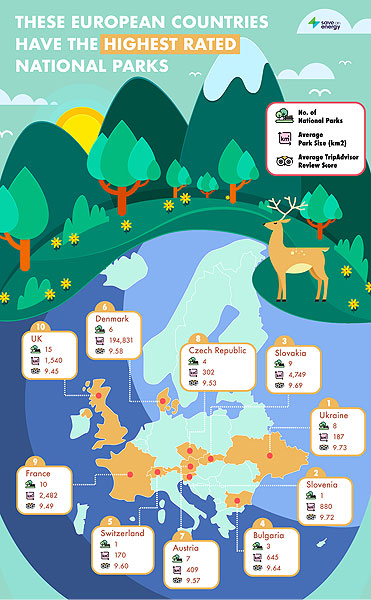 Tags:
TripAdvisorSaveOnEnergy.com
About the author