The state of the global travel market

To make things easier, Regiondo decided to look at the most recent data on the travel market and turn it into useful information so travel industry professionals can make better business decisions and prepare for the new year.

As 2019 is approaching, it's a good time to review your business priorities and plan the year ahead.

To make things easier, Regiondo decided to look at the most recent data on the travel market and turn it into useful information so travel industry professionals can make better business decisions and prepare for the new year.

In this post, you’ll learn about the global tourism market size and discover the key facts around it. Topics include:

● What's the current state of the global travel and tourism market?
● Which are the most popular tourist destinations in the world?
● Where do tourists spend the most?

After reading this article, you should expect to have a good idea of the global travel and tourism market as a whole.

There are two main categories here:

1) The number of international arrivals.
2) The overall spending on regional, country, and city levels.

This should give you a good idea of the global market size and the key metrics around it. 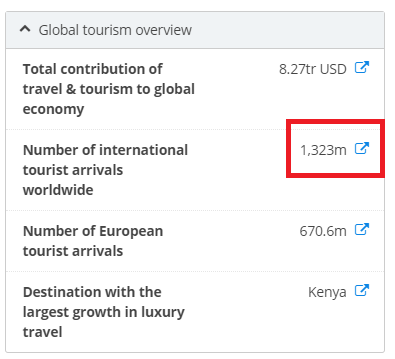 In fact, the number of international arrivals has been rising steadily over the past decade across all regions. 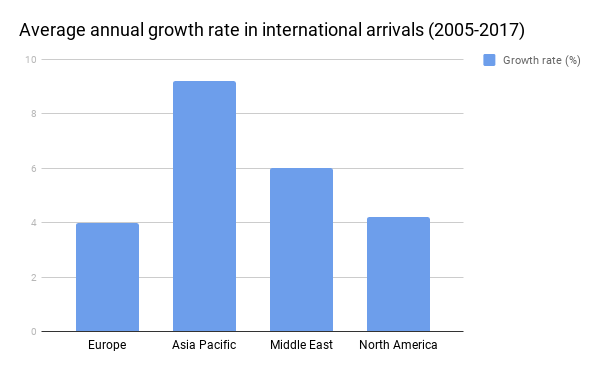 And while Europe is still the top tourist destination, Asia Pacific is the fastest growing region in recent years. With an average annual growth rate of roughly 9.2%, international arrivals grow at more than double the speed of Europe (4%).

That’s compared to an average of 6% in the Middle East, and 4.2% for North America. 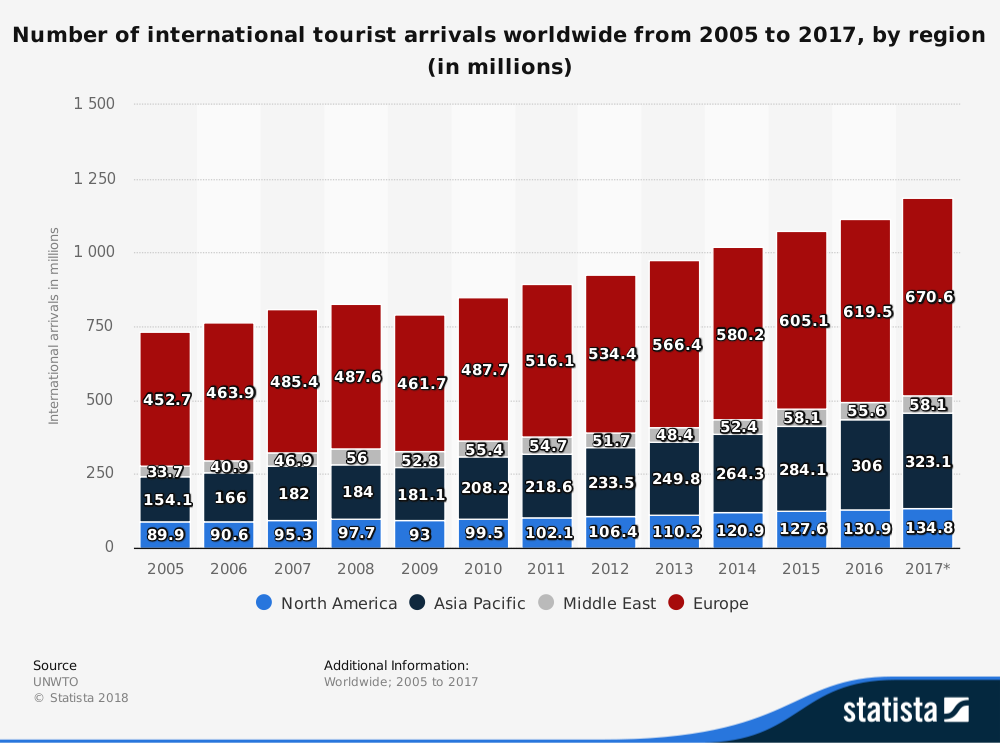 Asia Pacific follows with 323.1 million, while North America (134.8 million), and the Middle East (58.1 million) complete the list of the 4 biggest regions in terms of international arrivals.

The most popular countries
On the country level, the top 10 has a similar distribution to the regional level, with 6 of the top 10 countries being in Europe. 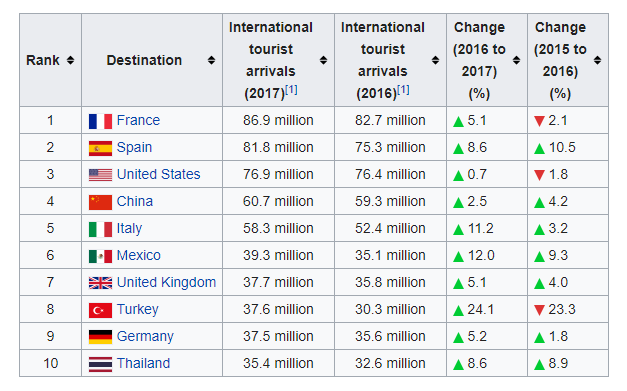 The US and Mexico represent North America while China and Thailand are the only Asian members (although they receive a considerable amount of visitors).

It’s worth noting the growth rate in Turkey, Mexico, and Italy. While Turkey is getting back to its 2015 levels, both Italy and Mexico are growing substantially in terms of international arrivals over the past 3 years.

The most popular cities
At the city level, European and Asian destinations dominate with only Dubai, Mecca, and New York making the top 20 outside of these regions. 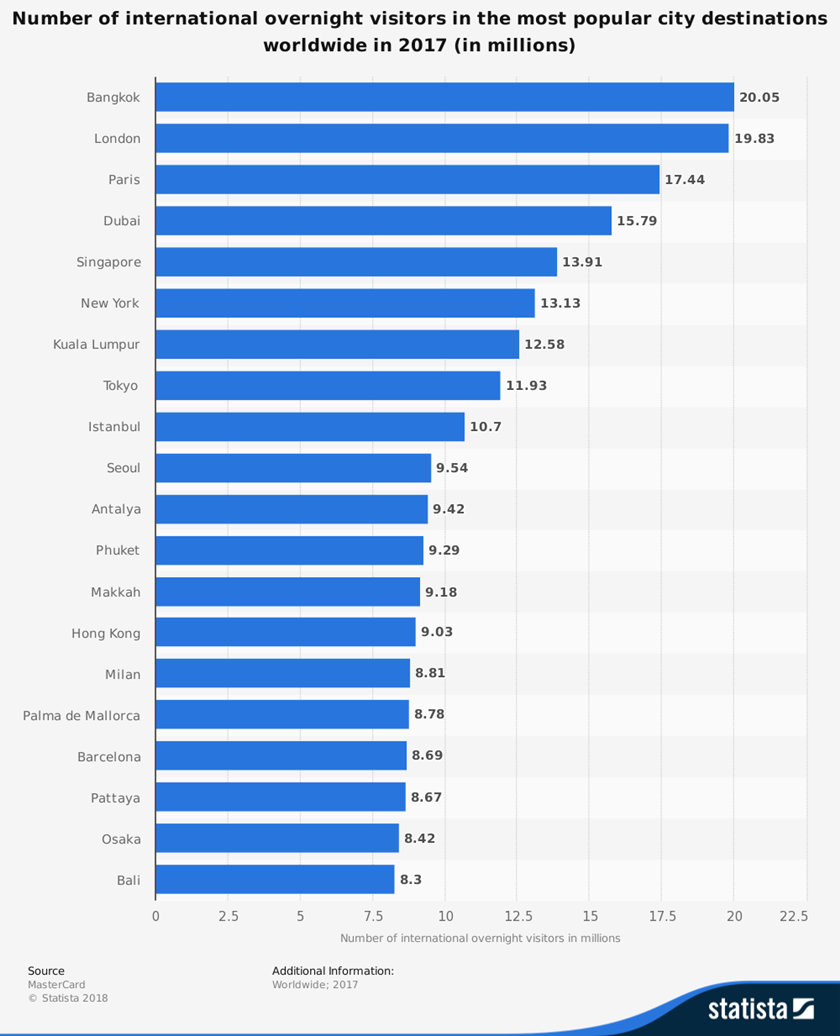 International tourism spending
In global terms, travel and tourism contribute an estimated 8.27 trillion dollars to the economy. That’s up from 7.61 trillion in 2016 or an increase of 8.7% on an annual basis.

The market has been growing consistently in both direct and total contribution to the world economy. 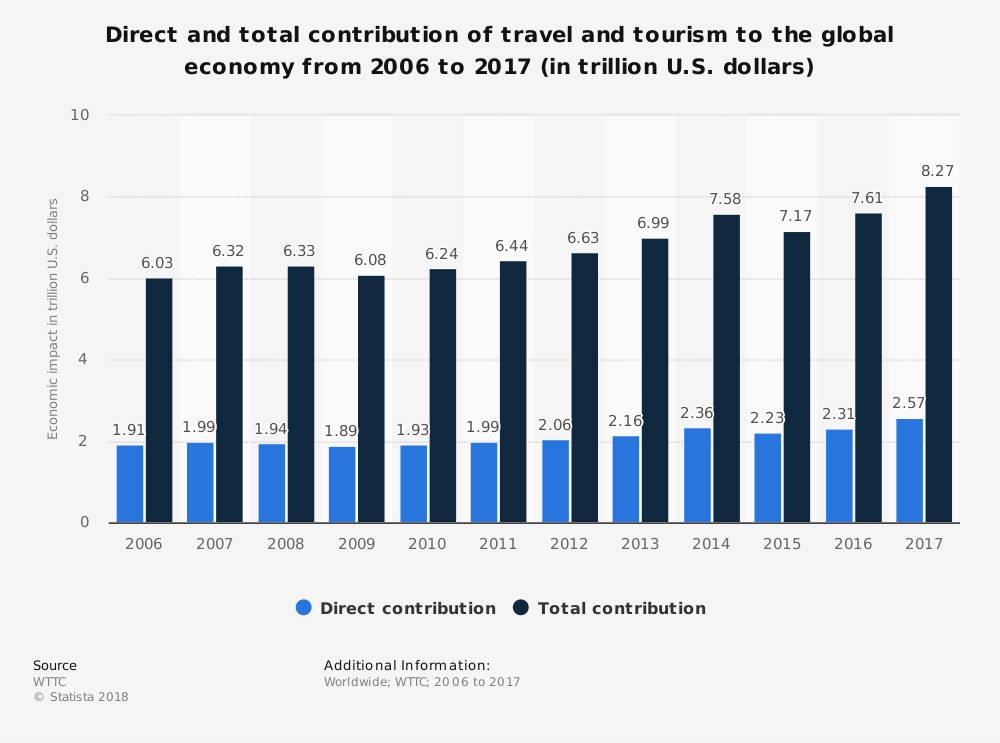 This is due to a combination of factors such as growing purchasing power in developing countries as well as an increasing population. At the same time, air travel is getting cheaper which has both a stimulating and balancing effect (as it reduces the average spend per traveler per trip, at least on transportation).

The biggest spenders by country
While developed countries are still responsible for the majority of tourism spending, for the last few years China has dominated in terms of overall spending by tourists. 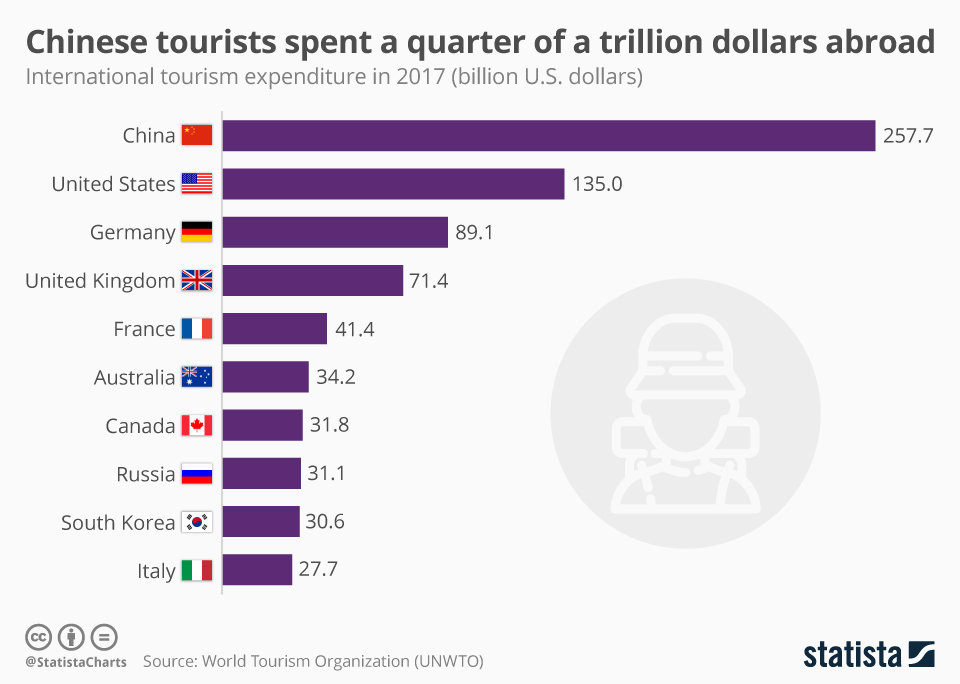 Russia is also in the top 10 during 2017, signaling that tourists from developing countries are becoming a significant part of international spenders.

The cities where tourists spend the most
Looking at the top destinations for tourist spending, the Middle East takes the top spot with Dubai and Mecca leading the way. 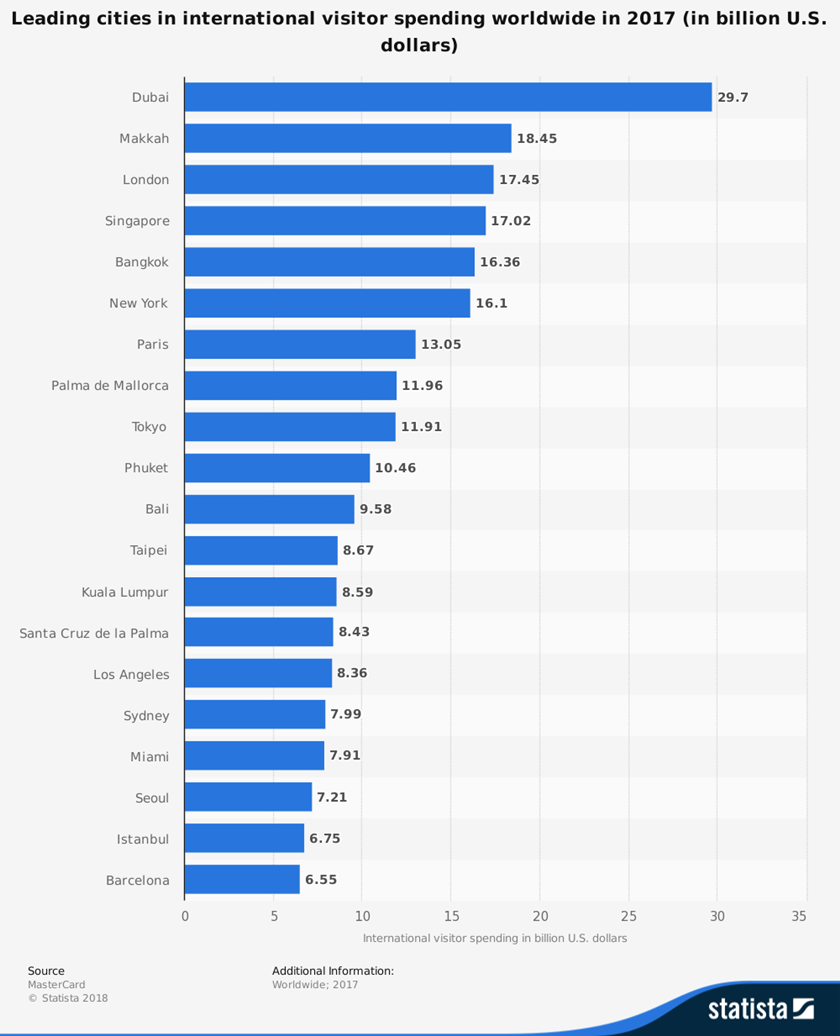 Spending is a function of the number of arrivals and the price index in a given city so there are considerable differences between the top destinations for international arrivals and the top cities in for tourist spending.

This is why, for example, Los Angeles and Miami are in this graph despite not making the top 20 most visited destinations.