Travelling deemed more important than marriage or buying a home

Tatiana Rokou / 22 Mar 2013 10:45 1705
0
SHARES
00
Almost one third of Britons are happiest travelling solo. More time off to travel would make 52% of Britons happier than a pay rise. A surprising eight percent of people in a relationship prefer to hit the road alone, and family members are the least popular people to travel with at just three percent.

On March 20, the world recognised the first ever International Day of Happiness, a day established by the United Nations General Assembly. To coincide a new survey reveals how travel factors into happiness in the UK and worldwide. 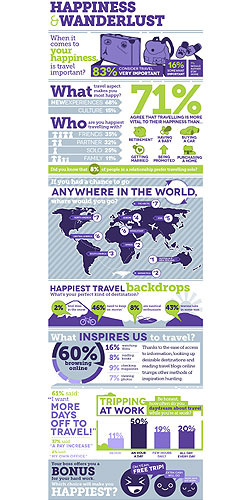 Britons are also more inclined to travel solo (30%) than people in other parts of the world (25%). A surprising eight percent of people in a relationship prefer to hit the road alone, and family members are the least popular people to travel with at just three percent.

Michael Edwards, managing director, G Adventures, says the results are indicative of the fact people are travelling more and realising there is a whole world out there to explore.

“We’ve always known the UK is a travelling nation and these results show their love of travel is still higher than the rest of the world. One of our core values is creating happiness and community and it’s evident through these results that travelling is key to people’s happiness.”

According to the global survey, travelling is more important to women than men and while men prefer to travel with their other half, women ranked “friends” as their ideal globetrotting companions.

Nearly two-thirds (61%) admitted that more time off to travel would make them happier at work and is more important than an increased salary or having their own office. When it comes to bonuses, half would opt for a free trip (52% in the UK) rather than cash or additional days off. Half the respondents confessed to daydreaming about travel for an hour daily at work, while in five spend the entire day fantasising about being abroad, away from the office.

When asked what aspect of travel makes respondents most happy, “new experiences” topped the list, followed by “culture” and “meeting new people”. Australia and New Zealand are the most desired destinations and nearly half (46%) of those surveyed enjoy engaging in active experiences when travelling.

Furthermore, more than half (57%) prefer to celebrate a happy occasion such as a birthday or anniversary somewhere abroad or overseas. When not travelling, 60 per cent of respondents find inspiration researching travel online.
Tags:
Traveltrends
About the author