Research by hotel booking platform, hoo, has revealed that the UK ranks within the top 10 for the greatest abundance of Blue Flag beaches. However, with a summer of staycations on the cards again this year, UK holidaymakers could be in for a squeeze on the sand.

The Blue Flag award is one of the world’s most recognised and is awarded to beaches based on a stringent number of environmental, educational, safety and accessibility criteria.

The UK is the only other nation to see the number of Blue Flag beaches hit triple figures, with 127 in total around our coastline. Handy given that foreign travel remains an uncertain prospect this summer and many of us are opting to stay put and holiday domestically.

However, hoo’s research shows that we could struggle to find room for our beach towels this summer, with a heightened number of visitors set to hit UK beaches once again.

With a population of over 67.2m, the Blue Flag beach to beachgoer ratio in the UK sits at just 0.19, pushing the UK down to 23rd in the list.

hoo Co-founder, Adrian Murdock, commented: “With the UK finally enjoying some outstanding and prolonged periods of sunshine, another summer of staycations is suddenly looking like the best plan for what’s been another year of uncertainty surrounding foreign travel.

Of course, the compromise with a relatively carefree holiday at home is the fact that our beaches are probably going to be rammed.

For those looking for a trip to the beach, planning ahead is the best way to ensure a day without any disappointment - and get there early. It’s also important to remember that while restrictions have been lifted, COVID-19 remains a threat so take the necessary precautions in busy locations such as the beach.” 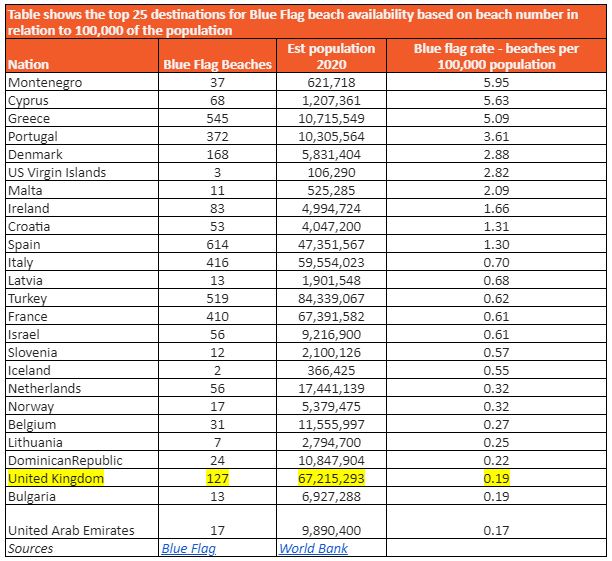 Tags:
Hoo
About the author