NEW YORK - Harnessing the power of social media to inspire more visitors to come and explore what makes Britain a GREAT destination is the focus of a campaign launched in New York by UK Culture Secretary John Whittingdale.

The GREAT Britain 'Home of Amazing Moments' campaign was launched at a reception yesterday with US tourism trade and industry representatives. The print and digital marketing campaign, being run by the United Kingdom's national tourism agency VisitBritain, will share memorable moments and unforgettable experiences that visitors can only get in Britain. The aim is to inspire and encourage even more visitors to come and explore the whole of Britain and find their own amazing moments.

The UK Government's Culture Secretary John Whittingdale said: "Millions of people visit Britain every year, thanks to our incredible mixture of historic architecture, stunning scenery, iconic sporting events, unparalleled music scene, and world-renowned museums and galleries. By asking visitors to share some of their amazing UK moments we want to build on their adventures and encourage others from across the US and abroad to experience the best of Britain."

The 'Home of Amazing Moments' campaign will captivate imaginations with snapshots of special moments, which evoke the feeling of 'being there' – the moments that travellers want to share with their friends, families and social audiences. 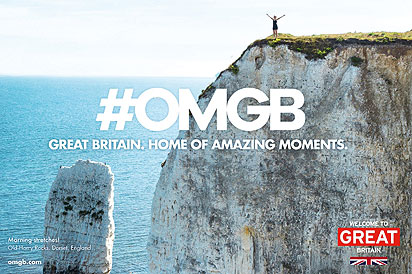 The campaign formally kicks off in the US in January 2016 in New York and Los Angeles with a three-month digital and print campaign that promotes the types of amazing moments travellers can only experience on a trip to Britain. This first phase aims to drive visitors to a website filled with captivating images, cinemagraphs and videos. Visitors to the site will be invited to share these images through their own social media channels using the hashtag #OMGB (Oh My GREAT Britain), and by doing so will have the chance to win a luxury dream vacation to the elegant city of Bath, England and a stay in a historic Scottish castle. The campaign will also use social media influencers, who will be sharing their own amazing moments from recent trips to Britain.

The second phase of the campaign, starting in April 2016, will invite visitors to upload images of their own memorable moments and experiences from their vacations in Britain using the hashtag #OMGB, some of which will be shared across VisitBritain's Twitter, Instagram or Facebook. VisitBritain is a frontrunner in the digital space for national tourist boards, ranking first among key competitors with over 3 million Facebook fans, 300,000 Twitter followers and more than 175,000 followers on Instagram.

VisitBritain Marketing Director Joss Croft said: "From feeling the frost in the air as morning mist creeps over Hadrian's Wall, to the whistle of the wind in your ears as Europe's fastest zip line whisks you over Snowdonia, to the roar of the crowd at Manchester United and the briny tang of sashimi-fresh mackerel from a Scottish fishing boat, we want to showcase those moments when you're part of something incredible and communicate the feeling of being there.  We know that our audiences want to be part of fun, innovative and immersive experiences and we want to share these amazing moments to inspire even more people to put Britain at the top of their list as the 'must-go-now' destination."

Research by VisitBritain published in November 2015 found that 84% of people surveyed in the US had used social media at some stage during their holiday planning while 70% said content posted online by friends would inspire them to visit a place. The research also found that people were most eager to share their own content if there was a high chance it would be recognised and promoted.

VisitBritain's research also found that personal recommendations scored top out of 22 options on what influenced or inspired US respondents about where to go on holiday, and were considered more influential than travel brochures, special offers or advertising.

The Great Britain 'Home of Amazing Moments' campaign is part of the UK Government's global GREAT Britain campaign, which showcases the very best of what Britain has to offer as a place to visit, study and do business.

Under this umbrella sits the global Welcome to GREAT Britain campaign which highlights what makes Britain a GREAT destination for tourists.

The US is Britain's largest and most valuable inbound visitor market. In 2014 Britain saw almost three million visits from the US, 7% more than the previous year. Visitors from the US also spent a record £2.9 billion in 2014, a 16% increase on 2013.

The first nine months of 2015 have broken previous records for overall inbound tourism numbers to Great Britain, with more than 27 million visits to Britain from January to September, a 3% increase compared to the same period last year.

Tourism is Britain's seventh largest export industry and third largest service sector. Inbound tourism is worth more than £26 billion to the UK economy.

John Whittingdale was appointed Secretary of State for Culture, Media and Sport on 11 May 2015. He was elected Conservative MP for Maldon in 1992. The Secretary of State has overall responsibility for strategy and policy across the Department for Culture, Media and Sport. The department's main policy areas are: tourism; arts and culture; broadcasting; creative industries; cultural property, heritage and the historic environment; gambling and racing; libraries; media ownership and mergers; museums and galleries; the National Lottery; sport; telecommunications and online.

Tags:
CampaignVisitBritain
About the author