Tatiana Rokou / 09 Oct 2015 11:24 2470
0
SHARES
00
Bond is back in SPECTRE and VisitBritain is once again utilising 007’s iconic international profile to show the world what makes Britain GREAT.

SPECTRE
, the 24th James Bond adventure from Albert R. Broccoli’s EON Productions, Metro-Goldwyn-Mayer-Studios, and Sony Pictures Entertainment, launches in cinemas worldwide from 26 October and in the US on 6 November, 2015.

To leverage the global fascination with James Bond and the international exposure the film affords to potential visitors to Britain, VisitBritain is today launching a global Bond is GREAT Britain film tourism campaign in partnership with Sony Pictures Entertainment and Metro-Goldwyn-Mayer Studios.

The Bond is GREAT campaign is kicking off across more than 60 countries to encourage 007 fans to choose Britain – the home of Bond – for their next holiday. 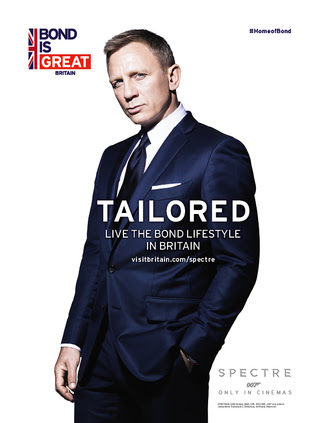 As the official national tourism partner for the theatrical release of SPECTRE, VisitBritain’s global campaign is using a mix of outdoor billboards, print, digital and social media. This includes exclusive ‘behind the scenes’ footage from SPECTRE through its dedicated campaign page VisitBritain.com/spectre. Three new Bond is GREAT images are also being released featuring James Bond, an Aston Martin outside Blenheim Palace as well as a scene from SPECTRE with James Bond in Whitehall.

Other highlights include the release of four new 360 images of key filming locations in SPECTRE including Blenheim Palace, Camden, Westminster Bridge and City Hall to be promoted internationally through VisitBritain’s extensive social media channels. The immersive 360-degree experiences will give overseas visitors a virtual opportunity to step inside some of the iconic British locations showcased in SPECTRE with the first, of Blenheim Palace, released on VisitBritain.com/spectre. The new images build on the series of hugely popular 360 degree images of some of the UK’s best loved landscapes and historical attractions launched earlier this year by VisitBritain.

It is the third time that VisitBritain, working in partnership with Sony Pictures Entertainment and Metro-Goldwyn-Mayer Studios, has partnered with the Bond franchise to motivate and inspire even more international visitors to come to Britain.

Its 2012 Bond is GREAT campaign around the theatrical release of SKYFALL resulted in international promotional coverage reaching 653 million people around the world as well as £3.5 million worth of exposure for the Britain brand and partners. That campaign positively affected travel with 16% of people who recalled the Bond is GREAT campaign having booked a trip to Britain and 35% of those who recalled the advert saying they strongly intend to visit Britain in the next three years. (SKYFALL also helped boost visitor numbers to Glencoe in Scotland after being used as a filming location with visits up 41.7% on 2012.)

VisitBritain Chief Executive Officer Sally Balcombe said: “We know that the link between tourism and film is a potent one. Recent films have demonstrated that they deliver a real increase in visitor numbers with just under half of our potential visitors to Britain wanting to visit places they have seen featured in films or TV so we are doing everything we can to capitalise on this ‘set-jetting’ phenomenon. That’s why we are working hard to encourage and inspire more people to holiday in Britain through our ‘Bond is GREAT Britain’ campaign, leading to a measurable increase in international visitor numbers and visitor spend across the nations and regions of Britain.”

As part of this year’s Bond is GREAT campaign, 007 fans from around the world will also have the chance to enter an exclusive online competition at visitbritain.com/spectre to live the Bond lifestyle in Britain – the prize includes a chauffeur driven Aston Martin, private visit to Madame Tussauds and a stay at one of the exclusive Radisson Blu Edwardian Hotels. There’s also a ‘Bond is GREAT’ advert featuring clips from previous Bond movies and exclusive SPECTRE footage on VisitBritain’s YouTube site and uploaded on to VisitBritain.com/spectre.

Inbound tourism is worth £26.2 billion a year to Britain and our culture and heritage is one of the main attractions for global visitors. SPECTRE provides a great international showcase for some of Britain’s iconic locations. The scope of Britain’s historical and cultural tourism offer along with its film expertise including its production talent and facilities, have been drawing film-makers to Britain for years.

Tags:
CampaignVisitBritain
About the author